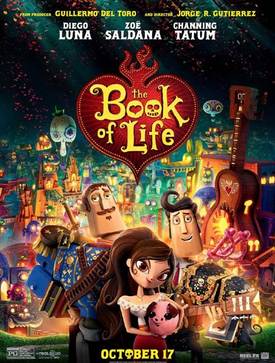 Most movies you take your kids to wouldn’t be filled with skeletons, death and the underworld. But when the movie is about Dia de Los Muertos or Day of the Dead, you can expect just that! But don’t worry, the movie is full of laughter, love and even a few great one liners that will stick with you after you leave the theater.

The Book of Life follows the story of Manolo, a boy destined to become a bull fighter who wants nothing more than to play music. His story is intertwined with his friends Joaquin and Maria, when two gods of the afterlife La Muerte and Xibalba make a bet over which young man will marry the beautiful Maria. The bet will not only result in the true destiny of both of the young men.

The Book of Life has stunning graphics, that are as full of color and as vibrant as any Day of the Dead celebration. And while the movie is filled with skulls, skeletons and death, none of it is handled in a way that might make it scary for children. Instead it is filled with love and laughter, and shows how other cultures honor their dead years after they have passed.

The characters all appear to be carved out of wood in the movie, and this is because the storyteller has wooden figurines of the characters as she tells a group of children about the Book of Life. This leads to some stiff movements, and almost stop motion type action. It also gives the movie a unique look that kids of all ages will enough.

I personally think 20th Century Fox hit it out of the park with this one, and can’t wait to see it again. The Book of Life is in theater’s everywhere on October 17th.