Over the years, we’ve enjoyed several shows live at the theater – and while we’ve considered it, we had yet to enjoy the Blue Man Group. I’ve seen clips of the show on television, and of course on Arrested Development, but never live. So when we were offered a ticket to see the Blue Man Group as part of Blogger Bash, I jumped on the opportunity. Why not enjoy a live show while in New York? 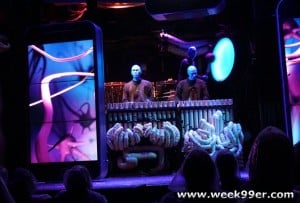 I have seen enough about the Blue Man Group shows to know a little bit, so when I looked at my ticket they gave me I laughed – “Poncho”. I had no designs of being covered in food, paint or anything else – so I made sure I traded seats with another blogger. I only sat a couple rolls behind the poncho section, but was at a safe distance from the splatter zone. This does not, however, mean you wont be pulled on stage, have the actors walking over your head, or prevent you from ending up in a giant wad of toilet paper. 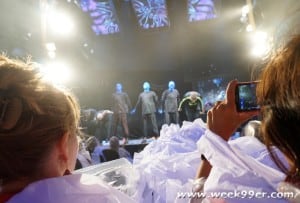 The Blue Man Group shows are all highly interactive. Two audience members were pulled on stage to be part of the show, and others were included from their seats. The Astor Place Theater has a balcony section, and the actors climbed up scaffolding to reach those guests and include them. The show does include strobe lights, flashing and loud music so it wouldn’t be good for people with sensitivities to any of those things. But over all it is a lot of fun. The only thing I couldn’t shake was the feeling that I would hate to be the clean up person!

You can check the Blue Man Group out at the Astor Place Theater in New York, as well as around the nation at other locations!

Get Your Tickets for Secret Sips at HUSH Haunted Attractions

All of the Movie and Series Announced at D23 This Year