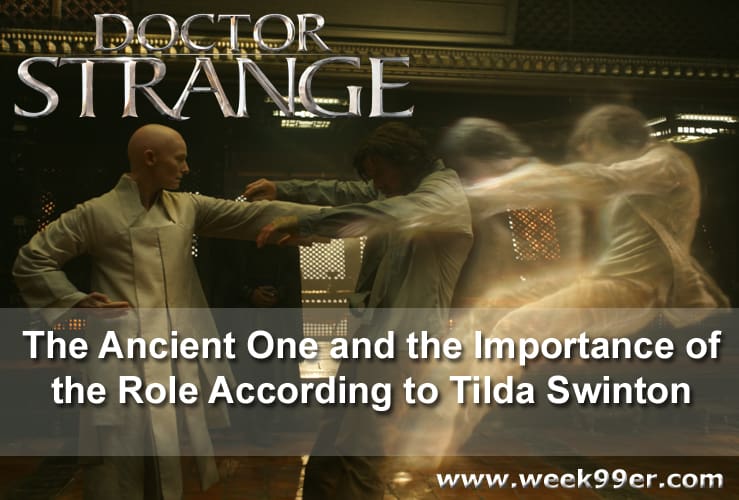 Many fans of the Doctor Strange comic books are a bit thrown off that the character of the Ancient One has been changed quite drastically. Instead of having an actor play the character as drawn, the role of the Ancient One was given to Tilda Swinton – pretty much the opposite of what fans would expect. But Swinton embodies the role and brings it to the screen beautifully with a power and strength no other actor could have brought to the role. We sat down with Tilda and asked her about her role and what she thought was the most important part of her role as the Ancient One.

Beside embodying power, the Ancient One has a role that is pretty demanding. Swinton explains the hardest part of playing the role. “The only real struggle was casting spells – learning all these amazing things with fingers, and then remembering what to say at the same time.  They would say, ‘So you have to put your hands there, not there because the light is going to go there.”

In the comics The Ancient One is played by an Asian male, so casting Tilda Swinton may seem like an odd choice by some fans. But she answered why she thought the changes were made for the film. ”

Well you know in the comic strip it was an Asian man, in fact, a very ancient Tibetan man living on the top of a mountain.  The film script that I was given wasn’t an Asian man, so I wasn’t asked to play an Asian man. I was asked to play an ancient Celtic person.  If I’d been asked to play an Asian man I would’ve shown them Benedict Wong. Kevin and Scott were very, very clear about the reasons they wanted to shake up the stereotype.  They felt that there were couple of kind of gnarly, racial stereotypes around the two big Asian characters in the film, one was Benedict Wong’s character; he was a sort of servant.  And the other was the Ancient One, who was a kind of old, wise Fu Manchu character.  Scott wanted to make it a woman, which thank you, yes, the male overlord falls over….

“I think was a really, really cool move, you know, to put a woman in the Marvel universe who’s not twenty-one and in a bikini. Although we love the girls in bikinis, but it’s really important, I think, the idea of a sorceress supreme being a woman.”

Besides being enigmatic, the Ancient One’s role is actually physically demanding. Swinton explains what was the most difficult part doing the role. “The fighting is fantastic fun, really good fun, difficult and interesting in fun ways.  But yeah – tough.  You know, lots of looping about, and I set myself the task that the Ancient One would be completely serene through all the fighting.  That was something. I would challenging anybody to do this – to do these moves, like, without going noises like a nine-year-old boy. You know, because we all do— we’ve all done that when we were little. That was quite hard and not making faces.”

One thing you will notice instantly about the Ancient One, she’s bald. This was actually a personal choice by Swinton when she took on the role. “It was my suggestion and we had this great moment after several months of playing with options, all sorts of weird wig ideas, all sorts of long lobes. We went ‘round the houses with it but eventually, it felt like less was more and I loved it.  I thought it looked really, really ancient, but also kind of modern and rad and it was a nice feeling, as well.”

Doctor Strange is Swinton’s first Marvel film, we wondered what it was like being on set. “We were sooo happy!  I don’t know about anybody else, in Marvel movies, but for me, it was like being asked to join the circus.  We all joined the circus and we were all given these incredible costumes and everybody in the Marvel universe that I’ve met so far is so psyched to be a part of it, even though there are some people who have been there for years. You know, technicians or people who have lit all these films for years, or Alex Byrne who does the costumes. She’s done like seven Marvel films, nobody’s jaded, everybody’s psyched,  it’s a playground!  The cast, we were all so happy to know each other.  We’re so happy to see each other here!  Benedict and I were in China just now, but today we’re all meeting, our other cast members.  We’re so happy.”

Seeing yourself on the screen can be surreal for many actors, and at the time we interviewed Swinton she was one of only a couple of the cast who had seen the film. We wondered what her take on it was. “I was really, really happy. I mean, maybe it’s weird for all of us, you know, if you see yourself on a home movie, you sort of go—it’s like when someone’s fuzzed out in a police video, you sort of see everybody else except yourself for a bit.  But with this one, I don’t know whether it’s the way in which it’s in this heightened universe, and we all look like Marvel characters.  We don’t really look like ourselves.  There’s something very smooth about everything, and that’s to do with the way it’s lit, and the way it’s designed.  And it’s cut like a comic strip.  So it’s—yeah, it’s quite an experience, it was better than I’d hoped.”

Every film can be a learning experience for the cast, and in this one Swinton shared her take away. “I loved all the action. There was something about it, we were all very physical while we were working, and we would kind of, you know, jump over to a B stage and do some physical stunts, and then we’d come back and do some quite Zen scene. I had a reminder of something I should’ve learned earlier which is that it’s really important to do the two. You know, I nice, physical kind of energetic life, alongside some kind of introspection is a really healthy thing.  And I didn’t get sick throughout the shoot, and we all always get sick when we’re shooting, and I didn’t get sick. I think that’s something to do with that.  So that’s quite a dull answer but that was true – I did learn that.

“But then, as I remembered and was reminded of how lazy I am.  And how difficult I find learning lines is. I tried something with the Ancient One which was quite tricky, which was I tried to actually be in a kind of state of mindfulness when I was speaking, um, which meant that I didn’t really learn my lines very well. I don’t think I’ll do that again.  That was quite hairy.  I just was reminded again how good it is to be happy when you work.”

The Ancient One is multi-layered and faceted, but Swinton summed her character up in one word “Perspective”.

Unlike several of the other cast members, Tilda Swinton didn’t have to audition for her role. “I was working with the Coen Brothers and I was told that Scott Derrickson wanted to meet me and I didn’t know why.  I’d met him in the past and I didn’t know why he wanted to meet me particularly. We had tea and he told me he was going to do this film, and he told me that he had written this part for me. 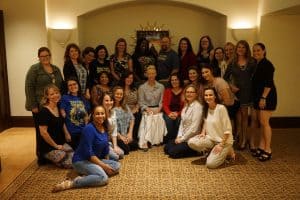 He basically kind of emotionally blackmailed me and said, “If you don’t do it, I’ll have to rewrite it”. I was flattered and honored and intrigued. Then of course I read it and I felt really good about it, I was very lucky.He presented it to me like that.  The film that he spoke about there at that tea table, I remember, was incredible. He said, ‘This is going to be a film, a big, tent pole Marvel film about creation, and not about destruction.’  And I think that’s what he’s done!”

“I mean, that’s what’s so moving, I think, about the film is that Doctor Strange, is taught to—to wield is a power for good.  It’s really new.  I mean, I know that all Marvel superheroes eventually work for good, but there’s a lot of city-flattening that goes on.  But we actually put a city together again.  When he described that to me, I remember thinking, ‘Oh wow I can’t wait to see this film, let alone be in it.’  I was in at that point.” 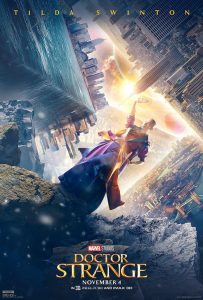