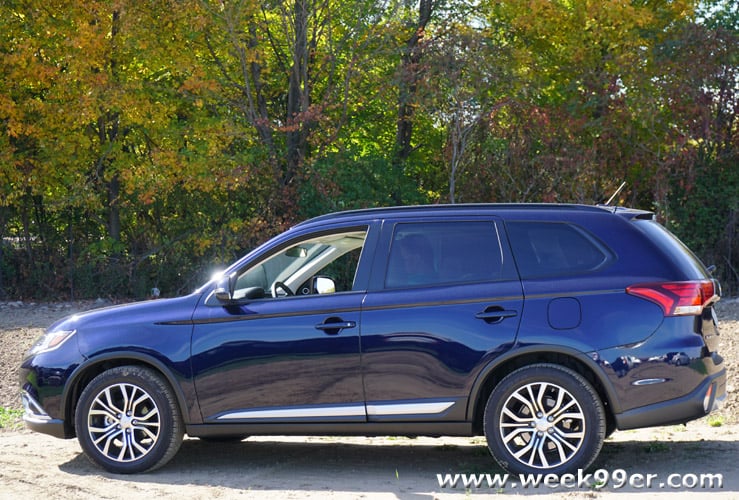 When the all new 2016 Mitsubishi Outlander was dropped off last week for us to review, the first thought I had was the car looked more streamlined and sleek. The last three year’s models were curvy but the 2016 Outlander seemed softer and stretched out just a bit more. A sleek appearance is only the beginning of the updates in the all new model, but of course there are a lot of things that are becoming standard on all of Mitsubishi’s newer model vehicles. 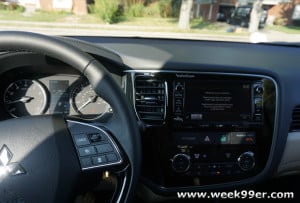 The steering column and dash is about what you can expect in most Mitsubishi cars. The steering wheel allows you take and place calls hands free, control the radio and set cruise control. You can also control the driving mode the vehicle is in from eco, snow, and all wheel drive. the central console control offers climate control, radio, satellite radio, GPS and phone pairing options. You can also pop the screen out to insert CDs or SD cards. 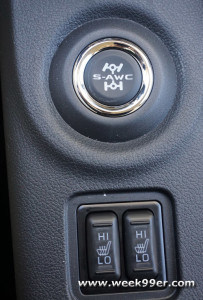 In your central console between the seats are the heated seat options as well as a button to change to eco or four wheel drive. The large arm rest/storage container does stick out over the seat heat control options which makes it a bit hard to reach while driving, and the heat setting doesn’t turn off when you turn off the vehicle. Remember to turn this off between rides, or you may get a warm tush the next ride around. Despite the odd placement of the buttons, the center arm rest does provide storage inside as well as USB charging/docking stations. 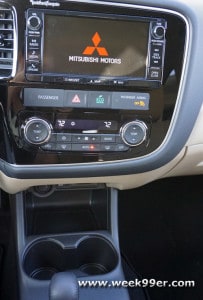 Another place on the interior that was a bit odd was the cup holders – that are seriously right under the control panel. Not only does this prohibit you from putting larger (or taller) drinks in the cup holders, I found it meant that I had to lean far forward to get my drink while driving. While it’s not a make or break item for the car – this would not be ideal for tall drivers or passengers, and is a major negative for me.

There was only one other that I want to note that was a negative on the 2016 Outlander for me – LDW or Lane Detection Warning. Not that the car had it, it’s a great feature if you like it, however the sensitivity was up on the new car. I opted to turn off the LDW, but since the car didn’t remember I did it each time I turned it on, I would have to turn it off again. I’m sure there is a setting where you can fix this, but for me this was an annoying thing to have to remember on each ride. 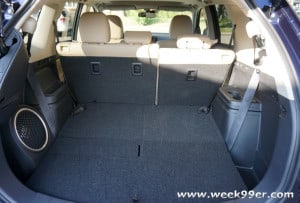 Now that the bad is out of the way, let’s talk about a couple items I love about the all new Outlander – storage space! Just look at the back of this beauty! There is a third row tucked in there, so you could comfortably seat 6 passengers if you needed or wanted to. But when you don’t need the space you have more than a traditional trunk space available for hauling around. Also in the back you find a large sub woofer for the Rockford Fosgate stereo system that’s in the Outlander. 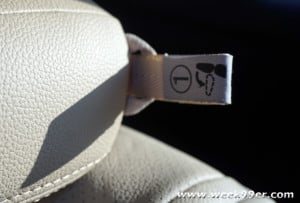 If you need storage putting the seats down in the back is as easy as 1, 2.. nope no 3 required! This is probably one of my favorite things about the car. On the head rests of both second row seats are numbered tabs. Pull the one and the headrests drop flat. 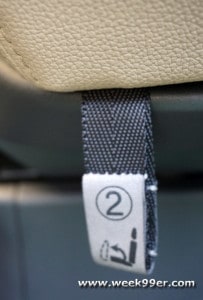 Step 2 is just as easy – on the seat cushion, just pull the tab and the seat will go flat up against the seat in front of it.  It pops up effortlessly and you could easily do it with one hand and without a lot of force. 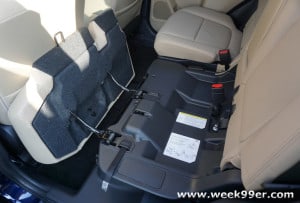 Once you pull the second tab and the seat moves it pops up allowing for you to have space to push the seat back down. This means you can lay the seat down completely flat and have one level of storage space in the back. You wont need to account for that small angle that most car seats force you to deal with when the seat back is down. And placing the seat back in position is also easy to do and can be done with one hand. It will snap back into place without little effort or force. 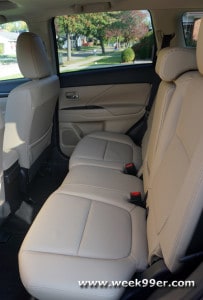 The 2016 Outlander does seat 6 comfortably and is loaded with safety features to keep your family safe and comfortable inside the interior. Our time with the Outlander was spent mostly in town running errands and included a trip up to an apple orchard to pick fresh apples. One thing we did notice was the vehicle could have used a tad more leg space for taller drivers and passengers in the front row, but overall the ride was comfortable.

Despite some odd placements in buttons, cup holders and even the driver’s door arm rest (which was a tad low). The Outlander was a nice ride, and rocked at gas mileage. Our week full of trips out and about didn’t even run through 3/4th the tank even though we put over 300 miles on the vehicle. And we never ran out of space on any of our adventures. I appreciate the effortless button actions in the SUV including the one button open and close of the hatch. It feels like Mitsubishi is making the vehicle very user friendly and with a family in mind. 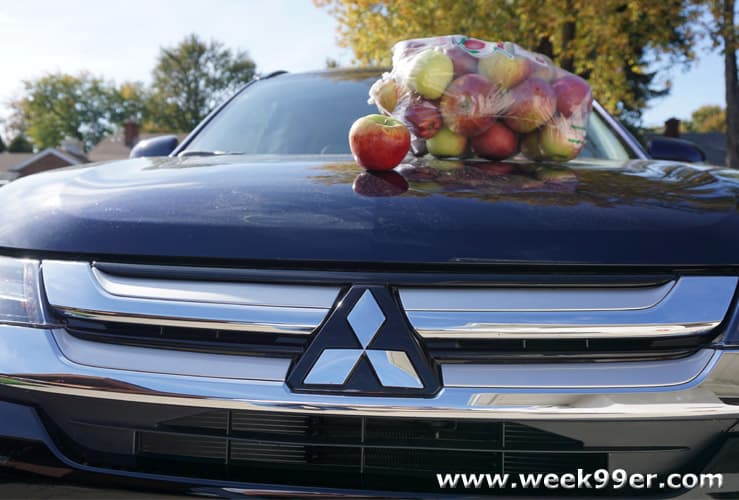 John Bronco Brings an Satirical History to the Iconic Truck