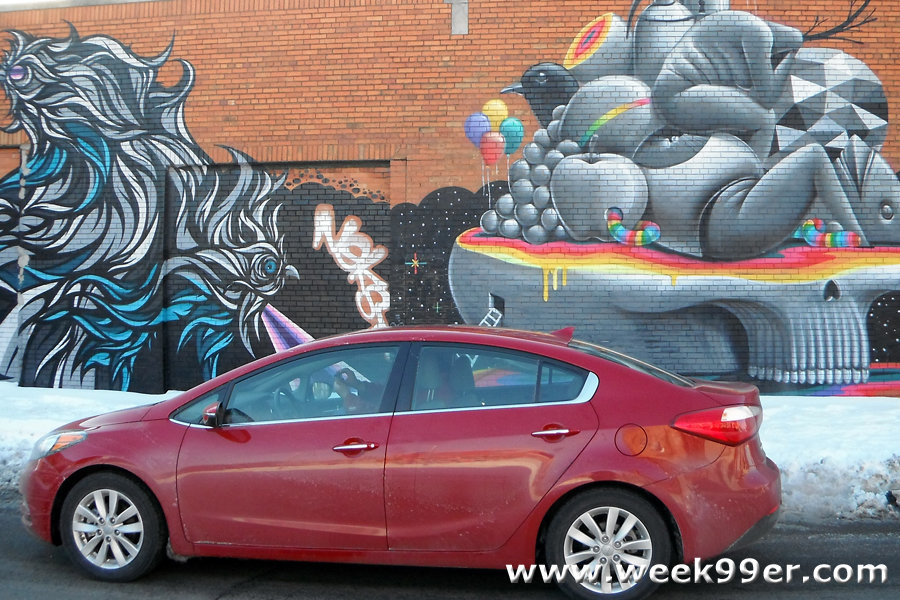 I had just gotten use to driving my new car around when Kia dropped off their new 2014 Kia Forte for me to test out. It actually took me a couple days to get use to driving a sedan again instead of an SUV, and such a small car. But my week off between terms was full of local errands and running around, the Forte quickly proved to not only be up for the job but at times easier to get around in. 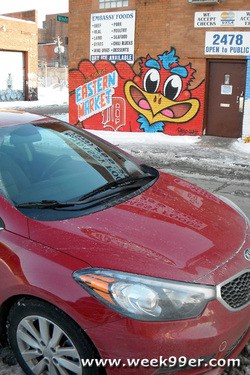 The 2014 Kia Forte is small on size, it would easily qualify in the compact category. But when I sat inside I was instantly surprised at the amount of space it had. I didn’t have to put the seat all the way back so I could drive the car, I actually found myself moving up to get to a more comfortable driving position. Despite that, I was afraid that my boyfriend wouldn’t have enough leg room in the car. Other than having to duck to get in a low vehicle, my 6′-6″ boyfriend easily fit in the car and even had extra space. He said he would even be able to move forward if someone were behind him and needed more space. That was not something I expected in a car that looked so small on the outside! 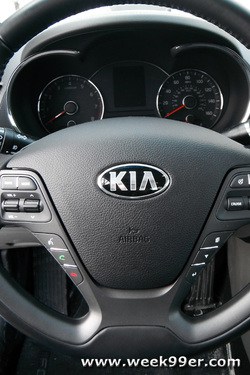 The Forte didn’t come with every feature or fully loaded – but in reality, that’s more the price point I’d be getting a car in. With that being said, it still had hands free calling, UVO for navigation, a USB connection and iPod dock in the car.

The steering wheel was still completely filled with buttons so the driver could control anything and everything without moving their hands from the steering wheel. The buttons are well laid out, and I didn’t find myself accidentally hitting any as I drove. Instead, it was easy to control the music, my calls and even cruise control without having to really look down to see what button I was hitting. I really appreciate not having buttons on the bottom where I generally rest my hands and am prone to call someone I didn’t mean to. 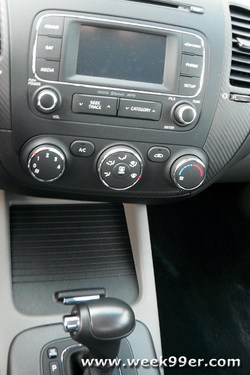 Since the Forte was in the middle of the feature options the center council wasn’t as full of options. Basic controls for heating, cooling and the radio could be found. It did still feature a touch screen radio option that paired with the UVO function in the car.

One feature that I really liked with the small privacy door right about the gear shift. Inside you will find the USB jack and the iPod dock, but also a large cubby space that you can keep your phone, a wallet or anything else while you’re driving. If it’s not something you want to take when you get out of the car, you can just pull the door down and hide it. It’s a very low tech feature but one I enjoyed. Additional storage of course can be found in the glove compartment and in the counsel between the front two seats. 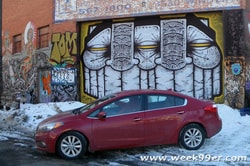 Thankfully, the week I had the Kia Forte the weather was nice. We did get a little more snow, and of course were below freezing most days. But it wasn’t enough to keep us inside. I zipped around town to the grocery store, up to work to pick up some books for the new term and even a trip to Eastern Market. 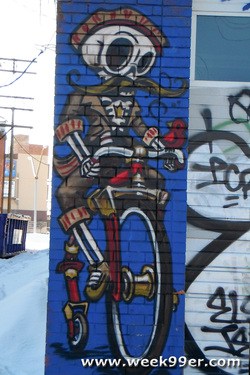 We took some time in the car to drive around some of Detroit and check out some of the new graffiti art done by the Weird last summer. The German Artists covered many vacant buildings, corners and pretty much anywhere they could find with full scale artwork. From whimsical to political or just images to make a statement the artwork was interesting to see. Granted most we saw through the windows of the Forte since it was only 16 degrees outside. The cold worked to our advantage as we explored the market district and the local and fantastic artwork throughout the area, we didn’t have to worry about any of the fresh produce we had filled our trunk with. 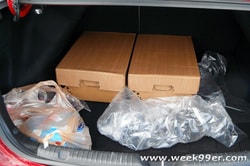 One of the biggest surprises I found in the 2014 Kia Forte was the amount of space overall. Outside the car looks tiny, and even slides into parking spots with plenty of space left over. But inside you could easily seat 4 adults comfortably, as well as other items. Even the trunk space surprised me – not only could I fill it with two large 40 lb boxes of meat, but with several bags of groceries. There was so much space that it didn’t look like I had purchased anything at all. This is great for small families who have to haul off of the shopping plus strollers and other bags. There is room for everything inside!

The 2014 Kia Forte is small on size, and even without all of the bells and whistles is a great ride and a great car. It has a combined fuel economy of 29 MPH and starts at $15,900. 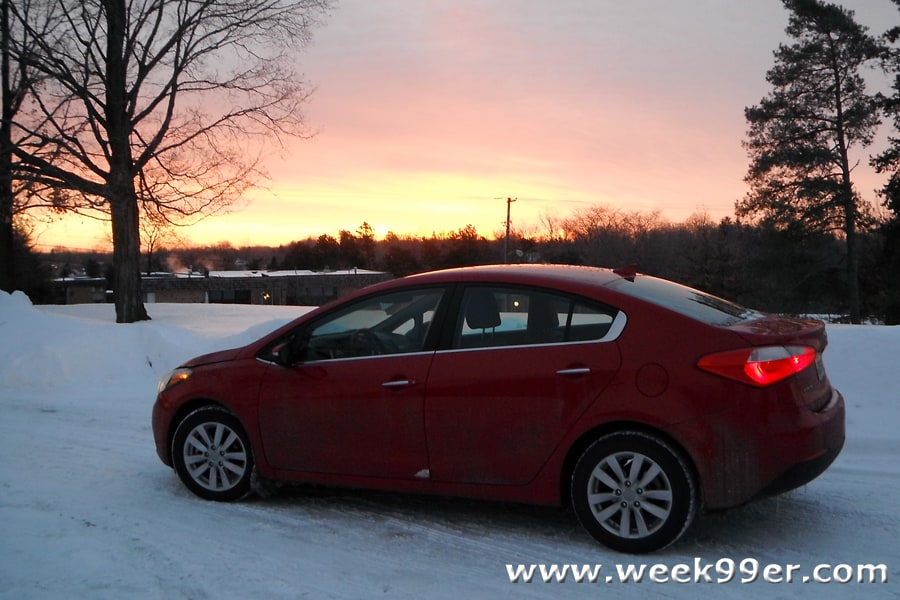