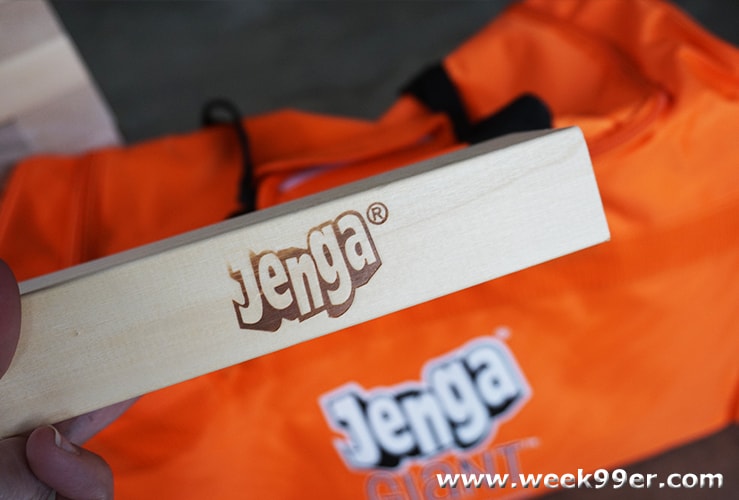 Family game night is going to another level with Jenga Giant, the over-sized game that is really going to put your stacking skills to the test. Joining the leagues of other oversized game Jenga Giant is actually the only authentic wooden version of Jenga that stacks over five feet tall while you’re playing. 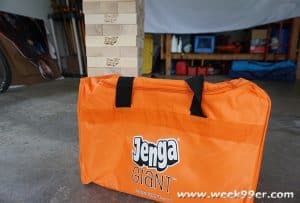 We were sent a Jenga Giant set to play with, and the first thing I didn’t expect was how heavy it is. Yes, it has 54 hardwood pieces and a carrying bag included, and the size alone means it’s going to have some bulk to it. Weighing in around 20 lbs, this set is massive and is actually suppose to be for ages 12 and up – mostly due to how tall the set gets, and it does fall with quite some force when you pull the wrong block out. 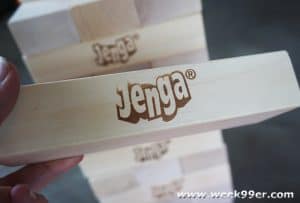 Jenga is a game of strategy and one that can change in a second depending on what brick is pulled out. But Jenga Giant makes it a bit harder. You have to circle the giant tower to find just the right block to pull out and hope that you don’t make the giant tower fall with the wooden “clack” sound it makes as it goes down. One thing we loved about the game was it came with it’s own bag to carry it with us wherever we go. The bag is reinforced to not only fit the whole game, but also the handles wont break off as you carry it. That means we can take it to large family parties, the beach or wherever we may want to play the game. It also helps keep it neat inside the game closet.

We had a lot of fun with Jenga Giant, and the change in size – a whopping 14 times larger than the regular game makes it a different game in general. It forces you to change how you play the game, your strategy and with the increase in height you’ll have an increase in laughter and fun as well.