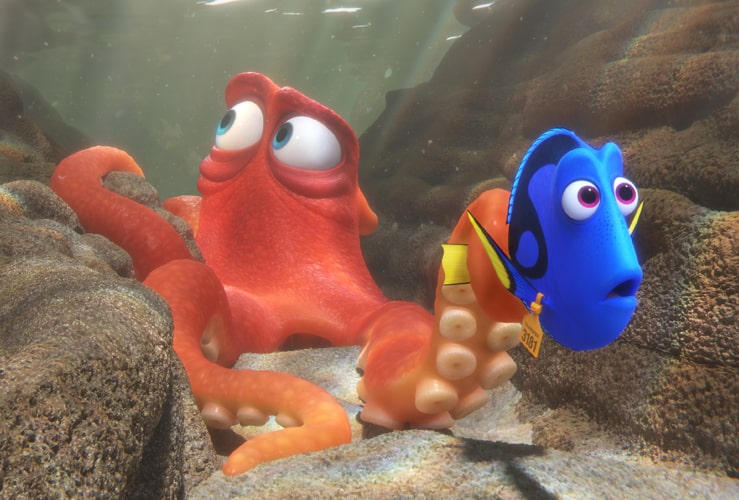 I can’t believe it’s been 13 years since Finding Nemo was released. That’s probably because we still watch it a lot in our home. It won countless awards and was named one of the top 10 animated films ever made – so let’s just say that the bar was set high for Finding Dory. How can you top a movie like Finding Nemo? When we went to the advanced screening earlier this week, we were excited about the movie and how they were going to integrate the original story with the new movie.

Finding Dory switches the story’s focus to Dory’s quest to find her family and about who she is. The movie starts with her as a young Blue Tang and introduces her parents. The animation has only improved from when Finding Nemo was released, but the movie still has the same feel as the original. The beginning of the movie does wrap Dory’s story into how she meets Marlin and Nemo and takes you full circle with her parents.

The movie takes the main characters to a Sea Life Rehabilitation center in Morro Bay, California (a city dear to my heart). The Sea Life Center is actually based on the one in Monterrey Bay Aquarium, where you can see many of the sea life featured in the film. The characters are all at one point end up at the Sea Life Center on their quest to not only find Dory, but to find her family. The movie introduces new characters that you will soon fall in love with and be glad to to add to the collection. You’ll fall in love with Destiny, Bailey, Hank and all of the other new characters. With new additions to the voice acting cast like Ty Burell, Ed O’Neal and Diane Keaton, the movie cast only gets stronger. I honestly don’t know they could have cast Hank (the septopod) better than with Ed O’Neal – a gruff character with a tender heart you’re going to fall in love with.

Did Finding Dory stand up to the original? For a sequel it’s a great addition, but Finding Nemo still holds a strong hold on our hearts. The new movie is amazing, it made me laugh and cry and is definitely one I will add to our collection. Definitely check it out in theaters, but you’ll be fine seeing it without 3D. We loved Finding Dory, it will just take a bit of time for it to push Nemo out of the first place spot it holds!

Disney-Pixar’s “Finding Dory” reunites everyone’s favorite forgetful blue tang, Dory, with her friends Nemo and Marlin on a search for answers about her past. What can she remember? Who are her parents? And where did she learn to speak Whale?

Disney-Pixar’s “Finding Dory” reunites everyone’s favorite forgetful blue tang, Dory, with her friends Nemo and Marlin on a search for answers about her past.