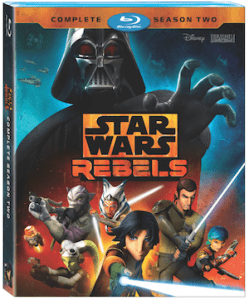 It’s time to head back to space and rejoin the fight of the Rebels and the Empire. That’s right, Star Wars Rebels second season is coming to Blu-Ray and DVD. We’re excited to continue the journey battling evil with some of our favorite characters.

There’s a huge amount of Star Wars mania going on, and the Star Wars Rebels series helps feed that need we have to catch up with what’s going on in the universe. It’s always a classic good vs. evil fight, but the series brings an excitement of space and exploration and blends well with the Sci-Fi classic movies we already love.

Available August 30, this thrilling continuation of the Star Wars Rebels saga depicts the continued efforts of the crew of the starship Ghost to defeat the evil Empire.

Amid growing Imperial oppression on Lothal, the rebels are forced to seek out new allies throughout the galaxy and additional resources to sustain their fight against the Empire. With the help of Ahsoka Tano, the crew of the Ghost bands together with a secret rebel cell and ex-soldiers from the Clone Wars to join a fledgling alliance determined to restore peace and freedom to the galaxy.

The Blu-Ray and DVD Release of Star Wars Rebels: Season 2 has all 22 episodes and is rated TVY7.

The second season of Star Wars Rebels will be released on August 30th, but you can preorder your copy now to make sure you can watch it all as soon as it’s released!