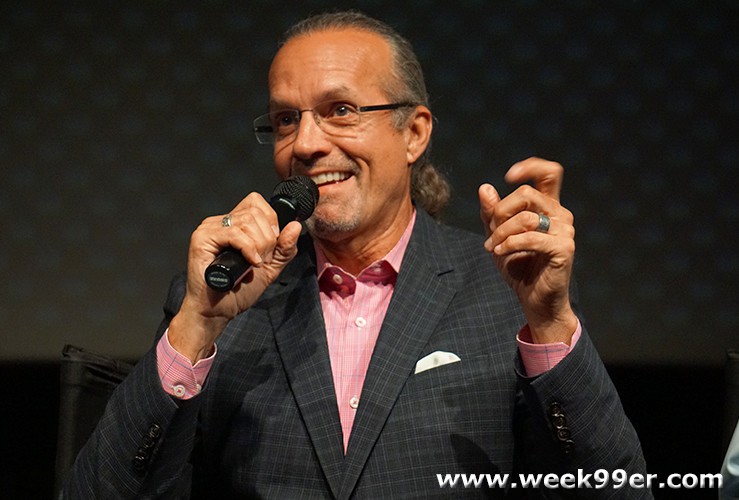 NASCAR is a sport that has a huge following and love for the sport. That is probably why the influence on the Cars movies is so large and people are drawn to the movie series. In Cars 3, Kyle Petty makes his voice over appearance as Cal Weathers and brings a bit of his family NASCAR history to the screen. We were able to sit down with Kyle while in Charlotte last month to find out more about his part and what the franchise means to him and the sport.

Can you tell us a bit about the recording process?

You know what, it was totally different than anything I had every done. I’m very fortunate that in the business we’re in, that you go in and you do radio ads and car shows in a recording booth. I’ve been around the music industry a lot so I understand the recording process. But this was a visual recording process. And for guys that ride around in circles, it’s not something you’re use to. Brian would try to explain the scene, and try to read you into it. And you had to picture your line and read you out of it. You had to have a full spectrum of emotion. It’s funny because my part was the one they picked on a lot. He was the guy they pointed at and poked at a lot, which is pretty true to life. It was funny because you had hit the tone and be where it was at. It was a lot harder than I ever dreamed. And talking to some of the other guys who did the same, it was really hard. Maybe that’s why a lot of us only had one line – because that’s all we could get out of the thousands they sent us. After you gain a totally different respect for actors and people that do voice. It is not a bodily thing, it’s not let me tell a joke and its a physical joke – it’s all voice.

Were you able to improv at all?

It wouldn’t have been a children’s movie if I had improved. So let me just say that. A little bit, yah, that was the good part. Even, a lot of times they’d send us off into an improv and bring us back to the core of what he was trying to get us to say. And it was pretty good. Brian would let you go off but would bring you back to where he needed you to be.

Is it cool to have the bragging rights with you family that you’re in a Pixar movie?

I tell fans when they walk up. Hey you may want to check this out. It really is. I’m going to say this, when they did the first one and you thought that’s good with Mr. The King and everything. But after my parents sat down with John to dinner and he said he had to write a part for my mom that was amazing. Richard Petty always got anything, and she got to do this for the grandkids. So to come back for this one and have a part in it. My father has a museum not far from here, and the car she represented in the first movie – the blue station wagon is in the museum. It’s pretty cool, when kids come in, they recognize it.

So what was it like seeing your character with your voice on the screen for the first time?

I always think it’s strange when you hear your voice anyhow. I think in your head your voice sounds totally different. To watch the movie and all of sudden it’s coming up and you’re like “he’s going to speak” and you hear it – it’s a little embarrassing.  You’re a little embarrassed to begin with, then you think “that’s pretty cool” The way it happens on the screen and interacts is pretty amazing. I think my sisters and nieces and nephews were as excited as I am.

Are you hoping for a Cars 4?

There’s a southern saying “Pigs get fat and hogs get slaughtered”. I’m good where I am. If anything else, this was fine. To close that loop with my family is pretty sample.

Did you have a lot of pressure being a racer being in this film?

Here’s when the pressure came – we did some lines initially here in Charlotte, at a studio here. They rented a sound studio we all went to. Then you get the pressure call that’s like “Come to Pixar – you have to come to California”. Did I screw up that bad? Then you walk in, and it is such an amazing place. So much different than your mind could imagine. I had no preconceived notion on how they do their business. We get that with race shops. People come in and go “oh my gosh, look how clean this place is” Yeah, we work on race cars not dirty road cars – they’re race cars. And people’s perceptions of what race cars are and how it works. Going out there and having Brian step through and tell me exactly what he wants and how he wanted it – it was a lot of pressure. Once you see the animation and see some of it, and they take you on a tour and see where they work. It’s like “ok, you’ve got it”

Coming from a family in racing – is there anything else you wanted to do?

The sports at a different place than when I came along. Where I grew up, everyone was a dairy farmers, chicken farmers, tobacco farmers. It was the rural south. And that’s what everybody did, except us – we had a garage. We worked on cars and worked on tractors and things for farmers and we raced. I tell people, they raised cows we raised race cars. That’s what we all did. I ended up being a third generation driver, then my son did, who was killed in 2000 was a 4th generation. I can take you to our next store neighbors and they’re a 6th generation farm. And there’s 5th generation farms that still do the same thing. It’s the same with Dale Jr., you can say it’s the south and that it’s a little slower and a little bit backwards but it’s not. It’s what we do, we want to be like our dads. We want to grow up and be like our dads and follow those footsteps. Our sport, just like is portrayed in these films, is a family sport. It’s a really small group of people when you get down to it. There are 40 drivers, there 7 or 8 owners, there are 1000 or so crew workers. That’s our whole world, that’s everybody at the cup level. And you go the race track and your stuff doesn’t work, then you borrow it from somebody else. And they’ll loan you their gears and part and pieces, and it’s not a big deal. That’s the way it’s always been, and that’s the way you grow up. And that’s your community, we just never leave your community.

Athletes have a hard time retiring, when did you know it was the right time?

That’s a complicated question in some ways. When I first came along, drivers didn’t retire until their early 50’s. If we go back to Dale Sr. he was 50 or 51 when his accident happened. Even the guys that came along, my contemporaries. Jeff skewed the numbers because he started so early, at 20-21. Where Earnhart Sr didn’t start until 28 or 29. There was an 8 year gap that started to skew that way.

Here’s the thing that I always try to explain, when my son came along I was ready to retire in 99-2000. But after Adam’s accident, I had to keep the business alive and I had to keep driving the race car. I drove for another 7 or 8 years just to drive. Not really to win, just to drive and keep the business alive. I think it’s hard, you talk about other athletes, but it’s hard for drivers.

I think everyone loves their sports, but driving a race car – there’s something different about it. Something strange about it. You know that when you get in that car, you may not come back. That possibility is out there, every single week. This may be the last time you kiss your wife goodbye and hug your kids. It may be the end of it. It is a little dramatic, but that possibility is always there in this sport.

But when you’re a kid, and 6 years old, I’d got to my dad’s race shop I’d dream of being a race car driver. I’d dream about driving a race car, about beating someone. You watch this movie, that’s what they dream about. They don’t dream about a shoe deal, or doing commercials, they don’t dream about doing a voice over in a Pixar movie. They dream about driving a race car, about sitting in the seat and hanging on the steering wheel. About winning the Daytona 500, about winning the championship – whatever it may be. One day you get to a point in life and you have to put that dream in a box and put it on a shelf somewhere. And all the money you made, and all the stuff you get doesn’t make a difference, because nothing fulfills that little piece. So that’s why its so hard sometimes for guys in this sport to stop. It was hard for my dad, it’s been hard for Junior, it’s hard for Jeff and it takes an emotional tole. It feels like you reach in and take a part of your heart, put it in a box and put it on the shelf and you can’t go back to it. you can never go back to it.