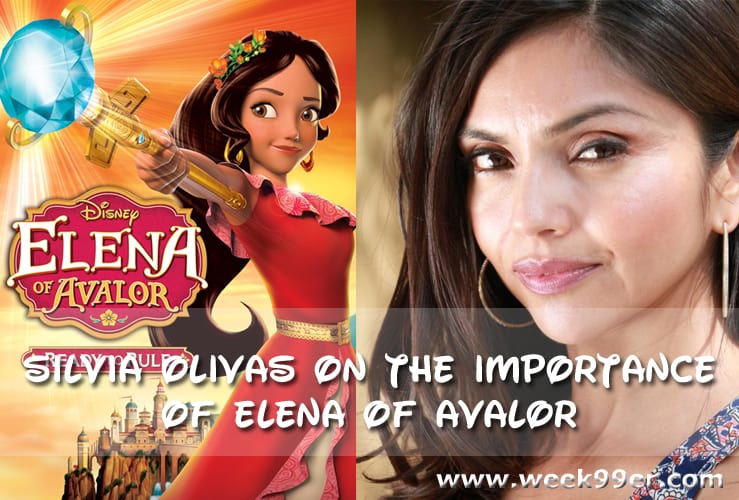 Earlier this year, Disney released it’s first Latina Princess – Elena of Avalor. The crowned princess who is on her journey to be come queen and is learning as she goes. The strong character not only teaches girls leadership skills, but helps expose both boys and girls to different ideas of leadership, family, culture and more. I was able to talk with Silvia Olivas, the writer of Elena of Avalor, and find out what she thinks most important about Elena, the show and Disney’s first Latina Princess.

What is the significance of Elena being the first Latina princess?

When I was a little girl, I always wanted there to be a Latina princess because it said that I mattered, that they saw me. Now that I get to be the head writer of the series and get to craft her story and really evolve her character I really think of the audience. I think about the little girls who have been waiting for her. That get to see that they matter, that there is someone just like them who’s a crowned princess. She’s not precious, she makes mistakes – just like them, but she learns from them.

Was it this desire for a Latina princess that drew you to the project or where there other motivations that interested you in writing for Elena?

When I was first asked to think about coming it, it was just a series overview.It’s just a quick character description and what the show could be about. It was written by Craig Gerber – he created it. And I have to tell you, there was already a heartbeat the moment I read that. I knew I could bring a lot to the show and I jumped on it.

What really struck me is that finally we had Latino characters that were royal, had always been royal and don’t know how it is not to be royal. And they purpose is to serve their kingdom. I also read about Latino characters that were Chancellors, Wizards and Oracles. I’ve been writing for over twenty years and I’ve never had the opportunity to write characters like that, and I knew they were going to draw top talent who probably aren’t offered these roles as well.

Another thing that struck me was it was a court kingdom. Which means, I could already imagine there were going to be different types of people coming through the kingdom and different types of characters. And that writer side of me got super excited about that that.

The big thing was that Elena was crowned princess, not Queen yet. So she will be coming of age while she learning to become queen. Again as a writer that got me super excited. I could tell stories where she’s not perfect, she makes mistakes and she learns from them. I felt like it would be relate-able to the young girls watching.

When you were presented with these characters, were fully developed or what type of research went into their development?

There was a paragraph for each character. When I came on and started developing the series with Craig, I started infusing my own life into the show.

The big example was Elena’s grandparents. It was really important to me that her grandparents were not put to the side, that they had a voice. Luisa is just like my grandmother – she’s spicy, and always has something to say, very active. Francisco is just like my grandfather who plays the guitar. He would serenade my grandmother after dinner and they were obviously in love. I told Craig, Latinos – we listen to our grandparents. We may not always follow, but we listen. Elena listens so much she put hers on her grand council.

You’ll see a lot of my life in the show. Some of the decisions that Elena makes as she’s maneuvering through the series are things I’ve done myself. I was definitely here from the beginning.

Other than you personal reference did you blend other Latino cultures into creating Elena and Avalor?

We have two cultural consultants who read everything from the outline to the production drafts. Aside from that, we have been doing so much research. From the very beginning of every episode we do a ton of research. We pulled from different Latino traditions and cultures. We’re pulling from all types of stories and different parts of Latin America and South America. You’ll see that we have a Navidad Episode. In Latin America we celebrate Christmas different. In Avalor, we have this exact same thing where we show the different types of people in Avalor who celebrate Christmas in a different way. You are going to see a lot of different diversity.

I know it’s different writing a series for TV and short movies. Do you ever see Elena making it to the big screen?

Personally, I would love that. Right now I’m focusing on the series. This is the complete truth – I’m so excited that I get to write so many different stories for her. Because I always say that one 90 minute movie is not enough, I really need to unpack her and I want the audience to get to know her family and friends.

I would love a movie down the line if they ever decide to do one, but right now I’m having so much fun writing the series.

Elena is for a younger audience, is there any sort of message that is woven through the stories you want them to pick up on?

Leadership. Every episode has Elena learning a leadership skill, or building on one she already has. Or sharing that knowledge with someone else. I’m trying to track her character growth. When I get emails from mom’s that are so happy because Elena isn’t trying to find Prince Charming, she’s just trying to be the best leader, best sister, best granddaughter and friend. That makes me happy, the stories are resonating. There are little girls out there that think “I can lead! And I can be a queen one day, and I can learn” and that makes me excited.

I think that’s a trend we’re seeing a lot of Disney Princesses going for. It’s no longer the princess waiting to be saved – We’re seeing this strong feminist figure come out of this antiquated Princess idea.

I have a 9 year old son who watches Elena, although he pretends not to. I hear him listening to episodes in his room. I think it’s important for him to see his mom go to work as a head writer of a series. He sees Elena ruling her kingdom. He’s the next generation of young boys growing up. I think it’s important that boys see that women can be leaders as well.

When we first sat down to write the script it was in 2014. It just aired in the summer. It wasn’t an immediate gratification and we didn’t know if it was working. We have to trust our instincts and make sure that we’re writing material that is going to resonate in two years. That is what I’m doing today – working for something that wont go on the air for two years. It makes you really trust yourself and your stories. It makes sure your stories are as tight as they possibly can be before we send it off to the story board artist.

In live action we’d have table reads and we could tell if something was working. Here, the actors come in one by one and just do their lines. It’s piecing things together. In live action it’s all there at the same time. You have to a really strong vision when you get to that point in the script.

Has there been a scene that you loved that hasn’t made it to the shows?

There is something I wanted to include that hasn’t made it to the show. I wrote the Dia de Los Muertos episode, it’s a very personal one. Our family celebrates Dia de Los Muertos. This was the episode where Elena’s parents were going to come and she’s get to go see them at the cemetery. I wanted them to speak. Her parents have passed away and their spirits come back. The very last scene of that episode I wanted them to say her name. The thought was her looking at them was enough. After it all came together, I have to agree they were right. I really wanted them to say “Elena” to let them know she was there.

About Elena of Avalor: Ready to Rule:

Set in the enchanted fairytale land of Avalor, “Elena of Avalor” tells the story of Elena, a brave and adventurous teenager who has saved her kingdom from an evil sorceress and must now learn to rule as crown princess until she is old enough to be queen. Elena’s journey leads her to understand that her new role requires thoughtfulness, resilience and compassion, the traits of all truly great leaders.

Elena of Avalor: Ready to Rule is available everywhere on DVD. It has a total run time of 88 minutes and is rated TV-Y.