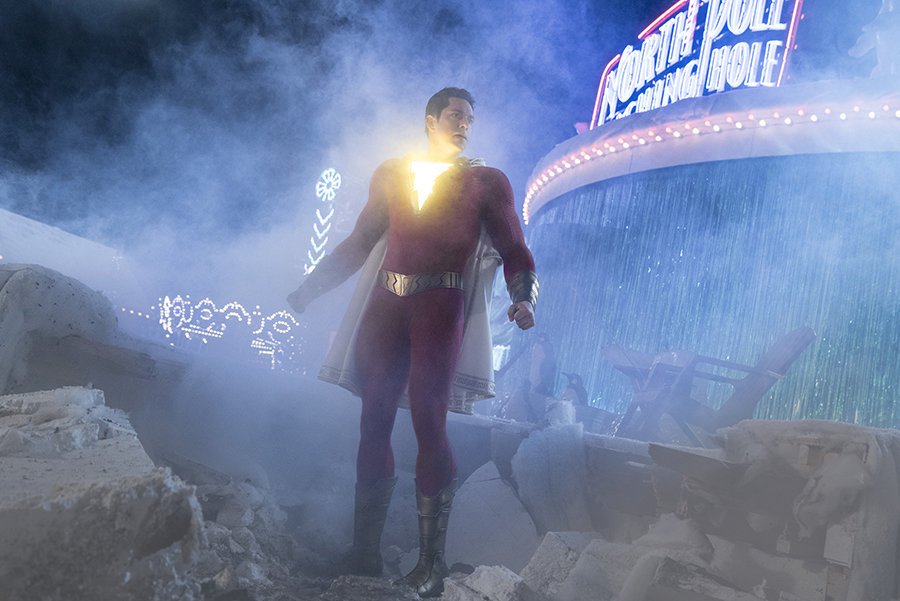 In the battle of comic book hero movies, it seems that DC is coming out hard with their latest release – Shazam. It is the origin story of how Billy Batson comes to be the all powerful hero Shazam and how he not only finds out what that means to him, but why being the super hero is important.

From the trailers, the movie looks light hearted and more of a comedy featuring the well cast Zachary Levi as the Super Hero version of Shazam. The movie does have a lot of laughable moments, but it does include a lot more darker material that is not shown in the trailer and may be problematic to younger viewers.

Shazam is a magical wizard who gives his powers to Batson after the Seven Deadly Sins break out of their stone prisons with the help of Dr. Thaddeus Sivana. Batson becomes the last protector of the world with the powers given to him, but he’s still trying to figure out what it means to be a 14 year old boy, who he really is and to make his way in his new foster home – while still trying to find his birth mother. It’s a lot to handle for anyone, let alone a kid who has issues of his own to work out.

The movie is full of fun moments while Batson figures out how to use his powers as Shazam and the humor that Levi brings to the character. But dealing with topics such as abandonment, the foster struggles of foster children often face, and the darkness that the Seven Deadly Sins brings to the story take the movie to a bit of a darker place than expected. With some cursing, phrases that you may not want younger kids repeating and quite a bit of implied violence (and some played out on screen), you may consider waiting to take kids under ten to this film.

But even with all of that said, Shazam is one of the strongest movies for the DCU that has been released other than Wonder Woman. We’re excited to see how the story plays out for Shazam and his siblings in future movies.

Shazam is in Theaters everywhere on April 5th.

We all have a superhero inside us, it just takes a bit of magic to bring it out. In Billy Batson’s (Asher Angel) case, by shouting out one word—SHAZAM!—this streetwise 14-year-old foster kid can turn into the adult Super Hero Shazam (Zachary Levi), courtesy of an ancient wizard (Djimon Hounsou). Still a kid at heart—inside a ripped, godlike body—Shazam revels in this adult version of himself by doing what any teen would do with superpowers: have fun with them! Can he fly? Does he have X-ray vision? Can he shoot lightning out of his hands? Can he skip his social studies test? Shazam sets out to test the limits of his abilities with the joyful recklessness of a child. But he’ll need to master these powers quickly in order to fight the deadly forces of evil controlled by Dr. Thaddeus Sivana (Mark Strong).  Starring Zachary Levi, Mark Strong, Asher Angel, Jack Dylan Grazer, and Djimon Hounsou, Faithe Herman, Grace Fulton, Ian Chen, Jovan Armand, Marta Milans, Cooper Andrews. Directed by David F. Sandberg. (WARNER BROS.) This film is rated PG-13.