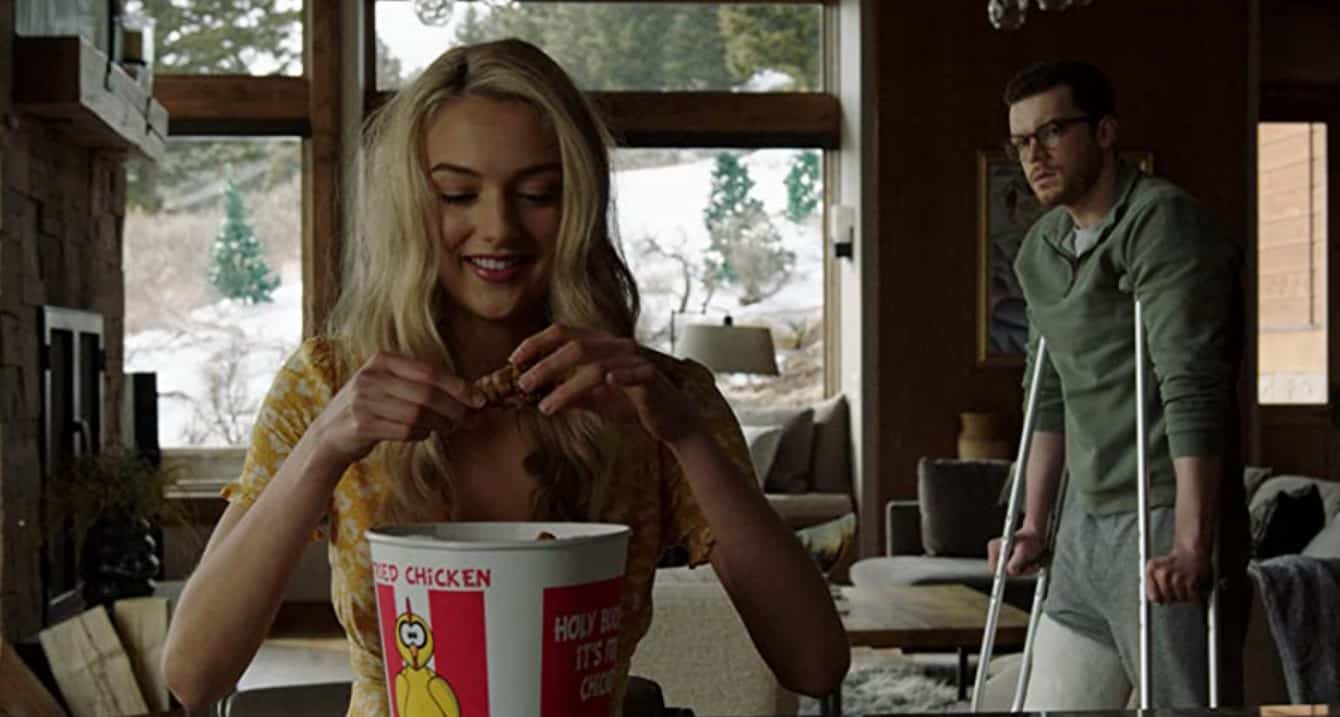 A good thriller will keep you at the edge of your seat and keep you guessing to the end. Shattered, unfortunately, gives you not only all of the information you need at the beginning of the film, but really just gives you the whole story when you watch the trailer. Billed as a femme fatale action thriller similar to Fatale Attraction – the movie doesn’t seem to get that deep and feels like a lacking version of Misery instead.

Shattered follows lonely tech millionaire Chris after he meets beautiful Sky, a woman he’s just getting to know. Chris, a divorcee, and father, made his millions on security software but that doesn’t seem to matter when Sky is in his home. He doesn’t attempt to hide his house codes or how to use his security system when he just meets her. And after a date with Sky, he is attacked and she moves in to help him while he heals. So, of course, Chris just hands over all of the security information to this stranger.

Their whirlwind romance is implied but really takes place over a couple of days or even weeks – but security-minded Chris seems to lose all of his smarts when it comes to a pretty girl and gives her all of the information she needs to take over his home and control his life. Almost immediately after he gets home, Sky flips the script and reveals her actual motive – to fleece him for everything he has with a partner he didn’t know about. Don’t forget how short their actual romance is – when Chris tells Sky later she could have just asked and he would have given her everything since he loved her. Is this just a smart ploy to get out of the situation alive or did they really write him to be that lonely and lovesick that after that short of a time he would give her everything he values?

The movie seems to try to make a statement about the haves and have not in the area and how they view each other. But instead, it comes across as the warped view of Sky and her partner – and the audience isn’t given any context that Chris ever behaved that way or what their motivation was to victimize him other than he had money. Although that may be all the reasoning they need.

As for Sky, Lilly Krug, does play the role well. She goes from a soft and caring girl to one that is fine stabbing someone to death. The reveal of her intentions is done well – and would have been a lot more impactful if it wasn’t in the trailer. She plays a woman who really has nothing to lose and doesn’t care about anything – until the very end when she starts to break a bit. But without a very top-level explanation of her past that is done in about two lines, we have no deeper reason for her behaving this way. It’s almost like they just wanted a beautiful woman wielding a weapon on the screen – and that is exactly what they got. Sky is not well developed and doesn’t seem to have much of a motivation other than what others tell her to do.

Does the movie actually offer more than the trailer shows you? A bit. But it’s just violence, sex, blood, and gore. Unfortunately, the big reveal that would have been shocking is put on full display in the trailer and some of the best parts of the movie. It doesn’t give away everything, but it definitely takes some of the fun out of the film. However, if you want to see a film of a woman torturing a man for his money – this may be the movie for you. Just don’t expect anything too deep or not predictable to happen.

Shattered will be available in Select Theaters and On Demand on January 14th and available on Blu-ray and DVD on February 22.