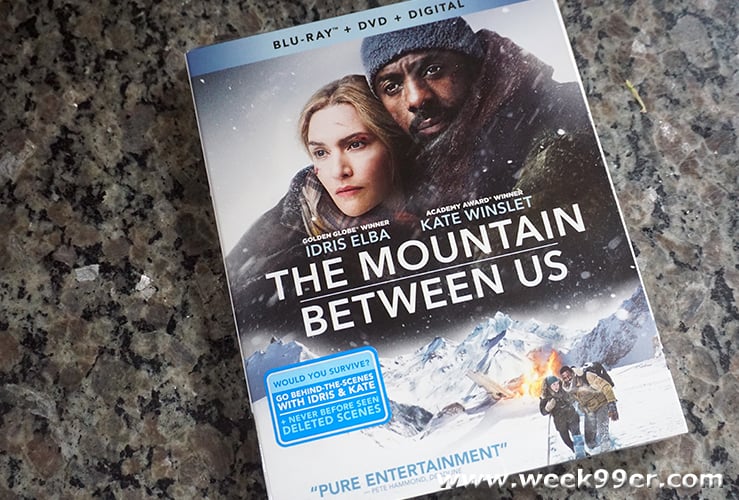 As far as love stories go, when you go to the movies there only seems to be so many stories to be told. No matter what your relationship is, there are problems but The Mountain Between Us puts two people into the hardest situation imaginable – a time of survival. The film will take you through their hardships as they meet in the worst situation and have to survive it, with the help from each other.

From dealing with a plane crash, to finding the strength within, The Mountain Between Us appeals to different audiences. From a love story intertwined through the harsh realities the leading characters have to deal with, the movie is more a melodrama than a drama or a chick flick. It’s overall a good movie night flick, and one to watch over again. Settle in with some popcorn, a movie and see where the human condition can bring the best out of us.

You can get The Mountain Between Us on Blu-Ray, DVD and Digital HD Now.

About The Mountain Between Us:

Described as “pure entertainment” (Pete Hammond, Deadline), the film arrives on Blu-ray™, 4K Ultra HD, DVD and VOD December 26. Based on the book by Charles Martin and starring Academy Award™/Golden Globes® winner Kate Winslet & Golden Globe® winner Idris Elba, this movie is a must-see survival drama during which “you’ll be on the edge of your seat” (Andrew Freund,DishNation). Stranded after a tragic plane crash, two strangers must forge a connection to survive the extreme elements of a remote snow-covered mountain. When they realize help is not coming, they embark on a perilous journey across hundreds of miles of wilderness, pushing one another to endure and discovering strength they never knew possible.

Special features include exclusive deleted scenes, behind-the-scenes featurettes, including, “The Wilds: Survival Stunts,” “Love and Survival: Creating Chemistry” and “Mountain Between Them: Shooting in Isolation.”

THE MOUNTAIN BETWEEN US is directed by Academy Award™ nominee Hany Abu-Asad with Peter Chernin, Dylan Clark, Jenno Topping and David Ready serving as producers.

THE MOUNTAIN BETWEEN US Blu-ray / DVD Special Features Include:

Tags: 20th century fox, movies, reviews, the mountain between us