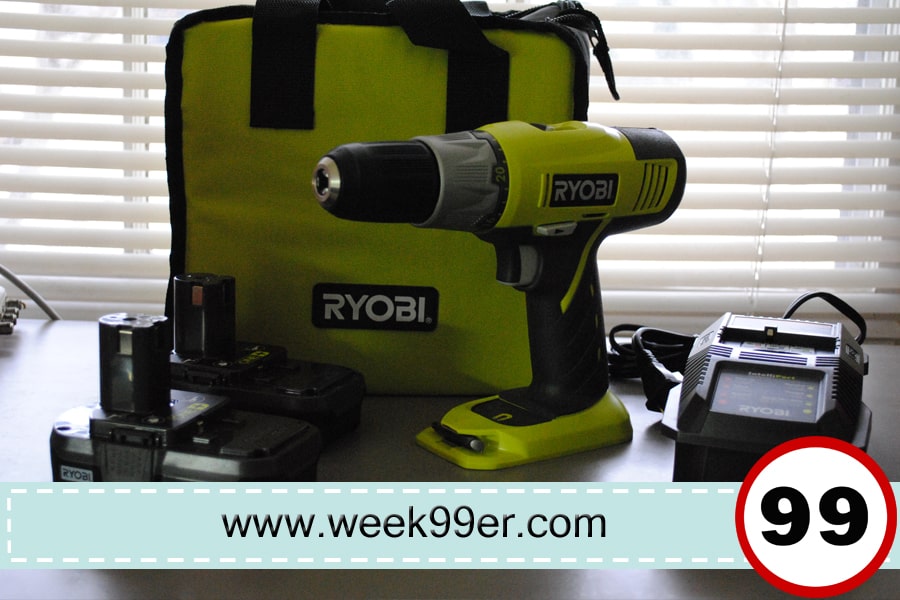 Since I was younger I always have worked with tools. We grew up in a neighborhood with 30 boys and 4 girls, so we learned to use them. As I got older my tool box was always full and I fixed a lot of the issues in my apartments and built my own furniture. I even had to take construction courses as part of my major – so working with tools is nothing new.

Ryobi sent me one of their 18V Lithium-Ion One+ Drill Kits to review – let’s just say it was love at first drill! 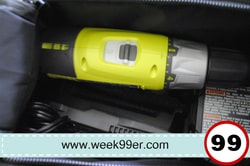 The 18V Lithium Ion Drill Kit comes with everything a home repair person, or a professional will need. It has a the drill with the interchangeable screw driver bit that attaches to the base, two batteries, a smart charger (that wont waste your power once the battery is charged) and one convenient bag that holds it all. Pair the drill with the bit set of your choices and any project will be fixed in no time! 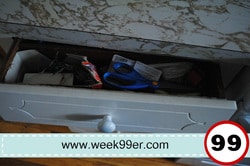 I’ve mentioned before that we live in an old house, it’s over 70 years old now. Some features are original to the house, others have been updated. And while some repairs have been quick and easy – it appears the last owners did many of them wrong and poorly.

One of their poor repairs, that has been driving me nuts is the drawer in the kitchen. Yes, it’s our junk drawer but they somehow screwed up the track system. Used the wrong type of screw and it has been tilted and wonky for years now. 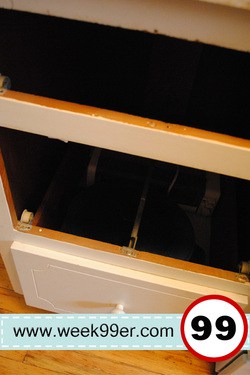 I carefully removed the drawer and scoped out the full problem. Not only had the track fallen somewhere in to the drawers below, but the area the screw was suppose to secure to was completed tore up. The biggest problem I found – they had the wrong sized screw, it didn’t even fit the hole to in the metal track.

Once the drawers were removed it was easy to take the original track put it back where it belonged. I had picked up some new screws and made sure we had the proper fit. I secured it screw in with the Ryobi drill and made sure it was tightly in place. It was a simple project and didn’t take me more than a few minutes. 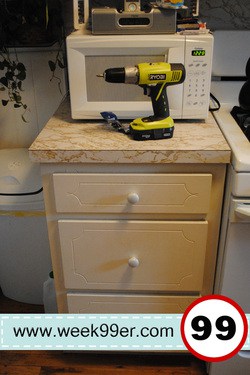 Once the track was fitted in, I slide the drawers back into their place. I think the whole project took me under twenty minutes and I used the original hardware that worked with the drawers – I didn’t even have to retro-fit a new track system.

I have to admit, not only am I excited to have a fully functional drawer again, I’m shocked it was so easy. Had I had to use a hand screw-driver it would have taken me much longer and probably would have been much more frustrating! 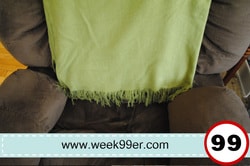 One project I have been trying to take care of -and tried multiple methods is to fix my recliner. Just over a year ago, Jason and I purchased recliners for the living room from a popular furniture store. It was a big investment, and one of our first sets of new furniture together. But within 6 months of getting the chair there was a problem – the left side of the back slid out of place. You can see in the picture that one side is back further than the other. I could slide it back into place and the smallest thing would make it pop back out, like Godiva leaning against it.
Find other Cordless Drill Reviews 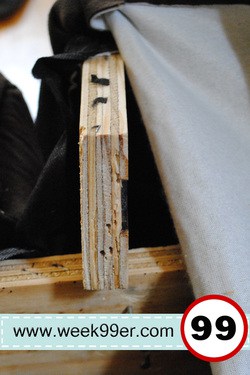 I’ve investigated what the problem was, and it appears that the support board for the back was never properly secured . It appears they took several attempts at nailing it in and missed each time!

When I called the company about warranty options and getting it repaired they told me that it would charge me around $200 just to investigate the problem – not including repair… Now, I’m frugal and that isn’t an option! Instead I went about fixing it myself. All it needed was to be secured right? I went out and picked up a small bag of screws that would lock into the composite board and went home to get to work. 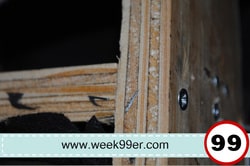 I secured the board in place with three screws along the support beam. This took me a bit longer to get through the composite board that I expected, but overall it took me 10 minutes to secure the board in place. This is something that I would have never been able to do by hand – and especially in the amount of time I did it in! 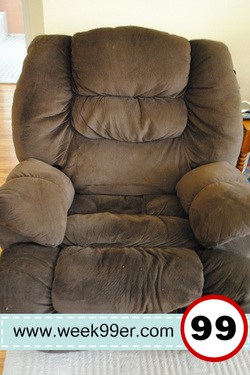 I sat the chair back up and tested the back – not only did it stay in place but it has since I fixed it. It was a cheap fix and it is more secure than when we picked it up at the warehouse!

The Ryobi 18V Lithium Drill has a lot of power behind it and it doesn’t have a large amount of kick back while you’re working. It powered through layers of composite board and repaired problems in our house both large and small. It is definitely a go-to tool for me when doing in home repairs, and I love how easy and quick each project is for me!

You can purchase the Ryobi 18V Lithium Drill Kit at your local Home Depot store or on Amazon. It is a great addition to your tool kit for repairs around the house or your upcoming home improvement project.