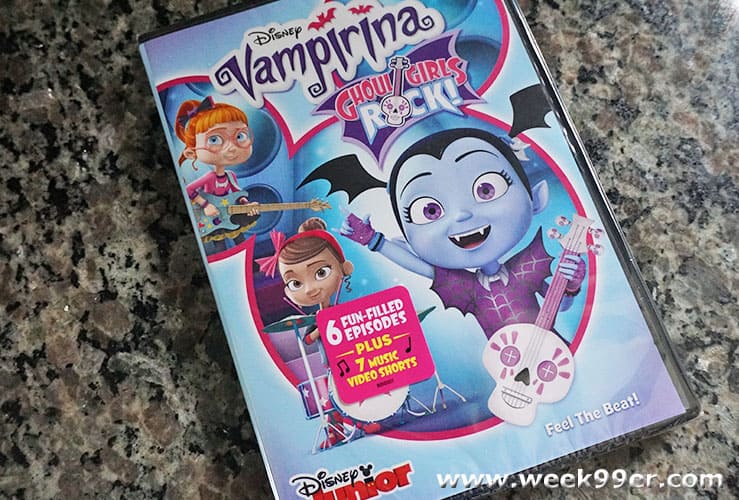 Grab your favorite Ghoul and get ready to rock out with Vampirina and her friends. Disney Junior has just released Vampirina Ghoul Girls Rock! on DVD and it will get your kids up dancing along with the music. The girls our on an adventure as they travel to Transylvania for a talent competition and have to work together to try make it through some challenges they didn’t know they would have to deal with.

With a little bit of a creepy fun side, Vampirina is a going to become one of your favorite new characters in the Disney Junior crew! Like the other shows they release, the episodes are family friendly and will teach your kids about working together with their friends. The fun animation is a mix of characters that pop off the screen and a flattened background which gives it a fun contrast. Add in the music that you’re going to love as much of your kids, it’s going to be one of your favorite shows to watch with them all year round.

Vampirina Ghoul Girls Rock is now available on DVD, is rated TV-Y/G and has a total run time of 132 minutes.

Follow Vampirina and her two best friends, Poppy and Bridget, as they take the stage and start their very own band: the Ghoul Girls!  Cheer them on as they travel to Transylvania for their first-ever talent competition and go on many more awesome adventures! Amped with six music-filled episodes, plus seven bonus animated shorts, Vampirina: Ghoul Girls Rock! soars to fang-tastic new heights as Vee and her friends learn how to find their inner ghoul and rock out!