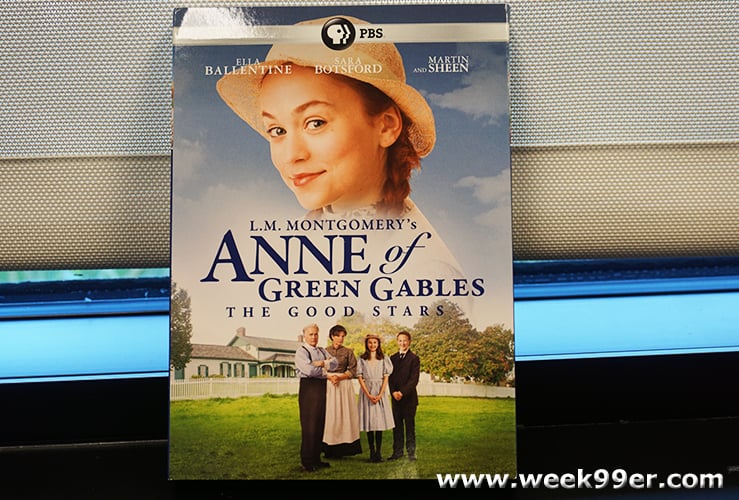 There are some books that you remember reading as kids and are relate-able for different generations, and one of those titles is Anne of Green Gables. The stories are all around Anne Shirley who is coming of age in deals with life lessons and friendships as she transitions in her life from a child to a young adult. The stories maybe set back in a simpler time, but a lot of the issues Anne goes through are ones that young girls can understand and that is why the stories are close to our hearts after all several generations.

Watching these stories come to live on the screen helps us relive the stories we’ve fallen in love with and can bring the stories to younger generations. Last fall PBS brought Anne of Green Gables The Good Stars to our screens and people fell in love with it. In time for the holiday season, PBS has brought The Good Stars home to DVD so fans can enjoy it again.

The story brings Anne Shirley back to Prince Edward Island when she’s 13 years old. The story focuses on her friendship with Diana Barry and how it becomes strained when a boy enters the picture. Filled with a great cast and heartwarming moments this will become a family favorite in no time.

You can pre-order L.M Montgomery’s Anne of Green Gables The Good Stars on Amazon now, and it will be available on November 7th.

About L.M MontGomery’s Anne of Green Gables The Good Stars:

The second installment of the classic best-selling Lucy Maud Montgomery story of a free-spirited teenager on Prince Edward Island returns after the successful Thanksgiving 2016 premiere, which reached more than 3.2 million viewers.

“L.M. MONTGOMERY’S ANNE OF GREEN GABLES THE GOOD STARS” will be available on DVD November 7, 2017. The run time is approximately 90 minutes, and has an SRP of $19.99. The program will also be available for digital download.

In this installment, Anne Shirley turns 13 and faces complex situations with friends, learns from inspirational adults, and experiences an escalating friendship with Gilbert. Her free-spirited nature is challenged by her perceived need to be sensible, a journey fraught with confusion and some unfortunate — albeit amusing — mishaps.

The program, written and directed by John Kent Harrison will once again star critically acclaimed actor Martin Sheen as Matthew Cuthbert, along with the return of Ella Ballentine as Anne Shirley (“The Captive”) and Sara Botsford (“E.N.G.”) as Marilla Cuthbert.

“L.M. MONTGOMERY’S ANNE OF GREEN GABLES THE GOOD STARS” was produced by Breakthrough Entertainment in association with Corus Entertainment’s YTV and the author’s granddaughter, Kate Macdonald Butler, who served as executive producer.