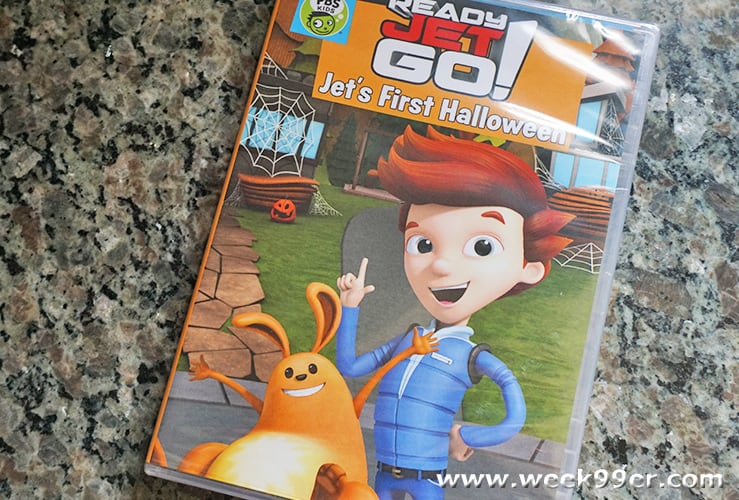 Halloween is such a family staple for many of us and our first Halloween is usually when we’re too small to remember. It’s fun, it’s cute and something we love doing every year. But what if we never experienced Halloween? What if you were new to this planet and Halloween was a new idea to you? That’s exactly what happens with Jet in Ready Jet Go!: Jet’s First Halloween – a new collection from PBS Kids that is out just in time for Halloween!

From a trip to outer space, episodes focusing on space, science, astronomy and technology – Ready Jet Go is quickly becoming one of our favorite shows for smaller kids. With new friends your kids will be off to new adventures with a new friend, but get to experience a first Halloween all over again as well as some pretty galactic adventures with Jet!

Get your copy of Ready Jet Go!: Jet’s First Halloween on DVD now!

PBS Distribution announced the first DVD from the PBS KIDS series, READY JET GO!, with “READY JET GO!: JET’S FIRST HALLOWEEN.” In the four episodes on this new DVD, Jet learns all of the classic Halloween to-dos, such as carving Jack-o-lanterns, dressing up in costumes and trick-or-treating. Along the way, the kids will witness a lunar eclipse and learn all about the Red Moon.

“READY JET GO!: JET’S FIRST HALLOWEEN” ($6.99 SRP) will be available on DVD beginning August 28, 2018, and has a run time of approximately 80 minutes. Episodes of READY JET GO! are also available for digital download.

In “READY JET GO!” viewers go on a journey into outer space, building on children’s curiosity about science, technology and astronomy. The series follows two neighborhood kids: Sean, who has an all-consuming drive for science facts, and Sydney, who has a passion for science fiction and imagination. They both befriend the new kid on their street, Jet Propulsion, whose family members happen to be aliens from planet Bortron 7.

The four stories on this DVD include: