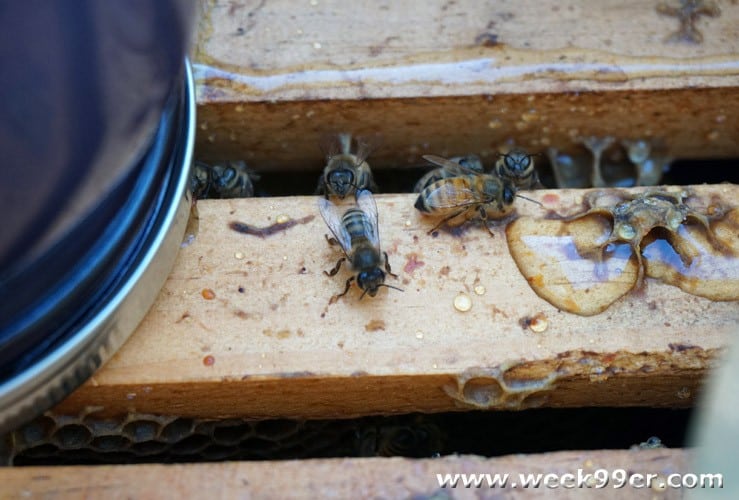 It’s been a couple months since we’ve updated on our bee hive, and there’s a couple reasons for that. First – well we’ve been busy and the bees don’t really require much of our time. But more importantly – since the last update things changed a lot. 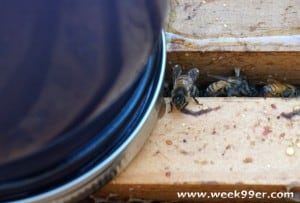 On our last update in July on the hive things were going super well – we had a ton of eggs, larvae and new comb being drawn daily. But when we checked on the hive in August things had stopped. We still had eggs and larvae but we noticed some odd things happening. Some of the comb being drawn was tiny – too small for the bees – maybe it was just a left over and they didn’t play properly? We also saw a lot of dead drones near the entrance of the hive. This isn’t suppose to happen until a bit later, but they were kicking out the guards. When we lifted the frames the nectar was also very wet still – a lot more than it is suppose to be, and it would spill everywhere. The bees are very resourceful, so they cleaned up anything that spilled – but this had us concerned. 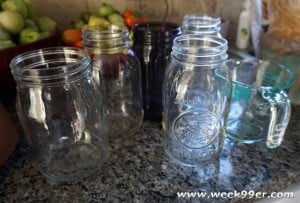 What was happening? It seems this year may be the perfect storm for first year hives. We had a very wet June which put them behind on honey production, then we had extreme heat in July followed by a couple cold snaps in August and September. The bees don’t have enough stores for the winter and without our help wont make it through to the spring. So, last month we started feeding our bees. It may sound like something odd to do, and it’s something that is not usually recommended in natural bee keeping since we’re “interfering” with what they should be doing naturally. However, if my interfering gives them a fighting chance to survive through the winter – I don’t care. It’s that simple. I like having our bees in our yard, and don’t want to start all over next year. 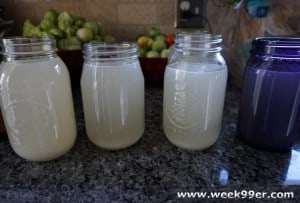 This week I actually gave our bees a second feeding of sugar water. I took 5 clean quart jars filled with 2 cups of sugar and 4 cups of water mixed together. Place the lid on top and secure the band. For the bees to get the sugar water out punch some holes in the top with a nail before filling the jar (similar to the lids we’d make for keeping fire flies in jars as kids!) 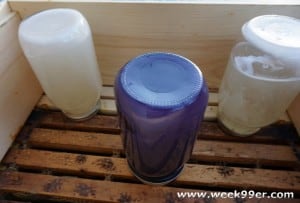 Two to three jars with sugar water will feed your bees for a week, and may be enough to get them through the month or two. I put 5 in our hive to give them about 2 weeks to get through the mixture. Once they’re done with a jar they will fill some of the holes with propylus and seal it off. Remember bees are very neat creatures. After our first feeding I noticed the two boxes they have were still pretty light so we did a second feeding. This however is our last sugar water feeding for the season since temperatures are dropping near freezing at night and we wont want to put frozen water jars in there.

I will say the girls were happy that I put new food in the hive – I didn’t even smoke to put the jars in this time. They started crawling up immediately to start enjoying the sugar water (which was probably warmer than the outside air I let in). They were happy to have a little help. However, they weren’t as happy with me about an hour later once I cut down the stalks from their sunflowers and mowed the lawn right next to the hive.

As a quick note, we did also switch the entrance reducer to the larger opening facing up. That way more air flow can get in during the winter, but the opening up gives them an exit if snow builds up that high. We did this last month, and needless to say the bees weren’t too happy about that change either – and I can’t blame them, I moved their front door! They did adjust and got over the change in a couple days. 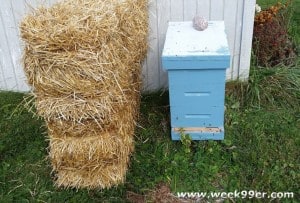 Because fall is here, and winter is around the corner we know that the wind is kicking up as well. To help shield the hive from the bitter wind and help them keep warm inside we’ve created a wind block for them. It is recommended that you block both the northern and eastern sides from wind. The back of our hive (it’s north side) butts up against our shed, so we really needed to guard the eastern part of the shed. We created a wind wall for them out of two hay bails we picked up at a local farmer’s market. If the hive had more boxes or supers, I’d have added more to give them more protection.

At this point, our hive is ready for fall. But since we’re in the Midwest, we know we snow and cold will get here a lot quicker than we want. So we’re actually starting to prepare and make some arrangements and will update you on those very soon as well!