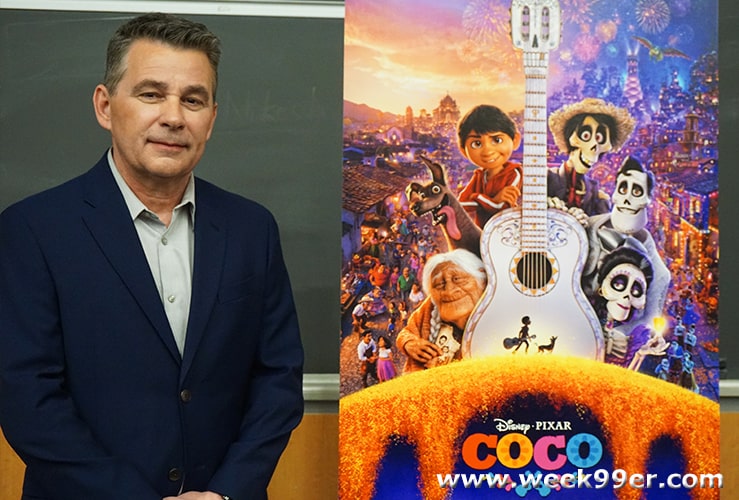 Every Pixar film is an animated piece of art, with each piece of the movie created by hand by the talent that works on the models, and creates the world down to the last detail inside it. Chris Bernardi, a 17 year veteran of Pixar was the Sets Supervisor for Coco and helped shape both the land of the living and the land of the Dead. Bernardi, originally from St. Louis made a tour to different campuses throughout the Midwest including two in Michigan.
During his presentation on how they created the film, he shared his love for the project, the story and the holiday. He took the time to explain the process of making the film to students and revealed that even when watching the movie with friends and families, Bernardi still brings tissues for them for the moment we all know Pixar has that will make you cry.
Every project has it’s unique challenges – what were the hardest with Coco?

One of the biggest was scale. We are still getting our feet wet with a new renderer. It’s a full blown path tracer. Its a bit of a shift for a lot of us who have used the same software for twenty years. We ran into problems with light, because the movie takes place at night. We had millions of street lamps. We had to figure out a lot of ways to light everything up.
We thought our biggest challenge was going to be when we were doing the graveyard shot when each of the tombs was dressed with offerings, candles. We thought that was a lot lights. But when we moved onto the Land of the Dead, we kicked it up a notch.

Amazing, I got to learn a lot about artwork, the culture and music. we had musicians out to Pixar who played for us and explained the meaning behind it. There’s always research into the food, things we don’t about. Most of the stuff on the Ofrenda is stuff you’d normally see. We wanted to do all of the appropriate things. I think we had full time locals at our disposal to answer our questions.

Pixar is known for hiding Easter Eggs throughout the film – can you share a few to look for?

There is a Pizza Planet truck that goes by in one of the clips. There is the A113 that is in a lot of them. There’s always a scene with something from the next movie in every Pixar film – so look for a poster for the Incredibles but as skeletons in the Land of the Dead. I wont point them out specifically but there are a couple of references to The Shining in the sets.

This is second movie in a row that Pixar has had a good connection between the main character and a grandparent – is there a reason they are focusing on this relationship?

A lot of the movie is about remembrance and our ancestors. So from the film standpoint it’s a plot device because at the end you know she’s going to die. At the end there is a transition, and that’s not the sad part. She provides a role for that transition between family that were around and the family we live with, the remembrance of the people that are gone.

The Day of the Dead is a main focus of the movie. Other than the amount of culture, why did Pixar want to focus on this holiday for a film?

It was a holiday that we were always fascinated with. We dug into it a little bit after Toy Story and found such a richness there. There’s so much you can say about that. We have no similar holiday where we think of that. The closest we have is Thanksgiving where we give thanks for what we have. But the idea of remembering your ancestors in a way like that, is such a wonderful sentiment. I think that really drew us all in.
At the end of the film there is a statement “To All of those who inspired us” and all of these pictures unfold and it’s from everyone on the crew and everyone they thought of when they were working on the film.

With a theme like death, how do you think it will be received by audiences?

In Mexico I could feel the love gushing around the theater. I think we try to do the film with a light touch, and there’s a bit of that in the celebration itself. It’s not a sad thing, it’s the idea that people come back to us and we remember the things they loved. It’s the idea of spending some time thinking about them that is really beautiful.

What was the hardest thing to animate in Coco?

Definitely the skeletons. When you’re animating a person, there are a lot of things you can cheat with because it’s covered in skin. But when you have all the vertebrae – it’s such a part of the charter. So for the animators it was really hard. It took a lot of work. When we did our first movie – Nemo it took a lot of work to pull expression out.

Is there something to the animal sidekick thing? You have the cockroach in Wall-E and the dog in UP?

I think a lot of us have dogs. There’s a lot of serious stuff in our team meetings, then we had updates with new puppies or pets. I think a lot of us can relate to it. From an animation stand point they can be ridiculous how they act in the real world, so we try to put that into our films. It’s kind of one of those amazing moments we like to include.

About Coco’s At Home Release:

Disney•Pixar’s “Coco”—the story of a 12-year-old aspiring musician’s extraordinary journey to the magical land of his ancestors—won a 2018 Golden Globe Award® for Best Animated Motion Picture, topped the domestic box office Thanksgiving holiday weekend, became the highest grossing film of all time in Mexico, broke records in China and earned widespread praise, receiving 96 percent from critics and 97 percent from audiences on Rotten Tomatoes. Now this vibrant tale filled with love and laughter arrives home Digitally in HD and 4K Ultra HD™ and on Movies Anywhere on Feb. 13, and on 4K Ultra HD,™ Blu-ray,™ DVD and On-Demand on Feb. 27. 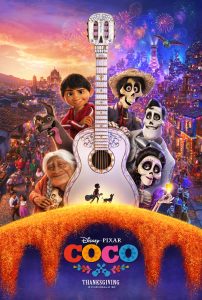 Through fresh and fascinating bonus material, adventurers of all ages will tag along with filmmakers as they soak in Día de los Muertos in Mexico; explore the essential role of music in “Coco;” and learn how the cast and crew personally connect with the film’s message. They’ll step behind the scenes to discover the inspiration behind the film’s creative costuming; Miguel’s beautifully complicated family; Dante the loyal Xolo dog; and the stunning worlds of both the dead and the living. Features also include deleted scenes, insightful filmmaker commentary, the music of Coco and more.

“Coco” is packaged several ways to ensure viewers get the most out of their in-home viewing experience. The Multi-screen Edition (formerly the Blu-ray Combo Pack) includes Blu-ray, DVD and a Digital copy, giving viewers the flexibility to watch the film on different devices. Those with 4K Ultra HD capability may opt for Digital 4K Ultra HD or the 4K UHD Combo Pack, which includes 4K UHD, Blu-ray and a Digital copy. 4K Ultra HD provides four times the resolution of HD, bringing the rich color, textures and sounds to life and immersing viewers in two fantastically animated worlds. Dolby Atmos audio heightens the memorable score created by Oscar®-winning composer Michael Giacchino and his 83-piece orchestra, as well as original songs like “Remember Me” by the Oscar®-winning team behind “Frozen,” Kristen Anderson-Lopez and Robert Lopez.

In Disney•Pixar’s “Coco,” Pixar Animation Studios’ 19th feature film, Miguel (voice of newcomer Anthony Gonzalez) dreams of becoming an accomplished musician like his idol Ernesto de la Cruz (voice of Benjamin Bratt)—despite his family’s baffling generations-old ban on music. Desperate to prove his talent, Miguel finds himself in the stunning and colorful Land of the Dead following a mysterious chain of events. Along the way, he meets charming trickster Héctor (voice of Gael García Bernal), and together, they set off on an extraordinary journey to unlock the real story behind Miguel’s family history.

The voice cast of “Coco” includes characters from the Land of the Living and the Land of the Dead. From the Land of the Living, Anthony Gonzalez (“Ice Box,” TNT’s “The Last Ship”) lends his voice to Miguel, Renée Victor (“Weeds,” “The Apostle”) provides the authoritative voice of Abuelita, and Jaime Camil (CW’s “Jane the Virgin,” Disney Junior’s “Elena of Avalor,” “The Secret Lives of Pets”) is the voice of Papá. Lombardo Boyar (“Happy Feet,” TNT’s “Murder in the First”) voices a town mariachi, and Ana Ofelia Murguía is the voice of Miguel’s cherished great-grandmother Mamá Coco. Sofía Espinosa (“Gloria”) provides the voice of Miguel’s loving Mamá, and Luis Valdez (“Which Way Is Up,” director “La Bamba” and “The Cisco Kid”) lends his voice to Tío Berto, Miguel’s hardworking uncle.