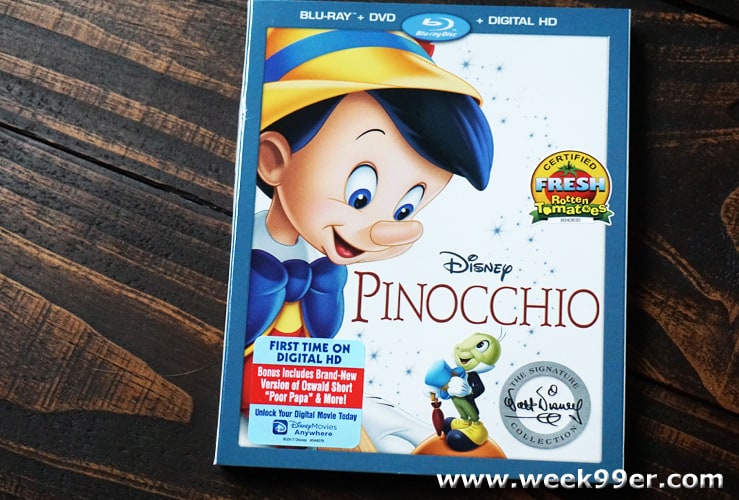 What was the first Disney movie you saw as a kid? I don’t quite remember mine, but I have very early memories of watching Pinocchio. The wooden puppet who becomes a real boy, and the adventure he goes on. The movie has a childlike innocence in the characters, and has a lot of references to an older time. Known as one of the the Disney timeless classic movies, Pinocchio is now available again for your kids to enjoy.

We were sent a copy of Pinocchio Signature Collection on Blu-Ray and DVD before it comes out. It’s on Digital HD now, and will be released on The Walt Disney Signature Collection on January 31st. The new release of Pinocchio helps bring to life our favorite classic characters with digital updating and it’s first release on blu-ray. We loved being able to watch one of the movies we grew up watching again, and see more about how it was made. I absolutely love that the classics are being re-released and this is a great addition to the collection.

“Pinocchio” is considered one of the greatest animated films ever made, with two Academy Awards® — for best original score and best original song “When You Wish Upon a Star” – and a rare 100% rating on Rotten Tomatoes. Now, it will delight a whole new generation of dreamers with its masterful animation, unforgettable characters and award-winning music.

The Walt Disney Signature Collection release includes hours of classic bonus material and exclusive features including a reinvented rendition of “When You Wish Upon a Star” created and performed by music influencers from Disney’s Maker Studios; never-before-seen artwork from the film’s Pleasure Island sequence; archival recordings of Walt himself during “Pinocchio” production; and arecently restored and scored 1927 short featuring Oswald the Lucky Rabbit.

“Pinocchio” tells the tale of wood-carver Geppetto’s beloved puppet who embarks on a thrilling quest – with faithful friend Jiminy Cricket – that tests his bravery, loyalty and honesty, all virtues he must learn to fulfill his heart’s desire: to become a real boy.

D23 is the official Disney fan club named in honor of the year 1923, when Walt left Kansas City, headed for Hollywood and founded what would become the Disney Studios. D23 celebrates Disney’s stories, characters, songs, and experiences that have captured imaginations the world over, offering members behind-the-scenes exclusives, member events, discounts and special offers.