A couple weeks ago, the largest product review I have ever done was delivered to my house – well actually my driveway. I was handed the keys of a 2013 Kia Sorento and told to have fun. We were just heading off to a week long trip to Michigan’s Upper Peninsula so this was the perfect way to test the new car!
Not only did the car have that nice new car smell, it only had 900 miles on it. It had been a while since I have driven a SUV, but it fit like a glove. Oh how I missed having a SUV!  This has got to be one of the most fun reviewing a product I’ve had so far, so make sure you read on to find out more about the Kia, see some pictures and a video from our trip. You may have seen some of the updates on Facebook and Twitter while I was gone as well! 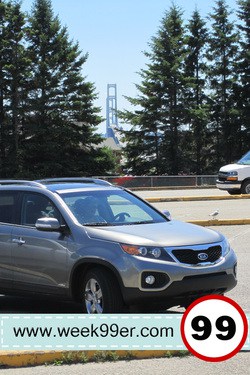 We left Detroit at about 8 am and headed up north – way up north. Our goal for the first night was Newberry, Michigan. It’s a small village in Michigan’s Upper Peninsula, and about 7 hours north. We drove through the day to get there, and over the Mackinac Bridge.

On the way up, we took advantage of the full GPS system the car had, the fantastic air conditioning, and my boyfriend’s favorite feature – the air conditioned Driver’s Seat! This became a favorite feature for both of us as the trip went on, and even in the Upper Peninsula, Michigan was hitting record temperatures. While we drove, the GPS kept us on track and kept us alerted whenever there was a traffic back up. It also had great Point of Interest Icons for us if we needed a rest area or a food break. 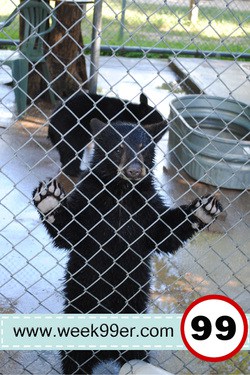 Besides the great technological features, the Kia also has several other great things. These include the third row seating. The Sorento can seat up to 7 people. Since it was just the two of us on this trip we dropped both the 2nd and 3rd row of seats down and loaded it up with all of our camping gear. It held everything we would need for a full week of camping – tent, clothes, food and more. It also has a privacy bar as well a net to keep your items organized in the back.

Once our camp was set up for the first few nights we went to explore the local area. We hit local attractions such as Oswald’s Bear Ranch – I will admit, I’m glad this is the only bear we encountered on our trip! We did find out that baby bears love fruit loops and say “nomnomnom” when you give them some! 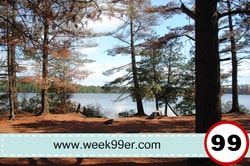 Part of our trip included a visit to the Pike Lake area, which was devastated by the recent Duck Lake Forest Fire. This was another part of the trip we needed the GPS for. While most of the area is mapped out, the seasonal roads were not always on a map. We took several dirt roads to get out to this portion of the U.P. Without cell service in this region, you can’t just call for directions.

I will admit, I was pleasantly surprised to see the GPS knew the name of some of the two-tracks we took. However at one point, it did put us in the middle of private hunting lodge property, that was slightly scary! 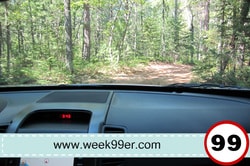 Two other great features we found while off roading it (this was somewhere in the woods near Lake Superior) was that the car could be switched to Manual if needed. We luckily didn’t get into any sand traps that we needed it, but the availability was there if we needed it.

Another one of our favorite features came in handy while we were off roading it – power mirrors. Yes, my sedan has power adjustable mirrors – but these retract. I know their original intention was for if you’re parking in a tight spot, but when trees are close it was nice to pull them in to protect them. As a side note to this, I have noticed that if you “beep” the car twice it does this as part of the locking system. So before we would leave the car for the night we would make sure it’s “ears were in”.

The Sorento was All Wheel Drive which was fantastic for our off roading adventures. We were assured that it also has 6 air bags and a “anti-tip” feature to keep us upright. I’m very happy that we did not have to use those last two features! 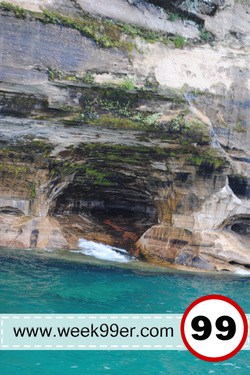 After days of off roading it and camping, we took the car up to Munising, Michigan. Unfortunately we couldn’t take it with us for the tour of Picture Rocks – but again, after the heat on the water it was nice to get in the car with that fantastic A/C.

The ride up to Picture Rocks the car was happy to be back on paved roads. The Sorento has a 6 cylinder and I can tell you it loves to drive. It’s a smooth ride in both city and rural settings. It also has great suspension to handle off road scenarios!

Following Munsising, it was back to camping. This time was at Tahquamenon Falls. Paved roads, however no lights anywhere near here – it gets awfully dark at night. Since we were so far north, we were always in and out of cell phone range. We figured out the one road we had to cross to check in with family if needed. But this also meant we were without radio service or other things we were use to. Thankfully, the Kia had been fully equipped with Sirius Satellite Radio – although we did find a few pockets where we lost that service as well. 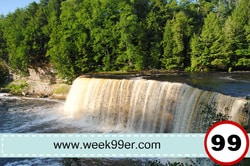 I think the couple weeks with the trip has spoiled me a little bit. The car features a push button start system. It’s fantastic – but since the car runs so quietly, I have exited the car a couple times without remembering to turn it off. Since I have the key fob in my pocket – the car lets off a loud beep to remind me. 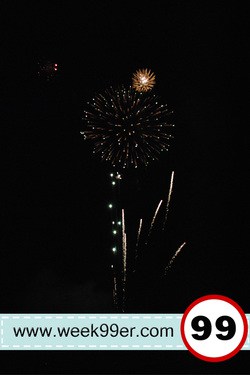 Everything is very easy and intuitive to use in the Sorento, including the key-less entry. I kept the fob in my pocket the whole time and was able to get in and out of the car without ever using the key. It was great just using the button on the door with arms full of supplies, or to quickly get in from the heat.

We took the trip from the falls to Paradise for the Fourth and enjoyed a fantastic fire works display! It would be something I would suggest to anyone traveling that way over the holidays – that little village will not disappoint you!

Check out a short video from our trip:

We have been back in the city for a few days now, and I’m still enjoying the Kia. I have to say, I will be sad to send this one back! It’s nice doing my errands, shopping and collecting my packages in a large vehicle. It handles the roads well in the city where 55 mph really means 80 mph.

We’ve taken the Kia from one point of Michigan to the other, off road to paved streets. From the Detroit River to the crystal blue waters of Lake Superior – and it has not disappointed us yet! 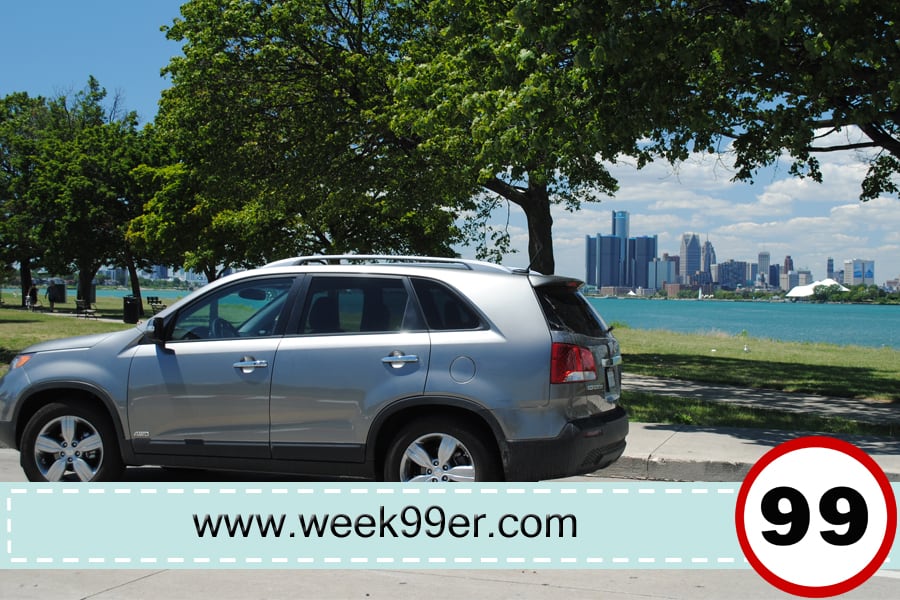 6 Travel Adventures You Need To Try Before You Die