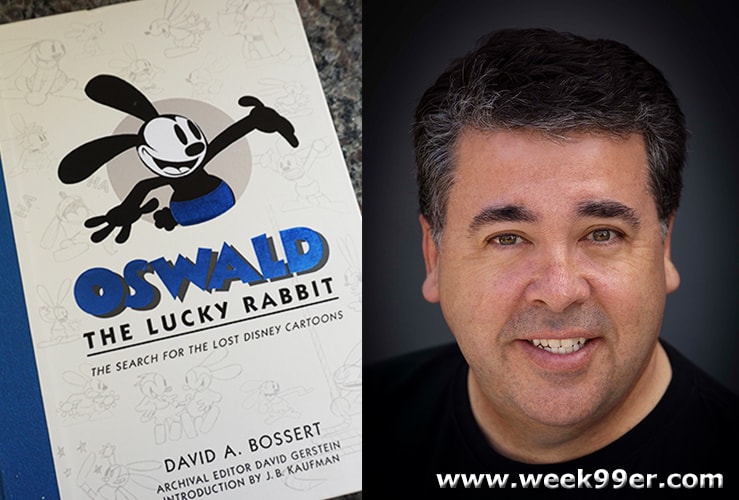 We all love Mickey Mouse and pretty much every character that comes from Disney. But years before Mickey graced the screen Walt Disney created another character Oswald The Lucky Rabbit. Oswald’s story and history isn’t as lucky as his name and it’s taken decades to find a portion of his stories that Disney originally created. I sat down and talked to David Bossert, author of Owsald The Lucky Rabbit: The Search for the Lost Disney Cartoons  to find out more about what lead him to search for Oswald and the quest it took him on. The story of Oswald takes you to unlikely places and eventually to the creation of Mickey. But without Oswald, there wouldn’t be the Disney empire they have today.

Tell me a little bit about the history of Oswald. He comes before Mickey but was lost somehow?

Walt developed Oswald after he finished the Alice comedies, and it was his first big success, but he didn’t own the character. He was only a contractor, who created the cartoons. He didn’t actually own the character and he lost the contract and that basically forced him into creating Mickey Mouse.

I think it’s a wonderful story, he didn’t just feel sorry for himself and lie down and belly ache about it. He turned around and said “I’m always going to own my own characters from now on”.

One thing I noticed in the book, when you think of Walt Disney, we tend to think of the nice older gentleman smiling in the pictures, the creator of Mickey Mouse and the statues. There is a line in the book that says that he was becoming verbally abusive to the animators? Can you explain that a bit more.

During that period, Walt was under a lot of pressure. You have to realize he was a young guy, he’s running a business and he essentially was under a tremendous amount of pressure. And wasn’t making as much money has he’d like to have been making doing those Oswald cartoons. And the producer Charles Mintz, was always complaining about the quality of the cartoons and had his own opinions about stuff. From the telegrams and correspondence that I went through, it didn’t seem like they had the biggest or best relationship. They had essentially a contentious relationship. Walt was constantly trying to get more money, and Mintz was constantly berating Walt on the cartoons. I think Walt was under a lot of pressure and by all counts was a bit abusive to some of the artists.

I find it interesting, because that is not the idea that anyone has of Walt Disney now. It puts him in a bit more of a human light instead of the “friendly old grandfather” everyone knows him as.

Most people have this vision of Walt from the Sunday night shows. As this kind of grandfatherly guy who was always pleasant and jovial and everything. But he was a human being like everyone else and he had his moments. 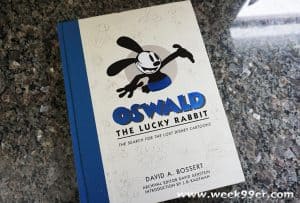 Was it his daughter who requested to get the rights back to Oswald?

How were you originally pegged as the person who was going to go out and find the Oswald Cartoons?

It was just one of those moments, I had only just read an article that the Oswald Cartoon was in this Hollywood Memorabilia auction. At the moment I finished reading that article, I got an email from a couple of executives at the studio that was a forward of someone who was inquiring about Oswald. And they thought I knew about it, and I said “Oh by the way there’s this lost cartoon that is up for auction, I think we should buy it.” They responded that it was a great idea and we will arrange some funding for that. They allowed me to go bid for it and I got the cartoon.

That kind of set me on the path of saying “if we got this one can we find other ones out there.”

So from that point on it basically became your project to collect all of the Oswalds?

I was part of the project. I brought on a guy named David Gerstein who was an expert on silent cartoons. We hired him as a consultant who came on board to help and locate the lost ones. We had other people involved in the restoration efforts and things like that. I would say I was part of the team.

Have you collected all of the Oswalds? Or as many as possible at this point? 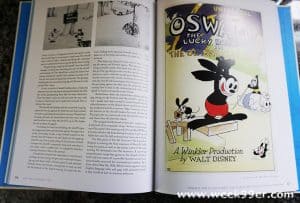 At this point, we found an additional 6 of the 13 that were lost. That means there are 19 of the 26 now known. Since I’ve left we’ve identified 1 more that we’re looking to get scans on. I believe the others are out there, so we’re kind of poking around and still looking for them =.

The ones that have been found, are you digitally scanning them? Are they currently available anywhere for people to enjoy?

A few of them are. I can tell you that Africa Before Dark was released on the latest Bambi Blu-Ray release. And I believe Hungry Hobos was released on Snow White or Pinocchio.

Since you left Disney, what are you doing now?

I’m writing full time actually and I’ve written a whole bunch of books for Disney and Disney Publishing. I also have The Art of Tennessee Loveless, the 10 x 10 x 10 collection of Mickey Mouse Paintings. I also just finished another book on the making of the Nightmare Before Christmas that will be out next year. It will be out before D23 in LA in 2019.

Not a lot of people know who Oswald is, I only remember images of him from when I was a kid. Like you said in the book, it’s just changing the ears a little bit and you have Mickey Mouse.

Oswald was developed by Walt. I think in the early 20’s and 30’s characters were able to be a little closer to one another than they would be allowed to today. In fact, Julius the Cat in the Alice Comedies was looking a lot like Felix the Cat, who was really popular at that time from the Pat Sullivan Studios. It’s not a big leap why the early Mickey is constructed in a similar fashion to Oswald. And Peg Legged Pete was in the Oswald Cartoons but he was a bear, and becomes a cat in the Mickey Cartoons.

When did Walt start creating Mickey?

When Walt lost the contract, he still had to finish the existing contract he had of 26. He was working at night and on the weekends on the first 3 Mickey cartoons, while they were finishing off the Oswalds. Lillian his wife and Roy’s wife Edna were painting cells on the kitchen table for the Mickey Cartoons. They were were in their garages on the weekend at the Hyperion studio. It was really an interesting time, and they were scrappy and determined and got it done.

Obviously you had a hand in finding several of the Oswald cartoons, other than bringing attention to the cartoons and telling the story – who do you think will like this book?

The book is marketed mostly towards, not only Disney fans, Film history fans and animation fans in general. I think when you look at the book it gives you a complete history. It aggregates everything we know about Oswald into one book. There is no other reference book out there that exists with that kind of information. When Walt lost the contract, the stuff just kind of went to the wind. Disney didn’t really hold onto much of it. And then when they got the rights back to those 26 that Walt created, almost 60 years had passed. Stuff was all over the map. Disney didn’t have very much.

Why would he keep a lot of the early work?

They occasionally have found some Oswald drawings in the Animation Research Library at Disney when they’re unpacking boxes. There’s over 70 million pieces of art in the Animation Research Library at Disney, so they’re still cataloging stuff, and still discovering things. Sometimes they pull out a stack of animation from a box, and there’s a folded piece of paper as a divider, and that folded piece of paper is an Oswald drawing.

Will this lead to them highlighting Oswald in the Archives?

There’s a little bit of interest and popularity surrounding Oswald now. There is even a walk around character at Disneyland’s California Adventure. When you walk into California Adventure one of the first things you see is Oswald’s Garage. There is a lot of memorabilia, and merchandise around Oswald. And he is hugely popular over in Japan. I think there is a slow build of people liking the character.

What was the hardest part while you were researching and trying to find Oswald?

It was a fun project for me to work on. Part of it was the detective work involved and finding some of these some of these films. And putting all of the historical parts together.

The hardest part was really pulling all of the material together from a bunch of different sources and getting permission to use it in the book. A lot of the animation drawings used in the book are owned by Universal. Some of the stuff we found from collectors we had to get permission to use, but then there were underlying rights to Universal Studios. It was an interesting puzzle to put together.

These types of projects are really team efforts. It is the only book on Oswald currently available and has a tremendous amount of images that haven’t been seen in 60 or 70 years.

You can get Owsald The Lucky Rabbit: The Search for the Lost Disney Cartoons online.

Books to Gift This Holiday Season

Backroad Buildings Takes You on a Visual Adventure