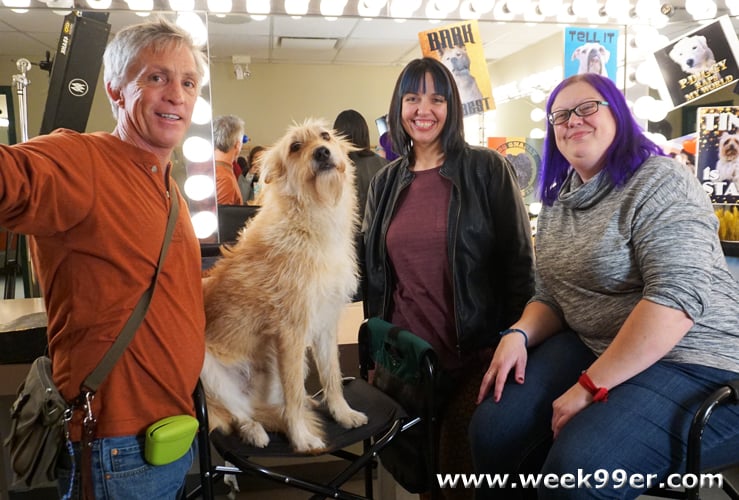 Working with animals is never easy, but you wouldn’t know it by talking to Mark Harden. He is just one of the trainers on the set of Pup Star: Better 2Gether. The sequel to the original Pup Star movie is filled with cats, dogs and of course a handful of humans as well. While we visited the set of Pup Star 2, we were able to talk to Mark and one of the stars Lucas, who was not only very talented but also adorable.

A lot of the dogs on the set are rescues, and some are found by other trainers. The dogs are trained, given great homes and rehabilitated. Mark told us what it’s like working with dogs, why shelter dogs make some of the best dog actors on the market.

Do you ever get a dog that is untrainable? 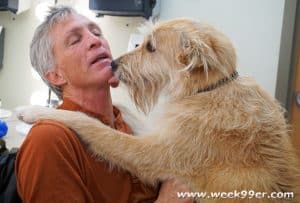 No animal is untrainable. Not everything is trainable for our purposes. He’s borderline. He’s not the world’s greatest movie dog, but looks wise overcomes that. He had an identical twin brother which made it impossible to say no to them. In our work, two that look alike is key. It’s two different personalities to create a character, and insurance companies like having a second.

How do the dogs get paid for their work?

We don’t just give them treats. This is their paycheck. They work for their food. We know how much it takes to maintain them, and this is complete diet. He’s basically is working for his food. They don’t get free food and then treats. They learn to work for it.

How does that work when they’re not on set?

We have a set diet for them, we know what they need to maintain and be healthy. And when we go to work them, we give then have half of their food in kibble, and half in their work “treats”. So we use half for their training and half to supplement them. When we go to treats it’s usually meat, chicken or beef.

How long does it take to train the animals? 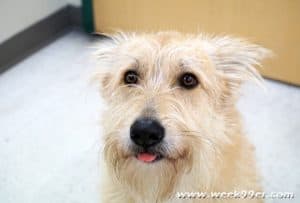 We’re always training them. But it usually takes around four months to get a dog from the shelter to the stage.

How old is Luke and how old was he when you got him?

He’s just about two, and we got him when he was just under a year. Robert met him up at our compound. We’re out of LA, Animals for Hollywood.

Do the animals live with the trainers?

We keep about 20 at the company. We brought about 25 up here, but we sublease some from other companies. We got a couple from local people to work with for a couple weeks.

When we do take a dog in and train them, do you bring them into your home 24/7? 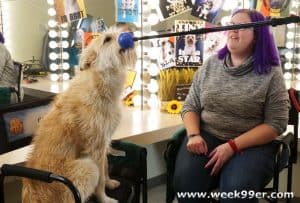 It depends on the dog. It’s not always best for them when we do that. We do our best to acclimate them to our world. So if some dogs really want to suck up, and they get more anxious when we have to create a distance. Our job isn’t to make the dog look like he loves me, but he loves that actor or that one. Some dogs are really good at balancing both.

I did Russell Madness with Robert, and that Jack Russell I could take anywhere. He was really good acting like he was everyone’s dog. It’s his personality. He’s not one of those dogs that really bonds. It’s just not the same as your pet.

Even someone like Luke, I kept him at my house for the first three weeks and realized that he was really needy and clingy. If I create a bond it’s unrealistic, so he needs to go with other trainers and a little distance.

They’re not pets per say, I do keep one of the Akitas with me, and David, another trainer, keeps another with him. A lot of the little dogs live with trainers because they’re not good kennel dogs.

You mentioned that a lot of the animals are rescues – is there a reason for that? 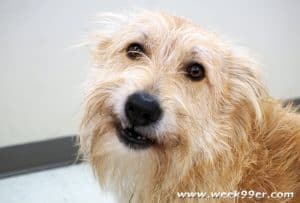 Mostly we have failed pets. That’s what we work with, shelter dogs, breed rescues. A lot of them prefer the company of other dogs, and are use to living in kennels. Home isn’t their favorite place.

In the states, a lot of different breeds have groups that represent them. They don’t want them to end up in shelters. Shelters call those people when they receive a certain breed, it’s the first way to free up cages. A lot of responsible breeds like Golden Retrievers are never in there for more than a day before a breed rescue comes for them.

Luke kind of looks like the classic street dog – is that what he’s cast as? 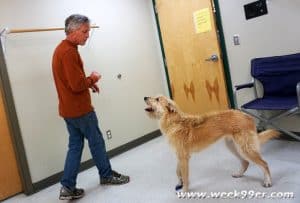 The funny thing is whenever we have a movie movie, a feature film where you have to keep the dogs three or four months working. So if they cast a dog that has a double. We want them to look like a mutt, that the American audience doesn’t really know what it is. A lot are registered breeds, but not AKC so not ones people aren’t familiar with. So we can sell them as a mutt.

How many dogs on the set are rescues instead of breed actors for Pup Star?

I know the German shelter is a rescue, the Old English is a rescue. Luke is obviously a rescue. Dexter our black lab is a from an downtown LA shelter. The mutts are always from the shelters. I’d love to say that we do it just to do good things but we don’t. They actually make better working dogs because they’ve failed their way to success.

Why are shelter dogs ideal for acting? 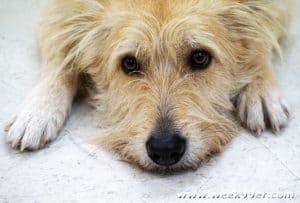 All the things they’ve done wrong and gotten in trouble with – they succeeded it. “I want to dig, I want to jump a fence, I want to bark until my eyes pop out.” They do these things to the point that people can’t stop them. So in their mind, they’ve really succeeded. They don’t realize they’re at the shelter and they’re in jail. In their minds they’re winners. “I got away with this, and I got away with that” In our work, they keep trying. Just because you say no, they don’t stop. “What if I try it this way or that way” They have a little more umph than a well behaved, well raised, well adjusted dog. They have a little more push back, and aren’t going to get upset when you tell them to do something.

Their misbehaviors we can can always put them on queue and use them: Digging, barking, climbing. Get them to do to it on command and they knock it off when they’re just hanging out.

The best way to get a dog to shut up is to teach him to speak. Now he knows what it is and he will just relax. 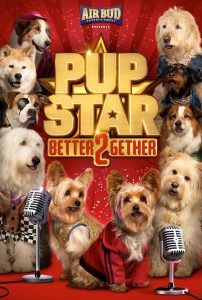 1 thought on “On the Set of Pup Star: Better 2Gether with Luke, a Former Shelter Dog Turned Actor and his Trainer Mark #Pupstarmovie @airbud”