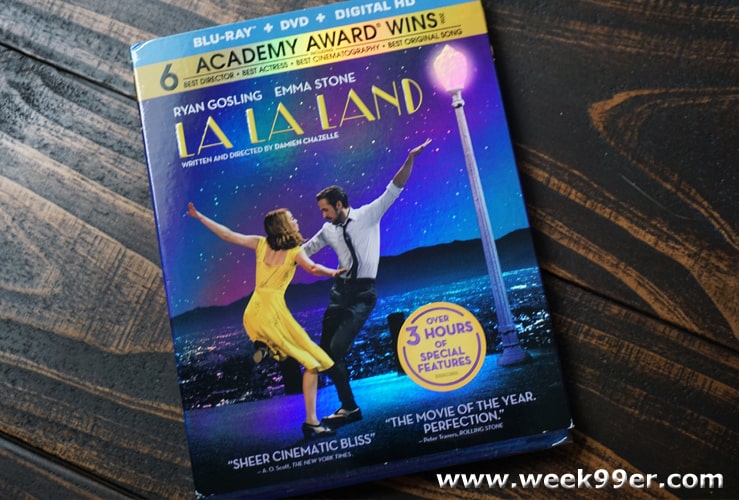 There’s just something about classic Hollywood and the films that came from it that has a bit of beauty and class to them. It’s not that the current movies aren’t magical, but over the decades they have lose that nostalgia we all love and have for the old classics. That is until La La Land came into theaters last year. It won virtually every award it was up for and even more so it won the hearts of the viewers.

Lionsgate sent us a copy of the film to watch and review. We weren’t able to La La Land in theaters, and had only heard a few reviews from friends. The movie follows two young hopefuls in Hollywood as they set out to make their dreams come true. The hopeful actress and musician find each other and live out some of their dreams together, in the style of old Hollywood. The combination of the undying dream, the hope and the glitz of the old Hollywood feel is addicting and captivating. The movie grabs you and is one you’ll want to watch again and again. The movie may not have the story book ending we would like, but it is a great dream and fantasy to hold onto.

La La Land is available everywhere on Blu-Ray and DVD. It has a total run time of 128 minutes and is rated PG-13

Winner of 6 Academy Awards® including Best Director for writer/director Damien Chazelle, and winner of a record-breaking 7 Golden Globe® Awards, LA LA LAND is more than the most acclaimed movie of the year – it’s a cinematic treasure for the ages that you’ll fall in love with again and again. Emma Stone and Ryan Gosling star as Mia and Sebastian, an actress and a jazz musician pursuing their Hollywood dreams – and finding each other – in a vibrant celebration of hope, dreams, and love.