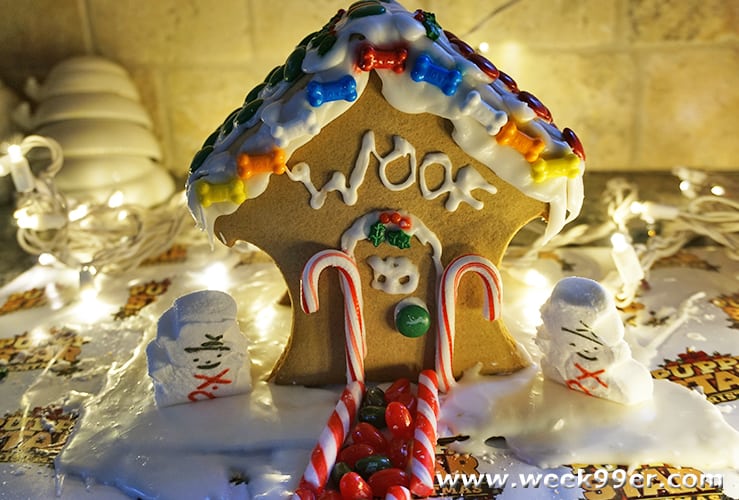 It’s time to start a new tradition with your family this year at the holidays. Maybe it’s a new favorite movie for the season, or maybe it’s time to get a little creative in the kitchen. This year for the holidays we’re happy to add a new family friendly movie to our collection with Puppy Star Christmas from Air Bud Entertainment and we even made a gingerbread house to celebrate.

Air Bud Entertainment sent us a large kit of goodies to celebrate the new movie (check out the video below) and it included candy to use in a gingerbread house. It’s been years since I’ve made a gingerbread house, but figured I would give it a try. But being out of eggs – I had to find a receipt to make and egg free icing recipe to decorate with. With a pile of candy, the icing and a house ready to be decorated we made a gingerbread house to enjoy while watching the new movie. We even live streamed decorating the house, so you can see just how we made it and how it turned out!

Getting ready for the holidays in your house? You can watch Puppy Star Christmas now – we share our thoughts about the movie below. Or take the time to make your own gingerbread house with your little one! It’s a great time to start making new traditions with your family.

See what came inside our Puppy Star Christmas holiday Kit!

With everything in our kit we built our own ginger bread house. It’s not something we’re use to doing, but we took the challenge head on and made our best – and we did it live! You can watch the whole process of making our gingerbread house below!

The Holiday Season is About Family with Puppy Star Christmas! 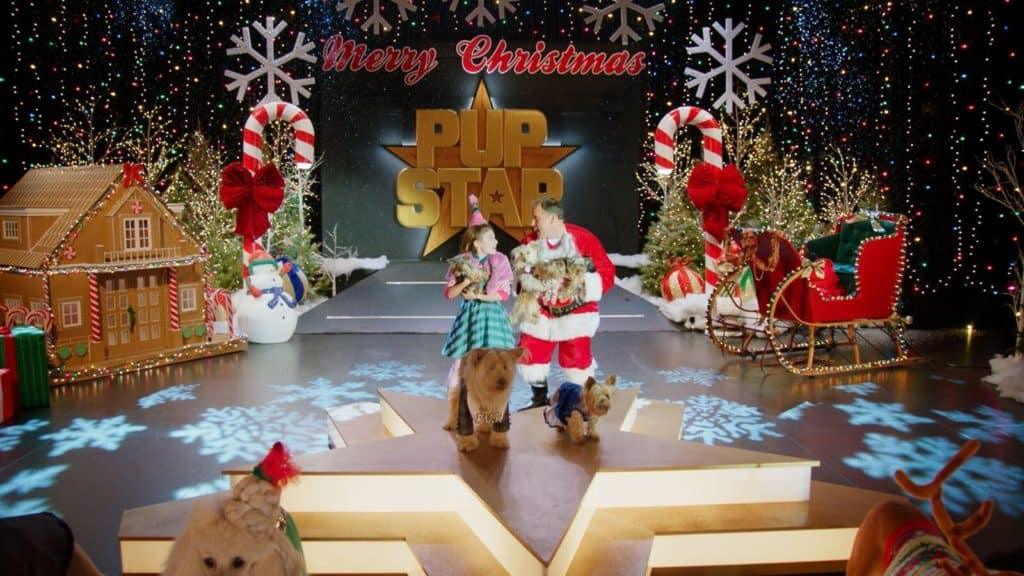 Holiday movies seem to be everywhere and they’re not all for kids. Yes, tuning in to your favorite holiday movie is great  but making sure you have one that is not only kid friendly but doesn’t have scary conflict so that even the smallest family member can enjoy it should be key. And this year you can watch Puppy Star Christmas with your kids, and it’s streaming right now on Netflix.

The fourth movie in the series, Puppy Star Christmas brings back Tiny, P.U.P, Scrappy and all of our favorite talking and singing dogs in a fun filled musical movie. The movie starts with Tiny and P.U.P getting married and their family growing by including four new puppies that not only can be a little bit of trouble makers but also want to get into show business like their parents. But of course, it can’t be as easy as performing with Santa on Stage. Roland, Julio an their friends want to get back in the spot light and have a plan take back Pup Star once and for all.

With a visit to the North Pole, appearances by Santa, the reindeer and of course the Elf Workshop – the movie is filled with holiday cheer your kids will love. But at the heart of it, the story is about the importance of family at the holidays and working together with those you love. 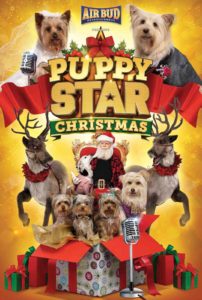 From the world of PUP STAR, and the creators of AIR BUD & AIR BUDDIES, comes a new holiday treat for the whole family, PUPPY STAR CHRISTMAS! The family just got bigger, as newlyweds, Tiny and P.U.P, are spending their 1st Christmas with their new pups: CINDY, ROSIE, CHARLIE, and BRODY. Unfortunately, the pups are more interested in getting gifts than enjoying a holiday with their family. To show what Christmas means to them, Tiny & P.U.P plan a ‘Pup Star Christmas Special’, showcasing their new family, pup-tastic songs and a magical appearance of Santa & his reindeer!

But, little do they know, Bark and his mean team of Kano, Roland & Julio, have a new scheme to disrupt Pup Star and steal Christmas. They hijack Santa & the North Pole for their own personal gain. With Roland acting as the new Santa, and Bark forcing people to pay for Santa’s good will, the holiday spirit is at an all-time low. When the pups find themselves in the North Pole, it’s up to them to save not only the Pup Star special, but the Christmas spirit itself and discover the true meaning of the holiday. PUPPY STAR CHRISTMAS is a fun, grand musical adventure, filled with singing pups, new songs, and a story filled with cheer and surprises!

Debuting on NETFLIX on November 20th, Air Bud Entertainment, the creators of the iconic ‘Air Bud’ Golden Retriever films that became a staple for generations of moviegoers, and the groundbreaking ‘Disney Air Buddies’ talking puppy adventures, proudly unwrap an all-new holiday adventure film — PUPPY STAR CHRISTMAS.    A song and dance-filled movie for the whole family, PUPPY STAR CHRISTMAS continues the fantastic adventures of the talking (and singing) canine characters that have recently gained overwhelming popularity in the PUP STAR franchise of films. These action-packed and song-filled family stories, feature an adorable cast of dogs including talking Yorkie, ‘Tiny,’ and ‘P.U.P.,’ the street-smart rapping mutt who stole Tiny’s heart. 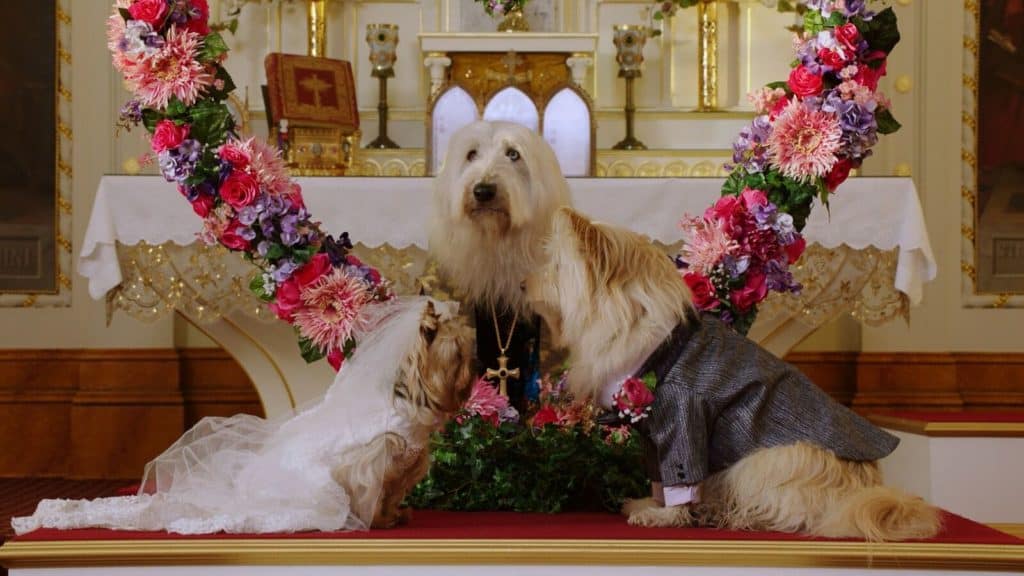 The all-new movie begins as Tiny and P.U.P tie the knot in an elaborate song with the largest dance number in franchise history, before introducing audiences to the couple’s delightful litter of four precocious new puppies.  The mischief, fun and adventure continues, as Christmas nears and pup siblings ‘Cindy,’ ‘Rosie,’ ‘Charlie’ and ‘Brody’ inadvertently stow away on Santa’s sleigh, ending up at the North Pole where they uncover an evil plot to steal the world’s Christmas spirit.

“At Air Bud Entertainment, we love to create wholesome, live-action films that are fun for the whole family. We’re excited to continue the PUP STAR franchise like we did with the Disney Air Buddies films, by extending it with a great new holiday-themed story,” said Robert Vince, CEO of Air Bud Entertainment.  “ We know the holiday season is such a special time for families, and we’re thrilled to create a great new film that they can watch together to celebrate the season. Debuting ‘Puppy Star Christmas’ on Netflix at Thanksgiving will give the perfect gift for families who are looking for a new, fun way to kick off their holiday traditions!” 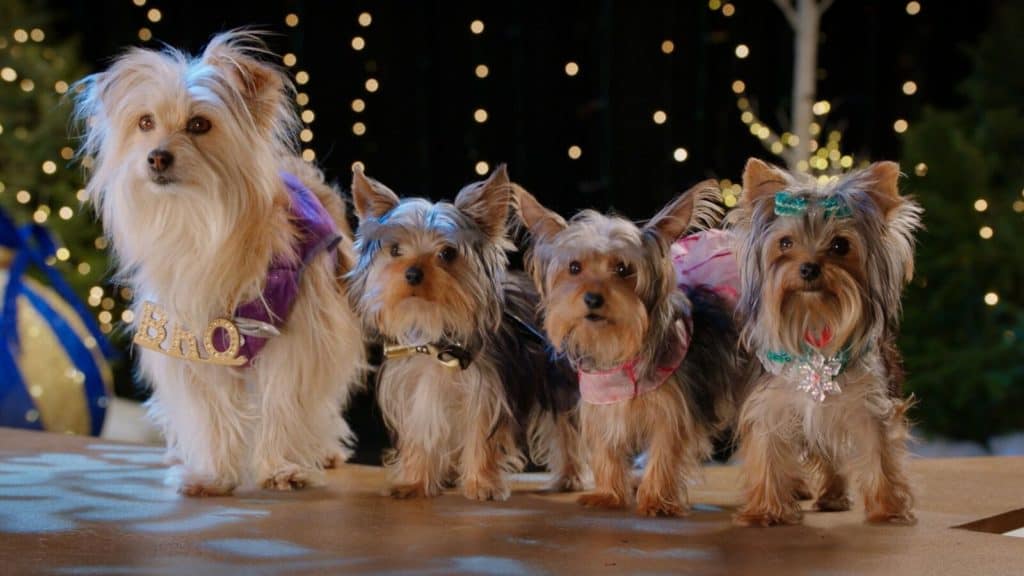 The PUP STAR franchise launched in 2016 with the overwhelming hit also called PUP STAR.  The cast of canine stars returned in 2017 with PUP STAR: BETTER 2GETHER, and most recently saw the May 2018 Netflix debut of PUP STAR: WORLD TOUR, which took the characters on a global adventure that demonstrated music really is the universal language!

PUPPY STAR CHRISTMAS is produced by Air Bud Entertainment, the creative force behind the #1 live-action, direct-to-home movies in the family category.  The film is directed by “Air Bud” and “Disney Air Buddies” veteran Robert Vince, produced by Anna McRoberts and written by Robert Vince and Piers Rae.