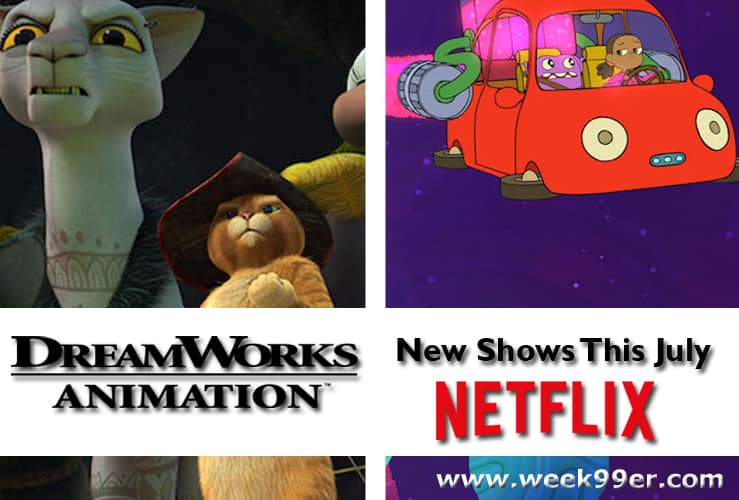 This summer, some of our favorite characters are making their way back to the screen. The Adventures of Puss in Boots brings back our favorite feline for a third seasons with awesome new stories. And towards the end of the month, Adventures with Tip and Oh bring back our favorite Boov and their human friends. Get ready for some zany shows and antics that these shows are bringing for your summer viewing!

THE ADVENTURES OF PUSS IN BOOTS: Season 3 – July 15th on Netflix

Who didn’t fall in love with Puss in the Shrek movies? We did, and still coo when he gives those big eyes. But his character has grown so much since the movie series, and in The Adventures of Puss in Boots, the cuddly crime fighter is is up for any battle!

The world’s most legendary swordfighter, Puss in Boots, swings into action with more of your favorite fun-filled magical adventures in the all-new Season 3 of THE ADVENTURES OF PUSS IN BOOTS!

Season 3 picks up where the epic cliffhanger from last season left off:  Puss must go toe-to-toe against the evil Bloodwolf.  When Puss realizes he can’t do it alone, he forms the Senior Defense Squad and joins a rowdy band of Sky Pirates to help the fight against the Bloodwolf.

Puss comes face-to-face with his ex-girl-fish-monster FeeJee and the Emperor of the Merpeople, takes control of the flying pirate ship when he is crowned Captain, and leads an army of skeletons back to San Lorenzo. Artephius creates a twin for Puss, Kid Pickles becomes King of San Lorenzo for his birthday and so much more! And the only way to watch is on Netflix July 15th!

Home was one of those movies that took a lot of people by surprise. I’m not sure why it didn’t get the good reviews it should have when it came out, but it instantly became a household favorite. We still use lines from the movie in conversation, and ask if we can “Come into the out now”. This new cartoon version of the characters brings you right back to where the characters left off, and takes you through their life after the Boov and the humans work together to create a new world. Besides silly episodes, great songs to get you moving, the show is genuinely funny and one adults will watch even without their kids!

Get ready to hear a lot more about this show in a couple weeks- You wont believe how good it is!

What happens after a misfit alien named Oh conquers Earth, befriends an adventurous teen girl named Tip and together they save the day?  Oh moves in with Tip and her human family and finally discovers the true meaning of home.  The galaxy’s dynamic duo are back in DreamWorks Animation’s HOME: ADVENTURES WITH TIP & OH, an all-new Netflix Original Series jam-packed with outrageous laughs, tons of heart and contemporary urban pop music performed by teen singing sensation Rachel Crow (Rio 2, X Factor). Life on earth will never be the same!

Picking up where the hit 2015 animated film left off and building upon their enduring friendship, this coming-of-age buddy comedyfollows fearless Tip and overenthusiastic Oh, as they navigate the crazily combined human and alien culture they live in, finding adventure everywhere they go.   The series will also include tons of memorable and toe-tapping original music that highlight Rachel Crow’s extraordinary vocal talents.