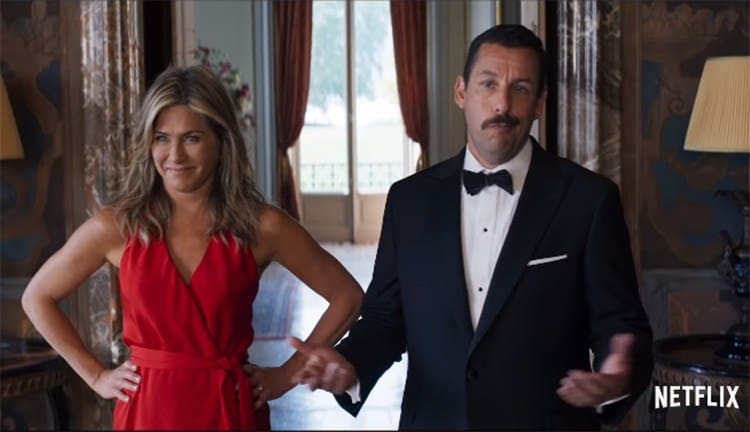 It’s not every day that the movies we watch are on the big screen. Now that we stream more and more, you can find a wide variety of movies at your finger tips at any point. But not all movies are the same, and we all know we have found more than a few duds that we thought would be a great couple hours of entertainment.

But, every once in a while, there is a gem that we would have no problem watching over and over again. And just released on Netflix is one of those gems – Murder Mystery. The comedy mystery movie staring Adam Sandler and Jennifer Aniston – which at first sounded like an odd couple. But on the screen together, their chemistry is undeniable.

Caught in the middle of a real life murder mystery, the movie takes you on an adventure through Europe as the couple tries to find out who-done-it while clearing their names at the same time. The movie will have you laughing at the situations the couple gets into, the characters they interact with and will have you wondering who really did it.

While the movie nods at Clue, it will have you laughing through the whole thing. And the best part – the movie is on Netflix now, so you can watch it over and over again to try to find the details you may have missed. What we enjoyed about the movie was how cinematic it actually felt. We were able to screen the movie in a theater – and it felt like it belonged on the big screen. There have been times we have paid a lot of money to see a movie that wasn’t this quality, and the fact you can get Murder Mystery as part of your Netflix subscription – makes it even more enjoyable.

When an NYC cop (Adam Sandler) finally takes his wife (Jennifer Aniston) on a long promised European trip, a chance meeting on the flight gets them invited to an intimate family gathering on the Super Yacht of elderly billionaire Malcolm Quince. When Quince is murdered, they become the prime suspects in a modern day whodunit. MURDER MYSTERY reunites Adam Sandler and Jennifer Aniston along with an ensemble cast of global talent. Directed by Kyle Newacheck. (NETFLIX)