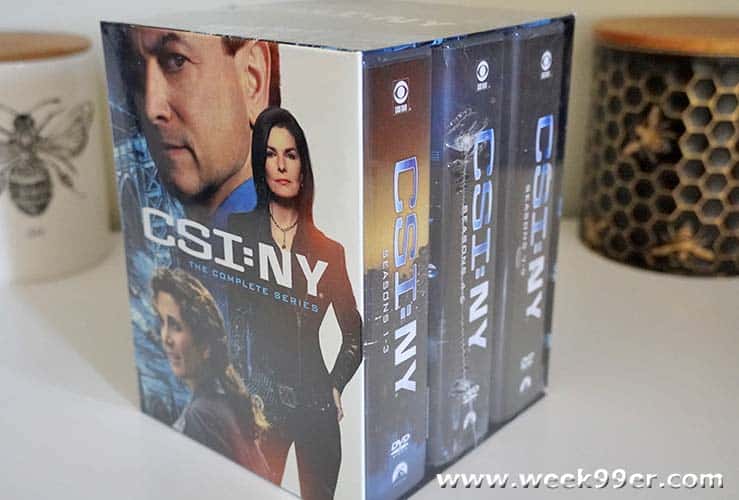 We all have our favorite shows and fandoms. And some of these shows are things we want to keep and watch again later. From favorite shows, actors, comedians, cartoons for kids and holiday collections – we have some great gift ideas for the fans on your list!

Get CSI NY The Complete Series

The ’70s was a special time for soul music, a decade filled with legendary artists like Al Green, Teddy Pendergrass, The O’Jays, Marvin Gaye, The Stylistics and so many more. And for home viewers, it was also a boon, as week after week, Burt Sugarman’s The Midnight Special – television’s very first live music show – made it a point to feature soul artists performing their biggest hits live and uncut in the prime of their careers. While “Soul Train” also featured these acts, only The Midnight Special gave viewers actual live performances instead of lip sync, treating them to virtual front row seats for performances by the most talented soul singers of the time.

Available for the first time at retail, the greatest performances from The Midnight Special featured in one spectacular 10-disc DVD collection: THE SOUL OF THE MIDNIGHT SPECIAL. Fans of ‘70s soul will thrill to an unforgettable line-up of legendary soul artists performing their greatest hits uncut and unedited — just straight-from-the-heart singing with live musicians in front of a live audience. And now, Time Life delivers a singular set featuring a collection of more than 130 live, uncut performances from 1972-1980 – many not seen since their original broadcast!

All-time classic soul hits in The Soul of The Midnight Special include love songs like “Betcha by Golly, Wow” by the Stylistics and “You’re The Best Thing That Ever Happened To Me” by Gladys Knight and The Pips and dance grooves like Sly & the Family Stone’s “Dance to the Music,” Ohio Players’ “Fire,” and Chic’s “Good Times.” Also included are chart toppers and fan favorites such as “Back Stabbers” by the O’Jays, “Tired of Being Alone” by Al Green, “Could It Be I’m Falling in Love” by Spinners, “Lean on Me” by Bill Withers, “The Love I Lost” by Harold Melvin and the Blue Notes, “I Want to Take You Higher” by Sly & the Family Stone, “Shining Star” by Earth, Wind & Fire, “I’ve Got Love on My Mind” by Natalie Cole, “Just to Be Close to You” by Commodores, “I’ve Got to Use My Imagination” by Gladys Knight & the Pips, “You’ll Never Find Another Love Like Mine” by Lou Rawls, “Special Lady” by Ray, Goodman & Brown, and “Something He Can Feel” by Aretha Franklin.

In addition, Time Life is including a bonus DVD featuring “The Midnight Special Presents Marvin Gaye In Concert From The Atlantic Stadium,” a rare, historic live concert performance filmed exclusively for The Midnight Special in 1974 and available for the very first time anywhere. Also included in this completist’s set are 18 Bonus Interviews with top soul stars including The O’Jays, Gladys Knight, Bobby Womack, Patti LaBelle, George Benson, James Brown, Lou Rawls, Teddy Pendergrass, Quincy Jones and more, along with a collectible 40-page book, jam-packed with archival photos and stories about the stars.

Series creator Mike McMahan, writer and executive producer of “Rick and Morty”, takes you where no Star Trek series has gone before – to the lower decks! Join rule-breaker Beckett Mariner, aspiring captain Brad Boimler, rookie D’Vana Tendi and part-Cyborg Sam Rutherford as they attempt to navigate the most mysterious corners of our universe with very little experience – and even less authority. Star Trek: Lower Decks Season 1 features nearly 2 hours of exclusive special features and includes guest appearances by Paul Scheer (“The League”), Jonathan Frakes (“Star Trek: The Next Generation”), Marina Sirtis (“Star Trek: The Next Generation”) and more!

“Muhammad Ali,” the newest project from the master documentarian, Ken Burns, follows the life of one of the most consequential men of the 20th century. The film was directed by Ken Burns and co-directed and written by Sarah Burns and David McMahon. The docuseries highlights all the reasons why the world fell in love with Muhammad Ali and paints an in-depth portrait of the global icon.

The series delves into the heavyweight boxing champion who captivated billions with his combination of speed, agility, and power in the ring, and his charm, wit, and outspokenness outside of it. Born Cassius Clay, Jr., Ali rose from boxing-amateur to Olympic gold medalist and heavyweight champion, just as he had promised he would at the age of twelve. He wrote his own rules in the ring and in his life infuriating his critics, baffling his opponents, and riveting millions of fans. He spoke his mind and stood on principle, staying true to his Islamic faith, and refusing induction into the U.S. Army, even when it cost him his livelihood. Banished for his beliefs, he returned to boxing an underdog, reclaimed his title twice, and became one of the most famous men on Earth.

“Muhammad Ali” has a run time of approximately 480 minutes on 4 discs.

Nick Jr: The Night Before Christmas

With Christmas season right around the corner, fan-favorite Nick Jr. characters are ready to help celebrate and spread holiday cheer in the brand-new DVD release Nick Jr.: The Night Before Christmas! The DVD includes Christmas-themed episodes from PAW Patrol, Baby Shark’s Big Show!, Blue’s Clues & You!, Bubble Guppies, and Blaze and the Monster Machines. Preschoolers and their families will get to meet Santa, learn new holiday traditions, and celebrate the joyous holiday with their favorite characters. Nick Jr.: The Night Before Christmas is the perfect stocking stuffer for any Nick Jr. fan!

Nick Jr.: The Night Before Christmas will be available on DVD for the suggested retail price of $10.99, just in time for holiday gifting!

The Best of Cher

Some stars are beautiful, some stars are talented, a precious few are icons, and only one is … CHER. From the sequined ‘60s to the rocking ‘90s and beyond, no one has kept delighting us, surprising us, and entertaining us like Cher. And she’s not done yet! This March, Time Life brings fans a remarkable collection of highlights from Cher’s unique career with THE BEST OF CHER (5 Disc Set), available for the very first time at retail!  The inimitable multi-hyphenate superstar continues to shine brightly and this spectacular 5-disc set ($45.99srp), packed with unforgettable music, classic comedy and fabulous outfits, includes:

Lincoln Loud and his family return once again in The Loud House: Cooked! – Season 3, Volume 2 DVD! In the Emmy Award-winning Animated Series, the third season of The Loud House sees the Loud kids helping their father with his new restaurant, Luna entering a song-writing contest, Lori and Bobby bringing their crazy families together for the first time on Thanksgiving dinner, and much more! The Loud House: Cooked! – Season 3, Volume 2 will be available on DVD for the suggested retail price of $13.99.

Clarice is a deep dive into the untold personal story of FBI Agent Clarice Starling as she returns to the field in 1993, one year after the events of The Silence of the Lambs. Brilliant and vulnerable, Clarice’s bravery gives her an inner light that draws monsters and madmen to her. However, her complex psychological makeup that comes from a challenging childhood empowers her to begin to find her voice while working in a man’s world, as well as escape the family secrets that have haunted her throughout her life.

Get Clarice Season One

“All Creatures Great and Small” follows the exciting adventures of a veterinarian in the 1930s in Yorkshire, England. Based on the beloved autobiographical books by James Herriot, the series has quickly become a fan favorite, and will be back for a second season.

In 1937, when James Herriot was fresh out of Glasgow Veterinary College, he followed his dream to become a vet in the magnificent Yorkshire Dales, one of England’s most beloved and beautiful landscapes. He soon discovers that treating the animals is as much about treating their owners, and the Dales’ farmers are a tough crowd to please. At Skeldale House, James gets to know his newly formed dysfunctional family. The chaotic and erratic boss Siegfried Farnon, his wayward brother Tristan, and the shrewd Mrs. Hall, who is endlessly steering the ship. When local beauty Helen Alderson attracts James’s attention, he finds another, more enduring reason to stay in the Dales.

Get ready to experience greatness with THE ULTIMATE RICHARD PRYOR COLLECTION: UNCENSORED. Featuring all of Pryor’s most memorable stand-up and television performances together in one collection for the very first time, the 13-disc collector’s set ($99.95srp) contains more than 26 incredible hours of comedy. The groundbreaking stand-up, the mesmerizing TV appearances, the NBC show that was too hot for TV, and so much more. Capturing the full scope of Pryor’s groundbreaking, rule-bashing career, it’s available exclusively at TimeLife.com/Richard Pryor

Raw, sometimes shocking and always thrilling, Pryor — a once-in-a-generation innovator — pushed the envelope and was almost single-handly responsible for the comedy evolution that continues to this day. He won an Emmy®, five Grammys®, was the recipient of the very first Mark Twain Prize for American Humor (1998) and in 2017, Rolling Stone ranked him #1 on its list of the 50 best stand-up comics of all time. There has simply never been a comedian like him: totally genius and outrageously funny, and that’s on full display in this superlative set, which features: