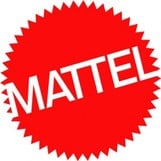 I was sent some fantastic products to review by Mattel just last week. They sent me three die cast characters from the Cars 2 movie, including Petrov Trunkov, Shu Todoroki and Miguel Camino.

We have big fans of the movies in our family, and we have a little gear head in the family so this was a fantastic review. They sent me such a great bundle of goodies to review I split it into two sections.

First, the die cast cars. I loved the detail on the cars. Take Petrov for example, he’s got the rust and dings on him. The details are amazing! They look just like the characters from the movie.

But your kids, will love that – but you know they’ll want to play with them. So how about that – how do they move? Smooth! There is no drag, just a smooth ride, they turn on a dime.  If your kids don’t like them for the details they will like play time they will have with them! 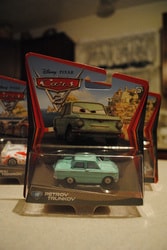 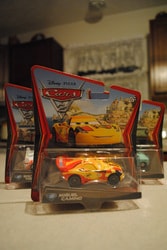 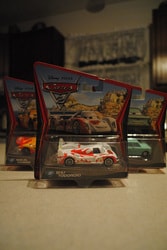 If the die cast cars weren’t a great enough product to review – they also sent me something else. I honestly, think this is one of the greatest toys I’ve ever seen. So what was the other product they sent? McQueen Alive!

I shot a short video to show you all of the great things the toy does – please keep in mind this is marked for ages 3 and up. (Sorry – no tripod used in the filming of this review).