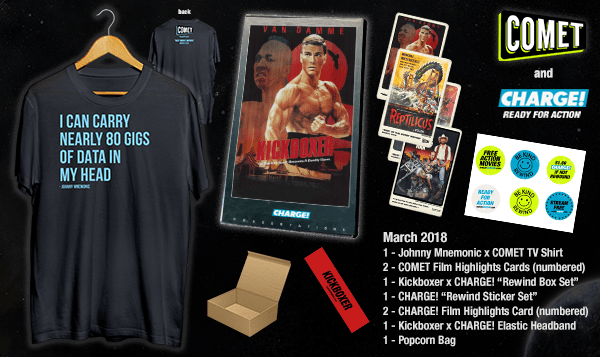 Comet TV, we know them and love them by now for showing the best and worst Sci Fi and horror movies and shows out there. But now we have Charge to add action shows to our streaming channels. This month we’ve got our own goodie box from both channels filled with a ton of goodies and we’re giving one of you one of these great boxes.

Check out everything in the March box in our unboxing video below and enter to win a box of your own! Be sure to visit the Youtube video and comment there too for extra entries for your chance to win!

Check out the Comet TV “BEST WORST MOVIES” in March:

We’re rolling out the red carpet for some of the best worst movies on planet Earth. They’re so bad… they’re awesome. Catch films like …

Cyberpunk might be all the rage right now, but Johnny Mnemonic was doing it before it was cool. Keanu Reeves stars as a data courier who traffics top secret information via an implant in his brain. Sounds cool, right? Not when that data ends up acting like a virus that could kill you dead if you don’t get the passwords in time.

Stargate Universe
Monday-Friday at 2/1C & 10/9C
Unlock the secrets of the ninth chevron with the boldest show in the Stargate franchise’s illustrious history. SGU features stunning visuals, a complex storyline, and all the gate-hopping action you could possibly need. So, what are you waiting for? Board the Destiny and join COMET for the adventure.

CHARGE! punches it’s way into our lives with an awesome Kickboxer marathon!

All five films will be shown Monday–Friday, March 26-30 at 6/5C – including the original Van Damme movie that started it all!

Revisit a classic. The British ultra suave spy series The Avengers is sleuthing it’s way onto CHARGE! with back to back episodes Monday through Friday at 1:30/12:30C.

What can you Win? One Reader will win The Comet TV and Charge! March Pack:

How Can You Win?
Enter to win with the form below. Let us know about your latest sighting, abduction or let us know what you’d like to see on COMET? or Which Kickboxer film is your favorite? If you do not do this entry – you will not win! So make sure you leave a comment and then enter using the form below!