The holiday season can be hard for so many reasons, but one of them is always dealing with the family. In a fun new holiday movie I’ll Be Next Door for Christmas, we get to see how the family part of the holiday unfolds in hilarious new ways. To celebrate the release of the film on digital, we have a fun printable activity to make your own reindeer bat ornaments for your tree this year! Just click on the image above to get the PDF instructions.

Experience the holiday season in a whole new way when I’ll Be Next Door for Christmas arrives on Digital December 4. Starring Juliette Angelo (TV’s “Mad Men”), Beth Littleford (TV’s “The Daily Show”), Jonathan Mangum (TV’s “Let’s Make a Deal”), Nicole Sullivan (TV’s “MADtv”, “The King of Queens”), and the absolutely adorable feline sensation Lil BUB (Nine Lives), the film is a heartwarming comedy that reminds viewers that Christmas is all about spending time with family (even if they drive you crazy). The world’s first Christmas movie to use investment crowdfunding successfully, I’ll Be Next Door for Christmas is available now!

Get your copy of I’ll be Next Door for Christmas to enjoy with your family!

About I’ll be Next Door For Christmas: 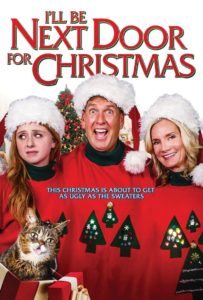 I’ll Be Next Door For Christmas is a warmhearted, upbeat comedy feature film about a family that’s crazy for Christmas. Except for the 16-year-old daughter – her family’s over-the-top Christmas celebrations have made her life miserable. When her out-of-state boyfriend decides to visit at Christmas, she’s determined to spare him her family’s Christmas craziness, so she hires actors to play her parents and stages a fake Christmas dinner in the empty house next door. What could possibly go wrong?