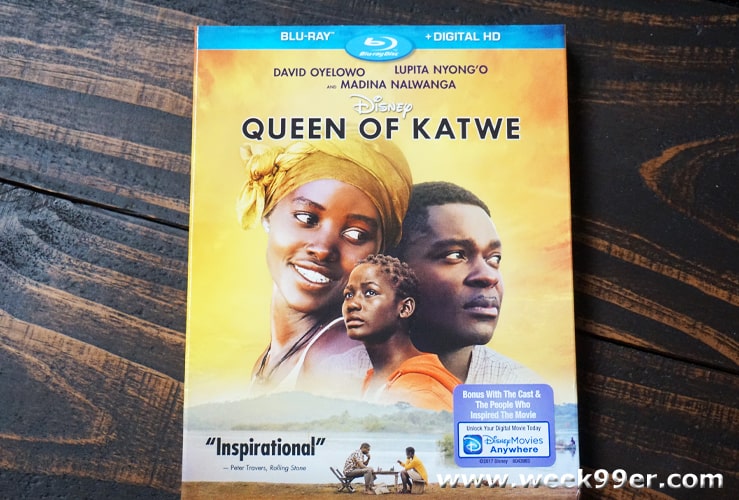 Have you ever seen a movie in the theater and then counted the days until it was released so you can own it? It’s been a long time since  I’ve had a movie come out that I wanted to own right away but Queen of Katwe was just one of those movies. The story is captivating, it’s uplifting and empowering and all of this from a “sports” movie. It’s not a movie that is drenched in sports or even chess, but one that anyone can watch and find inspirational. Queen of Katwe was the first movie in years that had me crying in theaters, and the story is exceptionally moving.

Queen of Katwe follows Phiona, a young girl in Uganda who not only learns how to play chess, but masters the game. Her competitive playing helps provide her and her family opportunities to better their lives. The movie takes you from her beginnings and where the journey takes her, but you get to experience this real life journey with her. Based on a true story, Queen of Katwe is a movie that you’ll want to watch and experience again.

Queen of Katwe is now available on digital HD and can be pre-ordered on Blu-ray and DVD for it’s January 31st release. Check out more about the movie from the cast as well as more about the home release below.

Lupita And The Children

About Queen of Katwe at Home Release: 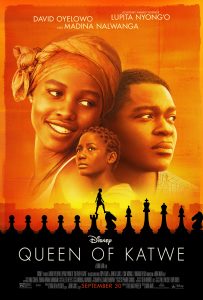 Home audiences will cheer for Disney’s “Queen of Katwe,” the inspirational journey of a young girl from the streets of Uganda to world-class chess player, which has earned widespread critical acclaim, including a 93% Certified Fresh critics consensus on Rotten Tomatoes. The triumphant film, which is based on a true story, arrives home on Digital HD and Disney Movies Anywhere (DMA) on Jan. 10 and on Blu-ray™, DVD and On-Demand on Jan. 31.

The in-home release of “Queen of Katwe” takes viewers behind-the-scenes with filmmakers, as well as the cast and their real-life counterparts, through extensive bonus features, including a three-part documentary highlighting the amazing personal stories behind the film; audio commentary by director Mira Nair (“Salaam Bombay!,” “Mississippi Masala,” “Monsoon Wedding”); a short film by Nair depicting the life of Robert Katende; in-studio access to 15-time GRAMMY® Award-winning recording artist Alicia Keys during the creation of her new original song “Back to Life;” deleted scenes; and more.

“Queen of Katwe” is based on the vibrant true story of a young girl (Madina Nalwanga) from the streets of Uganda whose world changes when she is introduced to the game of chess, and, as a result of the support she receives from her family and community, is instilled with the confidence and determination she needs to pursue her dream of becoming an international chess champion. It is a remarkable story of perseverance against all odds that will leave viewers feeling humbled and inspired.  According to director Mira Nair, “The triumph of the human spirit is not to weep for what we don’t have but to focus on what we do have and allow that to take us to a place we never imagined possible.”

Directed by Mira Nair from a screenplay by William Wheeler, “Queen of Katwe” is produced by Lydia Dean Pilcher, p.g.a., and John Carls, p.g.a., with Will Weiske and Troy Buder serving as executive producers. The film features a cutting-edge Afrobeat soundtrack curated by the Ugandan rapper Young Cardamom (aka Zohran Kwame Mamdani); Alex Heffes’ buoyant orchestral score highlighting traditional Ugandan instruments; and “Back to Life,” performed by Alicia Keys, written by Keys, Carlo Montagnese and Billy Walsh, and produced by Illangelo and Keys.