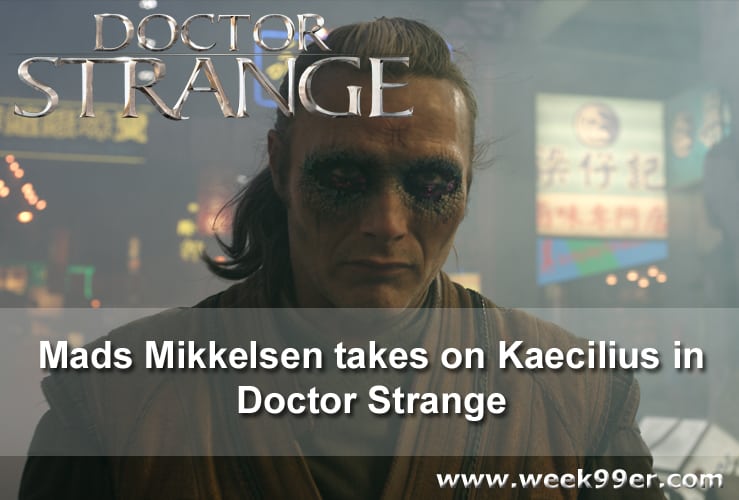 Fans of Mads Mikkelsen know him best from his villain roles, at least here in the United States. The actor has a variety of roles internationally, but in his latest big screen role here he brings Kaecilius to life in Doctor Strange. The character who, while we see him as a bad guy, believe’s on the right side of the battle and history. We were able to sit down with Mads and ask him about his latest role and his takes on being the bad guy once again.

Since we’re use to seeing Mads in the role of the bad guy, we wondered if that was a choice, typecasting or something that just happened. “In terms of playing characters, I think that any good hero, or any good villain has to be interesting. Having both sides of the coin. And I think that’s exactly what Marvel always does, right?”

Kaecilius is seen throughout the film, and actually has some physically demanding roles. We wondered what Mikkelsen’s favorite scene was to shoot. “There were quite a few scenes that I loved shooting, but the great encounter I have with Benedict, which starts out with a long fight and ends up with me making the speech. I mean, he’s onto something. He has a point. I thought that, that was a brilliant sequence to do.

“I think we did that fight sequence for three weeks. It’s not two hours, it’s, it’s probably eight or 10 hours, you know, fighting each other every day. And you do hurt the next day. This is a big sequence. One thing is to do stunts and we can do that in a certain amount of time. But if you have things crashing, it takes time to set it up, and make sure that there’s no risk, and everybody’s fine.  And if you screw it up once, it takes, it takes three hours to rebuild it.

“We had a lot of preparation and from the very beginning with the stunt guys.We were taught some basic martial arts, some moves that will go again and again in the film. And having fairly small people teaching us bigger people to do things on the floor like that. But, but I think we did our best.”

You will notice that Kaecilius has a very distinct look in the film that is developed early in the story. Mikkelsen explained how that came to be.  “I mean, we went to do some of the tests and we were doing the makeup. I insisted on, bringing the costume and having it on when we do the makeup, just to see how it looks together. And they were spot on. We were sitting in there for hours trying out this makeup, and I was like, “Oh god, do I really wanna do this every day?”  But then it turned out so fantastic, I was like, “Yeah, that’s it. Three hours every day, we’ll do it. It’s worth it, really.

Mikkelsen is now not only in the Star Wars Universe but now is a big character in the Marvel Universe, we wondered what he felt about being in such major franchises. “It seems appropriate. No, it feels fantastic. I mean as a Dane who started out acting 20 years ago back home, a late starter, I never imagined that I would work in America at all. Let alone that I would work in a Marvel film. So it feels as if I’m a very fortunate person.”

Many fans know Mikklesen from his villain role from Hannibal. We wondered if he felt that the role and fame had started to typecast him. ” Well, I am to a degree over here. I mean, but if the alternative is not to work over here, I’ll take the villain. And luckily I do a lot of different things back home in Europe, so I’m not starving in the sense of like, why am I always the villain? If it’s this kind of villain, I’ll take it any day.”

But how does one prepare himself for being a bad guy? Is there any special technique? Was there anyone that inspires Mikkelsen’s bad guy roles?  “Well, it’s obviously it’s in the script somewhere.And you lean into the script. For me the script is always the most important tool and from there I’ll develop the character with the director, of course. Some of my favorite actors have been playing villains as well. I mean, Christopher Walken is a hero of mine, and I think he has the ability to, to somehow make the villains likable. Whether it’s his personality, or whether it’s that he chose a part that was dualistic written so it makes sense, I don’t know. It’s just that some of the great actors can do that. I mean, the joker is a fantastic example. We love to hate him, you know?”

Besides being a bad guy, is there a type of role that Mikkelsen would like to play? “No. I don’t have , a tiny Hamlet in me. Or, I think that it’s been done numerous time to perfection. The things I’m being proposed to do, if I like them a lot, and I can tell that there’s a vision from the director, that vision becomes my vision, and that becomes my dream role at that second.” 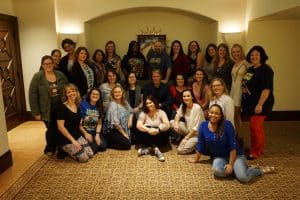 Mikkelsen has a huge devoted fan base on social media and w wondered what his is influence is when he takes on any role. “As I said before, the script is the bible. This is where the character, he is in there somewhere together with the director. We can approach it different ways. I think inspiration wise, I mean, like all good actors in the world, like all good religious leaders, all political leaders,they have an ability to speak to the people in the way that they understand.

“Let’s say Jonestown, right? But if you look at Jones today, you go, “Wow, that’s bad karma. That’s just terrible. How could people buy into that?” And if you look at this character with his mask on, you would also say that. But he has a point. He’s saying stuff that makes sense to a degree. He wants to make a the world a better place, just has a different means to get there. But he still have the goal of making the world a better place. So I think that was the approach, a certain kind of religious leader, when we did it. Obviously he’s not only talking, he’s also being quite physical. Uh. But, as all good dictators, it takes some sacrifices, right?”

Viewers will notice that Kaecilius’ outfit is a bit heavy and draping in the film, we asked if this caused any problems during filming. “It was quite heavy. Not crazy heavy, but it was light. Obviously, we just got in shape. Every day, the more you were wearing it, the stronger you got. It felt feather light in the end of the. But in the beginning it was like, seriously? Am I gonna jump up there now in this? Like, wow. But the more we worked out with it, the more it makes sense.”

Most actors have a ritual that help them in get in the mindset for their part, we wondered what Mikkelsen’s was. “It varies from the characters I’m playing, depending on what kind of energy they have, and what kind of scene they’re approaching. I will warm up. It’s not a specific ritual, but I will try to get into that energy by myself, somewhere in the corner. If it’s a different kind of scene where everybody’s having a good time, I might spend a lot of time with the actors before we do it. But, but I often walk around in a corner somewhere.” 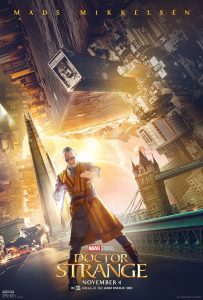