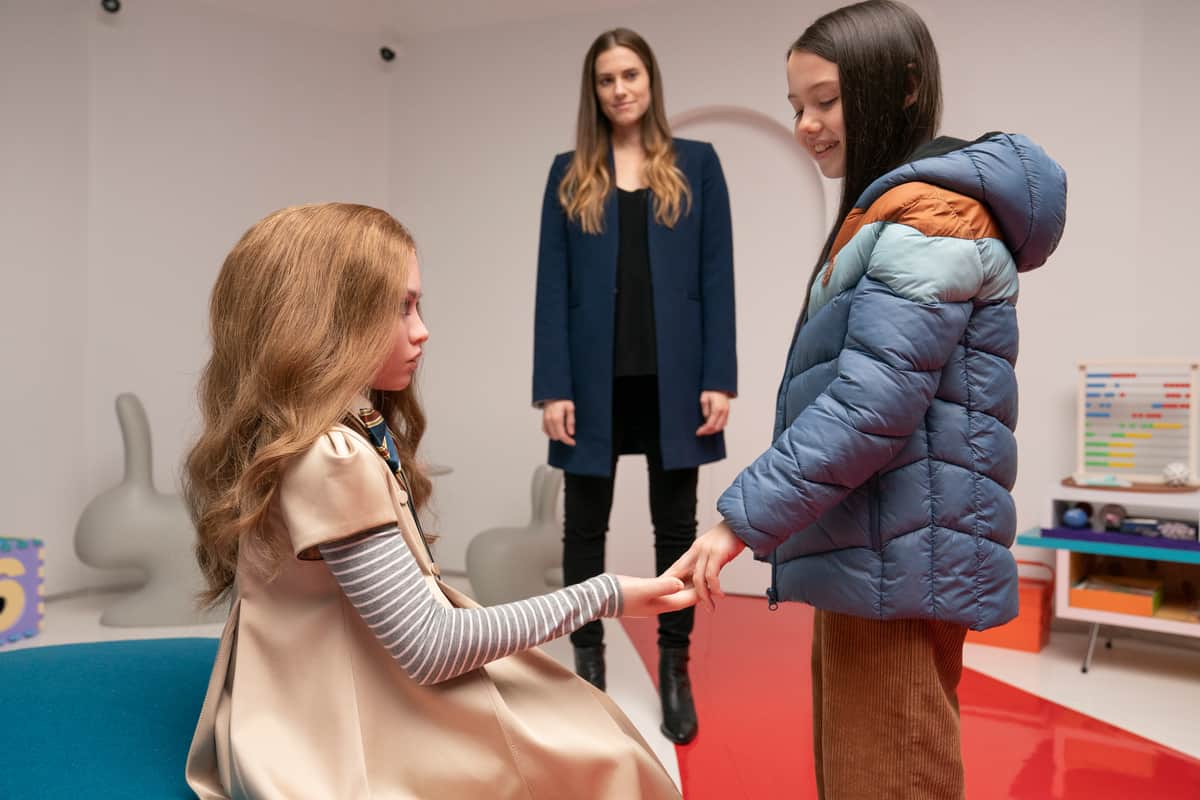 Do you remember your favorite toy growing up? Most likely it wasn’t loaded with technology or one that would go on a murderous rampage. But M3GAN, the new horror/sci-fi film from Blum House and Universal Pictures is going to change how you look at toys and their impact on the lives around you.

M3GAN follows the story of Cady, a young girl who is orphaned and ends up living with her aunt Gemma, a toy designer for one of the most famous toy brands. While Cady is grieving the loss of her parents, Gemma decides to use her unfinished project M3GAN to help her – and essentially fill in for her in the parental role. What Gemma didn’t expect is, that in her hurry to finish M3GAN – an android that will be the most expensive toy on the market, she forgot essential coding and rules to actually control her. The result is a robot that is dedicated to Cady, the child she is paired with, and will do anything to protect her at any cost.

While M3GAN is supposed to be a sci-fi horror film, the movie will have you laughing throughout the whole thing. From absurd moments, to semi-creepy robotic actions that you know aren’t going to end well. It isn’t a perfect film but holds its own while offering you a good time at the theater.

One of the flaws in the movie is none of the characters are really likable. Cady, obviously grieving her parents, is a brooding child. But even before their loss, she seems to be a bit of a brat. While her reliance on M3GAN almost gets to be an addiction, she has to be given some slack for her young age. Cady is played by Violet McGraw, who takes on a huge emotional range for an actress her age – and does it well.

Now, Gemma (played by Allison Williams) barely has a redemptive arch in her storyline. She never wanted to be a parent and is suddenly a full-time caregiver to a child she doesn’t know how to help. And while she should be grieving the loss of her sister, and trying to focus on her niece – she just carries on her with her work projects and creates a proxy for lack of parenting skills. Add in a rude neighbor, a therapist that doesn’t even make an effort, and a workplace that is probably one of the most accurate depictions of one of the more modern business models depicted on the screen – it’s hard to find anyone you would root for in the story.

In the end, you find yourself siding with M3GAN’s decisions. Sure, it may be her lack of programming and her adapting to change her understanding of the world around her but it makes sense. Would we go after the little boy who’s being a bully? No, but do we cheer on M3GAN as she does it – yes. The movie has more laughs than anything throughout it.

The movie does seem to have a bit of a warning at its depths as well. From the reliance on technology and how it can literally control our lives, but also its impact on children. The lack of control Gemma has on Cady’s time with technology both figuratively and physically, and how much control and impact M3GAN has on her as a child. It’s an interesting perspective, even if it is to an extreme.

Even as someone who usually stays away from horror movies and the genre in general, I really enjoyed M3GAN. It seems to lean more towards the comedy horror niche and balances the scary well with the laughter. It’s not overly gory, it’s not super graphic or filled with jump scares. With minimal swearing throughout the movie, it firmly cements itself in the PG-13 rating and actually will be a fun movie for younger horror viewers, or people who don’t love to be scared. M3GAN seems to lean on the camp side of horror and is a fun movie from the beginning until the end.

M3GAN opens tonight in select theaters – and while it may not be spooky season, this is a great way to kick off the movies in the new year.

She’s more than just a toy. She’s part of the family. From the most prolific minds in horror – James Wan and Blumhouse – comes a fresh new face in terror. M3GAN is a marvel of artificial intelligence, a life-like doll programmed to be a child’s greatest companion and a parent’s greatest ally. Designed by brilliant toy-company roboticist Gemma, M3GAN can listen and watch and learn as she becomes friend and teacher, playmate and protector, for the child she is bonded to.