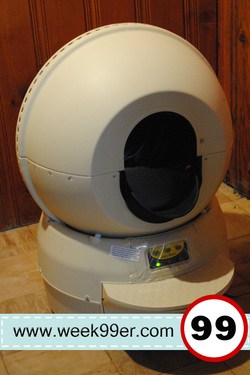 Our cats are spoiled. Not only do they have a year’s worth of food at any given time (and probably the same in treats) – they are now the proud owners of a Litter Robot!

What is a Litter Robot you might ask? It’s an automated litter box for the cats – and I think it’s pretty cool!

How does it work? You load it up with clumping litter, set the top on the track and plug it in. I was surprised at how easy it was to set up and get going.

Now why is it important to have a Litter Robot in our house? We have a crime spree going on… Two little criminals going on their own little crime spree! 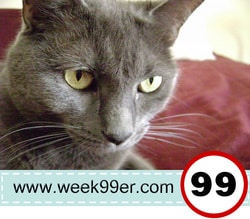 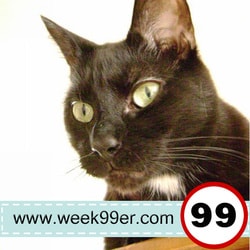 What do I mean they’re on a crime spree? The litter box has sat in the corner of the basement for the last several years. Between the hoovering over the edge and the sand kicking that area of the basement would be a total mess. I wind up mopping the basement every week.

Making sure the basement is clean, the litter box is clean and the basement is “smell free” is a full time job. And as soon as it warms up past 60 degrees we move down to the basement to keep the bills low. So within 20 feet of the foot of our bed is the litter box. Not the most ideal situation, but in an older house where air conditioning just leaks outside – we would rather keep our bills low. So I’m always cleaning this area to make sure it stays clean.

When I was setting up the Litter Robot, the first concern I had was the girls may not use it. We have had the rake power litter boxes in the past – only to have them break within a month. The cats used them, but weren’t thrilled with using them. But I took the pieces downstairs and started to set up the new Litter Robot. As I read the instructions and set it up, Godiva sat and watched it make it’s first cycle. She sat right next to me and cocked her head instead of running away.

The first night the Litter Robot was set up, I stayed up seeing if we would hear them use it. I eventually fell asleep, and we were both startled awake at 5:30 by the Litter Robot going through a cleaning cycle. I laughed a little knowing that they had actually used it and fell back asleep.

With the exception of a couple surprises, they have both been using the Litter Robot daily! The lip extender catches any mess caused by the hovering and there is very little sand on the floor! The area stays clean and relatively smell free – so less work and cleaning for me (which makes me even happier). I suspect that the couple surprises I’ve found in the vicinity were from someone needing to use the box while it was going through a cycle. Thankfully they were easy to pick up, toss in the Litter Robot and push a button so it went through a cycle and took care of the mess.

I set the Litter Robot up last Wednesday and I haven’t had to change the litter pan yet (it’s been over a week!) I keep walking up and checking to see if the bin is full, or if there is still enough litter inside and I am happily surprised each time! It’s self contained and super easy to refill and clean. I think the Litter Robot might be a cat owner’s best friend – it takes the gross part of owning pets away. Just keep in mind it’s for cats between 5 and 15 lbs.

Both of the cats love that they always have a clean litter box – and I love how easy it is for us to use! Now, it hasn’t completely stopped the crime wave, I have still found litter on the floor outside (that darn Sand Kicker is at it again!) But the overall mess is gone -and clean up is so easy!