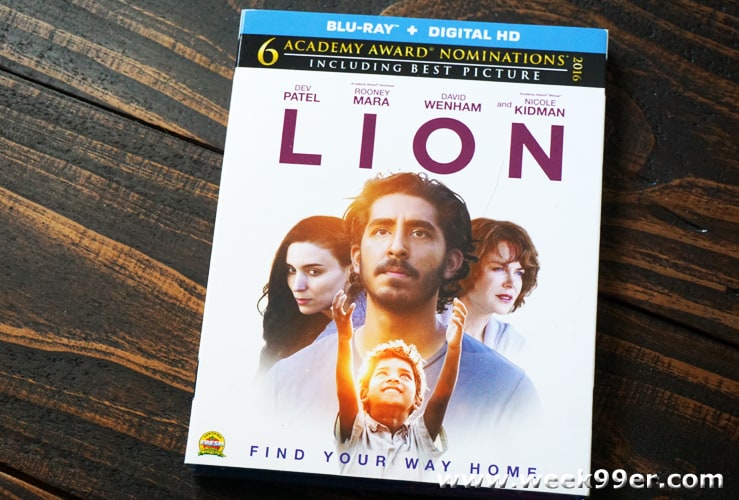 Few movies moved us last year as much as Lion did. The story of a lost boy who ends up thousands of miles from home and finds a new family, on the quest to find where he came from and who he is. Lion is an amazing movie that grabs you by the heart strings, and makes you appreciate both family and how far we’ve all come.

Lion is based on a true story who got lost as a child, and was brought in by another family. While happy in his life, he wonders about the life he lost before he was adopted and his family that he left behind. Armed with Google Earth he goes on an adventure that not only changes who he is, but helps him find his true self.

We were riveted by Lion, and we’re happy to bring this movie home. Besides the main feature the Lion Blu-Ray also includes hours of special features including:

Get swept up by Lion when you get your copy on Blu-Ray, DVD or Digital HD. You can get Lion today online or in stores everywhere.

LION follows five-year-old Saroo (Sunny Pawar) who gets lost on a train traveling away from his home and family. Frightened and bewildered, he ends up thousands of miles away, in chaotic Kolkata. Somehow he survives living on the streets, escaping all sorts of terrors and close calls in the process, before ending up in an orphanage that is itself not exactly a safe haven. Eventually Saroo is adopted by an Australian couple (Nicole Kidman and David Wenham), and finds love and security as he grows up in Hobart. As an adult, not wanting to hurt his adoptive parents’ feelings, Saroo (Dev Patel) suppresses his past, his emotional need for reunification and his hope of ever finding his lost mother and brother. But a chance meeting with some fellow Indians reawakens his buried yearning. Armed with only a handful of memories, his unwavering determination, and a revolutionary technology known as Google Earth, Saroo sets out to find his lost family and finally return to his first home.

Inspired by a true story, LION shows us that even if we lose our way we should never lose hope. LION is “majestic and moving” Pete Hammond.

Lion is now available on Blu-Ray, DVD and Digital HD. It has a total run time on 118 minutes and is rated PG-13.