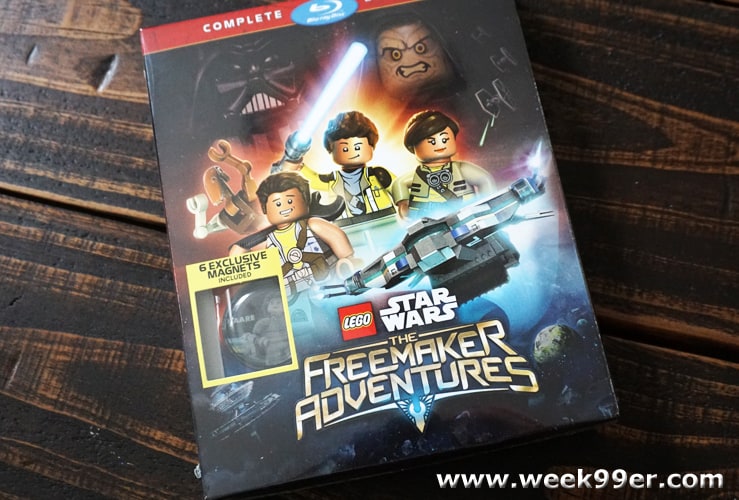 Disney sent us a copy of LEGO Star Wars: The Freemaker Adventures Season One on blu-ray – the complete first season of the show that kids and adults are absolutely loving. Our blu-ray set came with a set of 6 character magnets and is loaded with fun and adventures. While the LEGO Star Wars movies and games have several characters or creatures we’d expect to see in the Star Wars universe, the LEGO versions take it in a bit of a different direction. Watch as characters snap things together, parts pop off and everything is built from our favorite building blocks.

LEGO Star Wars: The Freemaker is fun to watch with your children, but is something that fans of the Star Wars universe will love to watch. Get ready to laugh at the Freemaker Adventures and enjoy the episode with an underlining story of family and friendship.

About Lego Star Wars: The Freemaker Adventures Season One:

Join the Freemakers in their spectacular first season of LEGO Star WarsAdventures.

Taking place between the events of The Empire Strikes Back and Return of the Jedi, these new adventures follow a family of scavengers who build and sell starships from battle debris strewn throughout the galaxy. When their youngest discovers a natural connection with the Force through an ancient artifact – the Kyber Saber –he and his family are thrown into an epic struggle against the Empire to restore peace and freedom to the galaxy. The Freemakers explore new worlds, meet new and familiar characters and discover the strength of family. Relive all 13 action-packed episodes in LEGO Star Wars: The Freemaker Adventures Season One.

Lego Star Wars: The Freemaker Adventures Season One is available now on Blu-Ray and DVD! It has a total run time of 299 minutes and is rated TV-Y7.