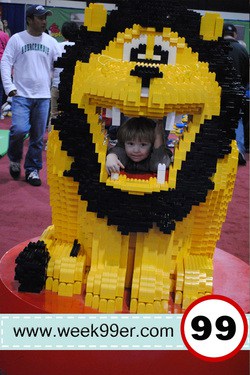 Something amazing happened this weekend in metro-Detroit, actually it’s still happening! LEGO Kidsfest took over the Suburban Collection Showplace in Novi and opened the doors to kids of all ages!

If you’re like me, you grew up playing with LEGO bricks, they let your imagination grow – you could make people, animals and buildings out of the bricks. Some actually grow up to become LEGO master builders – and that’s where the imagination really comes in!

This was the first time LEGO Kidsfest came to Detroit – and we showed them just how much we love their products – we sold out every session! 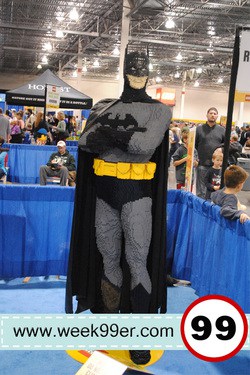 LEGO Kidsfest isn’t just about the LEGO bricks and playing (although that is a big part of it). You can play games, do competitions and even see the Master Builders at work. One of my favorite parts was the full size statues made out of LEGO bricks throughout the conference hall. You could see Batman (actually two versions!), Lightning McQueen, Jack Sparrow, Indiana Jones, Sponge Bob and many more of your favorite characters. Each built completely of LEGO bricks and life size!

Now for kids this is pretty cool, but you could watch the adults trying to figure out how they were assembled and put together. Each one done from LEGO bricks, it’s amazing the results that can be achieved from bricks that you usually think of as square or rectangles! 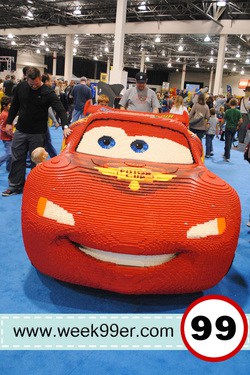 The show was packed when we arrived, and it was a bit hard to get clear pictures of some items, or get to certain exhibits. But after a few trips around the show we were able to do everything we wanted.

LEGO Kidsfest was unlike any other show I had been to before, they encourage you to build and play while you’re there. You could see adults and children working together in the different piles of LEGO bricks. There were also different stations of just Monochromatic bricks that you could create in. You could see an area full of pink houses, or just blue buildings while kids and adults built whatever they could imagine together. 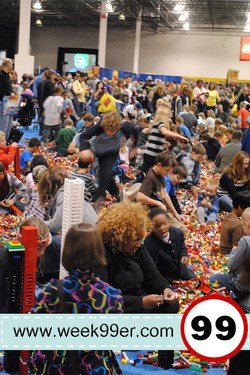 Some of the busiest areas were the brick piles, they had one full of LEGO bricks and another full of DUPLO blocks for the smaller kids. You could sit for as long as you wanted and build anything you wanted – you just couldn’t take it out of the show!

Due to the amount of people there, kids did have to be patient and wait their turn to play with certain toys. We had this problem with the train set since my nephew eyes locked on it part way through the show. He did get his turn and eventually we had to pull him away so other kids could get their turn. That was probably the biggest hit for him – that and the Bissell Vacuums…

Yes, you read that right – vacuums were a hit! Want a fun way to get your kids to clean the house? Show them how to use the push Bissell vacuums and race to pick up their LEGO Bricks. Kids were running and having a great time cleaning! That might have been one of the more amazing parts of the event! Not only was it a hit with the kids – the Parents loved it too!

We had a fantastic time at LEGO Kidsfest, and all left tired and inspired by some of the amazing designs. It was neat to see what can be built from LEGO bricks, but it was even cooler to see kids of all ages playing together. You could tell the LEGO lovers who brought their kids to introduce a new generation to LEGO bricks and the fun you can have with them!

LEGO Kidsfest sold out here in Detroit, but hopefully they’ll be making it back next year! This is something everyone should experience at least once!