Music has always been big in my life, from growing up listening to everything my dad had on vinyl, 8 tracks, reel to reel, tapes and CDs, to learning to play music myself. My music collection ranges from Mozart to Metallica and pretty much everything in between. I’d rather have music going than to sit in a quiet room. So when we were in Cleveland last month we were excited to tour the Rock and Roll Hall of Fame as their guests. 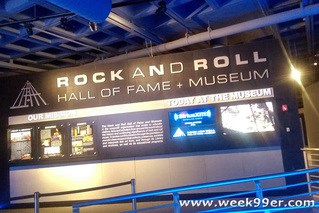 On the shore line of Lake Erie, the Rock and Roll Hall of Fame and Museum is in a glass pyramid building encased in metal. The building was designed by I. M. Pei, and has four different levels of spaces for exhibits. Combined with the outdoor plaza space there is over 150,000 square feet for events and more.

Inside the museum, you’ll find memorabilia, interactive exhibits and things you wouldn’t expect. You can find signatures of each inductee, videos and even slow down for a meal in the cafe. Slow down and enjoy each exhibit and you may be there all day.

From Elvis’ army uniform, Michael Jackson’s glove, Katy Perry’s lollipop dress, and even Janis Joplin’s Porsche – around each corner you’ll find something that has shaped music as we know it today. As you walk through the museum you start at the beginning of Rock and Roll and go through the opposition of the changing music movement. The majority of the museum is a collection of different items from major players in the music scene. You will find modern musicians in the same exhibit area as Jimi Hendrix and The Beatles, all are equally important in the shaping of music as it is today.

Rock and Roll has its roots in the Midwest, and specifically in Cleveland. Be sure to visit the Cleveland Rocks exhibit that highlights the bands that started to Rock and Roll movement as well as the fabulous bands from the Midwest region. We were happy to see bands we know from Detroit and even songs we grew up listening to. We had a great time exploring the Rock and Roll Hall of Fame, and were shocked at the amount of items that were actually there and you could see. It’s amazing seeing history we’ve only seen in black and white movies, as well as current musical moments in front of you.

For more information about the Rock and Roll Hall of Fame, visit their website for their current and changing special exhibits.