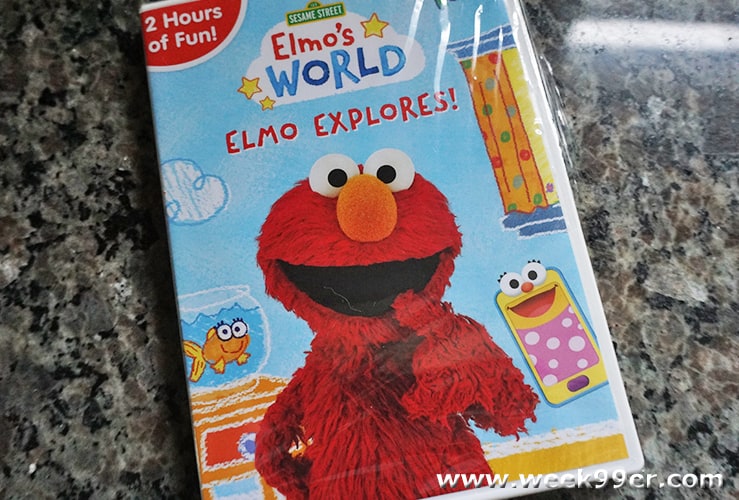 Explore the everyday world with everybody’s favorite furry red monster, Elmo, in the new DVD release of Sesame Street – Elmo’s World: Elmo Explores!, on October 2, 2018 from Shout! Factory and Sesame Workshop. Fans can now pre-order their copies on Amazon.com.
Elmo Explores! is a two-hour collection of Elmo’s World episodes, appearing for the first time on DVD. Using the power of his imagination, Sesame Street’s little red monster explores kid-friendly topics such as painting, cooking, and habitats from a child’s point of view. Joined by the hilarious Mr. Noodle, Smartie the Smartphone, and his pet goldfish Dorothy, Elmo asks questions that lead to fun discoveries. An age-appropriate launch pad for imagination and learning, Elmo’s World: Elmo Explores! indulges children’s natural sense of curiosity about the world around them.
Each engaging installment of this newly-reimagined Sesame Street segment presents young viewers with lessons to help them grow smarter, stronger, and kinder. Bonus features include two episodes of the uproariously silly Sesame Street spin-off The Furchester Hotel and three classic segments of the original Elmo’s World.
Elmo’s World: Elmo Explores!  is perfectly suited for curious preschoolers and for the generations of fans who continue to enjoy classic Sesame Streetsegments that were a vital part of their own childhoods.
Currently in its 48th season, Sesame Street is the longest-running program in children’s television and has received more Emmy Awards than any other show in television history.
Bonus Features:
The Furchester Hotel episodes The Count’s Vacation and Space Alien Partyare presented here on DVD for the first time in North America as bonus features. The Furchester Hotel is an “almost” world-class establishment run by a tight-knit family of cheerfully incompetent monsters. The proprietors are welcoming owner Funella Furchester, her dear and beleaguered husband Furgus Fuzz, their daughter, the unflappable Phoebe Furchester-Fuzz, and Isabel, the furriest front desk bell in the business. Cousin Elmo is on an extended visit and fascinated by all the hotel has to offer. Cookie Monster has landed his dream job as a room service and dining room waiter. The family bends over backwards, forwards, and sideways (occasionally tipping over) to be sure the needs of every guest are met because a Furchester never gives up! Animal, vegetable, and mineral alike flock to this hub of hospitality, where problem solving is part of the service.