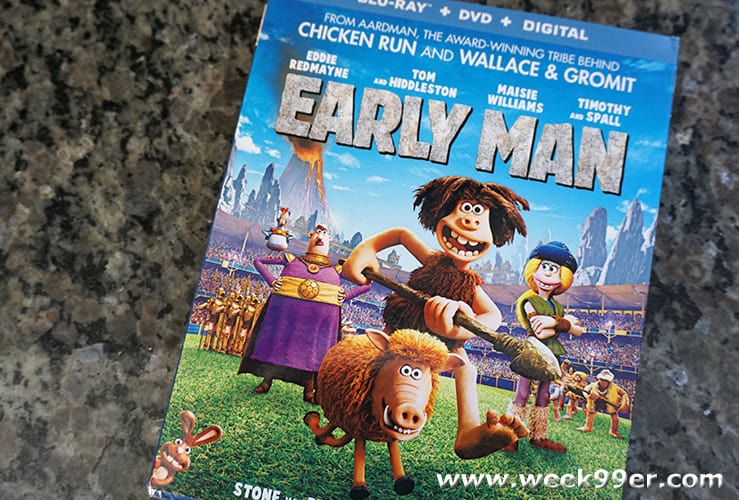 Cultures are about to clash and you’re about to laugh until your sides hurt with Liongate’s latest release of Early Man on Blu-Ray, DVD and Digital HD. With the story of cavemen fighting for their existence in a new world – all done in amazing claymation. From the same animators that bring us Shaun of the Sheep and Wallace and Gromit this new story is one that you will watch with the kids over and over again.

We’ve all been at a stage in our life where it seems the world is moving faster than we are. But what about going from the stone age to the bronze age? The difference in technology, culture and life styles is almost too much to handle for the hero Dug, until he decides to face it face on. With heartfelt moments and a bit of rude humor, you’ll be laughing throughout the whole movie and watching it again with your kids.

The movie is geared towards a younger audience, as most of the Aardman products are, however, the beautiful animation and familiar character designs (with great casting for their voices) will quickly make it one of your favorites too. Get your copy of Early Man now! Early Man has a total run time of 89 minutes and is rated PG!

Looking for more Early Man fun? Click the image below and download some great Early Man printable activity sheets that you can print out and use over and over again! 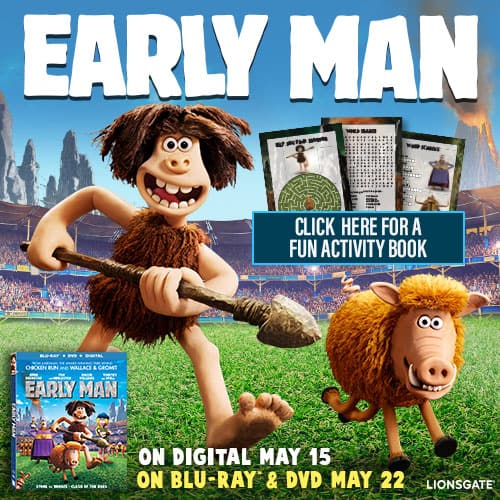 Meet the team that rocked the Stone Age when Early Man arrives on Digital May 15 and on Blu-ray™ Combo Pack (plus DVD and Digital), DVD, and On Demand on May 22 from Lionsgate. From Aardman, the award-winning tribe that brought you Wallace & Gromit, Chicken Run, and Shaun the Sheep Movie, this prehistoric romp tells the epic story of Dug the caveman and his goofy friends who challenge invaders to a game of soccer in order to win back their home. Perfect for the young and young-at-heart alike, the cheerful tale told in charming, well-crafted claymation is Certified Fresh™ on Rotten Tomatoes and is full of “abundant delights” (Ella Taylor, NPR). Starring in the film are Oscar®-winner Eddie Redmayne (Best Actor, The Theory of Everything, 2014; Fantastic Beasts and Where to Find Them), Tom Hiddleston (Thor: Ragnarok, Kong: Skull Island), Maisie Williams (TV’s “Game of Thrones”), as well as Timothy Spall (Sweeney Todd: The Demon Barber of Fleet Street, Harry Potter Franchise).

Set at the dawn of time, when prehistoric creatures roamed the Earth, Early Man tells the story of courageous caveman hero Dug (Eddie Redmayne) and his best friend, Hognob, as they unite their tribe against a mighty enemy — Lord Nooth (Tom Hiddleston) and his Bronze Age City — to save their home.

The animated world of Early Man has extensive special features including never-before-seen featurettes that reveal the love, passion, hard work, and magic that goes into creating an Aardman Studios animated film. Early Man will be available on Blu-ray Combo Pack and DVD for the suggested retail price of $24.99 and $29.99, respectively.