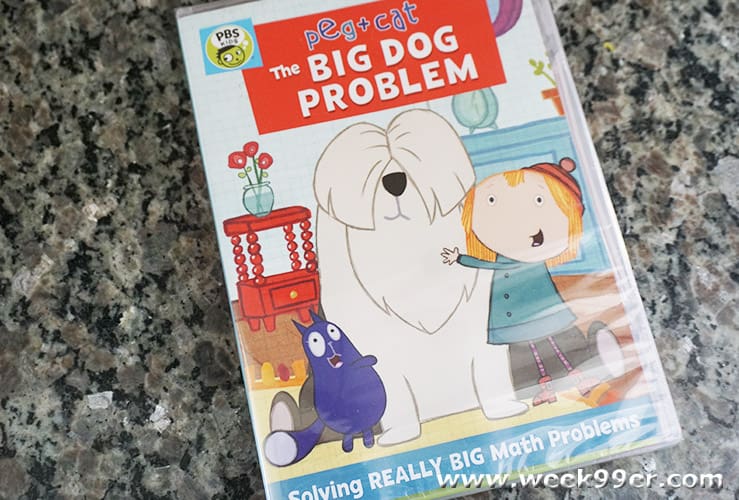 Math is one of those topics that can seem daunting at any age. But with the help of your friends, your kids can learn basic math problems with the fun new show Peg and Cat! Peg and Cat join together to use math to help save the day. Problem solving skills and math are the basics premise behind every episode and we couldn’t be happier to see this combination.

Just released was Peg + Cat: The Big Dog Problem, where our two heroes work together to once again save the day, but this time they meet a big new furry friend. With the Big Dog around, they’re having problems mailing their letters since their big new friend is blocking the way. This is the base for a couple episodes, but the new collection has four that pre-school aged kids will love.

In this program, Peg and Cat continue to use their math and problem solving skills to overcome challenges, go on adventures and make new friends! Peg + Cat The Big Dog Problem is now available everywhere on DVD!

PET + CAT highlights the adventures of the fearless Peg and Cat as they use math and problem-solving skills to overcome challenges and save the day. Since its launch on PBS KIDS in 2013, PEG + CAT has provided young viewers with new ways to learn the key skills that today’s kids need to navigate everyday life. In addition to math concepts, the series emphasizes resilience and perseverance.

In “PEG + CAT: THE BIG DOG PROBLEM,” Peg and Cat take on new experiences when they make a new friend, the Big Dog. When Pegand Cat need to mail some important letters in “The Big Dog Problem” episode, they find their path to the mailbox is blocked by a really bigdog. Then, in “The Three Friends Problem,” Peg and Cat are playing with their new friend the Big Dog when Cat suddenly becomes strangely quiet. Using a graph, Peg attempts to figure out what’s wrong with Cat. Other episodes included on this DVD are: “The Too BigDog Problem” and “Peg Meets Cat.”

With 20,000+ Facebook fans and six books already published PEG + CAT is on the move with these four adventures on the new DVD:

PEG + CAT is funded in part by the Corporation for Public Broadcasting (CPB) and the U.S. Department of Education through the Ready To Learn Initiative, a program that supports the development of innovative educational television and digital media targeted at preschool and early elementary schoolchildren and their families.

Grab Passes to an Early Screening of Paws of Fury: The Legend of Hank