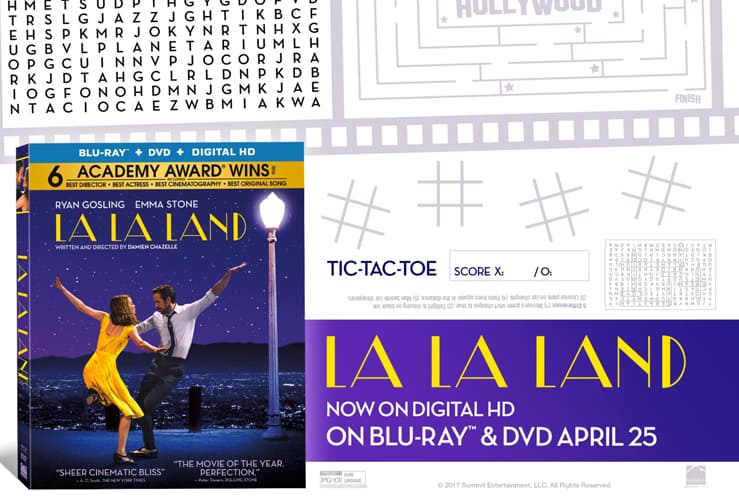 Normally when we share printable activity sheets they’re for kids, we have had a few that we (not so secretly) printed out and colored ourselves, but the ones we have today are perfect for us big kids! Lionsgate has released some amazing activity sheets and you can print them out for yourself or your next Girls Night. They’re being released for toe celebrate the Blu-ray release of La La Land on April 25, including sheet music, word finders and more that you and your friends can print out for a fun “Mom’s Night In” viewing party! 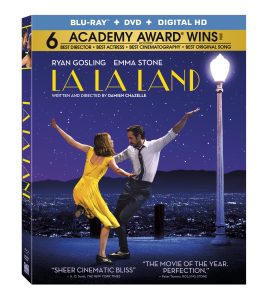 La La Land is more than the most acclaimed movie of the year — it’s a cinematic treasure for the ages that you’ll fall in love with again and again. Emma Stone and Ryan Gosling star as Mia and Sebastian, an actress and a jazz musician pursuing their Hollywood dreams — and finding each other — in a vibrant celebration of hope, dreams, and love.

Damien Chazelle’s magical interpretation of the City of Angels is destined to be a modern classic and an icon of the era. The home entertainment release includes the breathtaking film to watch again and again, as well in-depth bonus material revealing the untold story of how Damien’s passion project came to life. The 4K Ultra HD, Blu-ray and Digital HD special features include audio commentary by writer/director Damien Chazelle and composer Justin Hurwitz, and 10 behind-the-scenes featurettes including: “Another Day of Sun: They Closed Down a Freeway” which gives a behind-the-scenes look at how Damien Chazelle and his team had only two shoot days to make the film’s spectacular opening number a reality; “La La Land’s Great Party,” looking at the creation of the Hollywood Hills party scene; “Ryan Gosling: Piano Student” showing how hard Ryan Gosling worked to truly play the piano as Sebastian; “Before Whiplash: Damien Chazelle’s Passion Project,” that uncovers the story of La La Land’s origins; “La La Land’s Love Letter To Los Angeles,” in which the term La La Land is explained; “The Music of La La Land” delving into the process of creating the iconic music; “John Legend’s Acting Debut” featuring the Grammy®-Winning singer’s thoughts on being in the film; “The Look of Love: Designing La La Land,” with interviews with the film’s design team; “Ryan and Emma: Third Time’s the Charm,” marking the third time in which Ryan Gosling and Emma Stone have starred on screen together, and “Epilogue: The Romance of the Dream,” exploring the extraordinary ending to the film. The 4K Ultra HD, Blu-ray and Digital HD also feature “Damien & Justin Sing: The Demos”, showing the original pitches for the film. The 4K Ultra HD and Blu-ray of Deepwater Horizon will feature a Dolby Atmos soundtrack remixed specifically for the home theater environment to place and move audio anywhere in the room, including overhead.