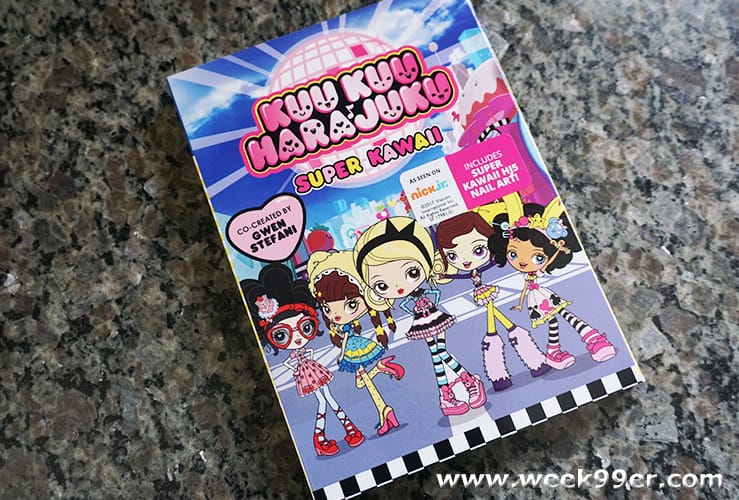 Music is such a huge part of our lives. We may not think about it every day, but if you hear a song it can take you back to a time and place and even remind you of a feeling. It’s something we’re all exposed to early as kids and something that can have a big influence on kids. That’s exactly why musician Gwen Stefani created Kuu Kuu Harajuku, a musical cartoon series for kids.

Kuu Kuu Harajuku is an episodic animated short series that was made with young girls in mind. The songs are meant to inspire and uplift young girls and tell them they can be themselves. The show encourages and celebrates creative self-expression, imagination and individuality and we absolutely love that message. That’s why we’ve partnered with Shout Factory Kids to give away a copy of Kuu Kuu Harajuku, Super Kawaii that just came out on DVD today! Read below how you can win a copy of your own – and rock on!

Check out a clip from the DVD below:

From the mind of Gwen Stefani comes the world of KUU KUU HARAJUKU. The animated series comes to DVD in North America from Shout! Factory in collaboration with DHX Media. The second installment, KUU KUU HARAJUKU: SUPER KAWAII, contains 12 episodes from Season One, as well as new interviews with the show’s voice cast and will be available on DVD on September 26, 2017.

KUU KUU HARAJUKU: SUPER KAWAII is available now for pre-order at Amazon.com and ShoutFactory.com. Initial shipments of the DVD contain nail decals of fun KUU KUU HARAJUKU-inspired emoticons (while supplies last). The 2D-animated series currently airs on Nick Jr. in the U.S. and on Family Channel in Canada.

The animated series KUU KUU HARAJUKU follows the fun-filled adventures of the band HJ5 – Love, Angel, Music, Baby and G – through their super cute world of music, fashion and style. The inspiration for this popular animated series came from Grammy® Award-winning musician Stefani who wanted to create an animated series for girls that encourages and celebrates creative self-expression, imagination and individuality.  The show’s setting is inspired by the exuberant street fashion and creative youth culture of the Harajuku district but it takes place in a magical fantasy world like nothing you’ve ever seen before.

Join Love, Angel, Music, Baby and G — five totally talented members of the super cool band HJ5 — as they return with 12 more hard-rocking tales! With help from their loveably incompetent manager Rudie, HJ5 travels all over the globe to put on shows for their fans! That is, of course, if they can actually get through the crazy adventures keeping them from their gigs! But together, HJ5 will do what it takes to perform … and maybe even save the day!

Also, check out the “kawaii” soundtrack to the much-loved TV series, available for download now on itunes.com and Amazon.com, or stream it on Apple Music and Spotify.  HJ5: KUU KUU HARAJUKU features the show theme and five new songs from the hit children’s television series including, “Dancing in the Sunlight”, “Change It Up” and possibly the cutest call to arms ever, “All For One”!

Also launching is a new KUU KUU HARAJUKU fashion doll and small doll line from Mattel that infuses popular Japanese harajuku fashion, and allows girls to customize and create their own fashions with interchangeable outfits and accessories. The line includes product based on singer G, plus Love, Angel, Music and Baby. Each best pal adds her unique personality to her fashion, band and fun.

Enter to win with the form below. Tell us who your favorite music artist is! Or tell us if you’re already a fan of Kuu Kuu Harajuku! If you do not do this entry – you will not win! So make sure you leave a comment and then enter using the form below!