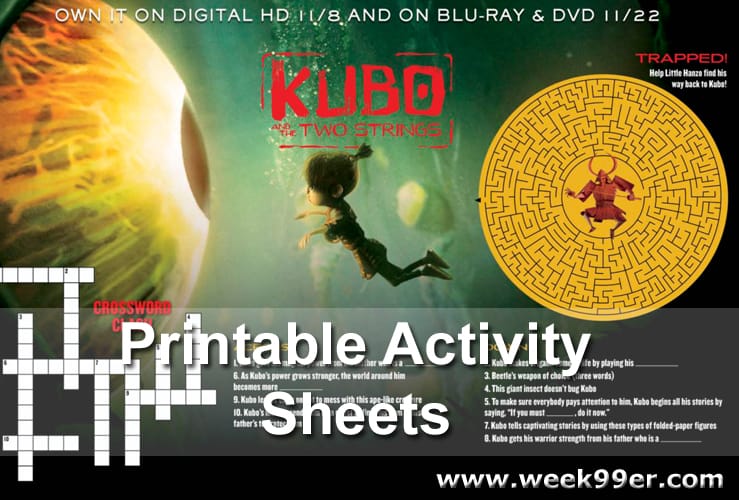 Kubo and the Two Strings is now available everywhere on Blu-Ray and DVD, and one that you will have to add to your collection. The movie is filled with adventure, fun and beautiful stop animation. If you’re already a fan of the film and the story, or you’re new to it – you’re going to love these printable activity sheets. From origami instructions, word search, mazes and more. Just click the image below and save the PDF to print as often as you want. And find out more about Kubo and the Two Strings below!

A young boy with a magical gift sets out on a thrilling quest to discover his family’s legacy in LAIKA’s newest film, Kubo and the Two Strings. The latest masterpiece from the animation studio behind the Academy Award®-nominated films Coraline, ParaNorman, and The Boxtrolls comes to Digital HD on November 8, 2016 and Blu-ray™ 3D, Blu-ray™, DVD and On Demand TODAY from Universal Pictures Home Entertainment. Hailed as “an exquisite, beautiful film,” (Scott Mantz, Access Hollywood) Kubo and the Two Strings has captivated audiences of all ages, earning an extraordinary 97% “Certified Fresh” rating on Rotten Tomatoes, making it one of the best-reviewed films of the year!

From acclaimed animation studio LAIKA comes an all-new epic adventure starring the voice talents of Academy Award® winners Charlize Theron (Mad Max: Fury Road) and Matthew McConaughey (Interstellar). Young Kubo (voiced by Art Parkinson of Game of Thrones) mesmerizes the people in his village with his magical gift for spinning fantastical tales. When he accidentally summons an evil spirit seeking vengeance, Kubo journeys on an action-packed quest to solve the mystery of his fallen samurai father, discover his own magical powers, and reunite his family.

Check out the official trailer below: