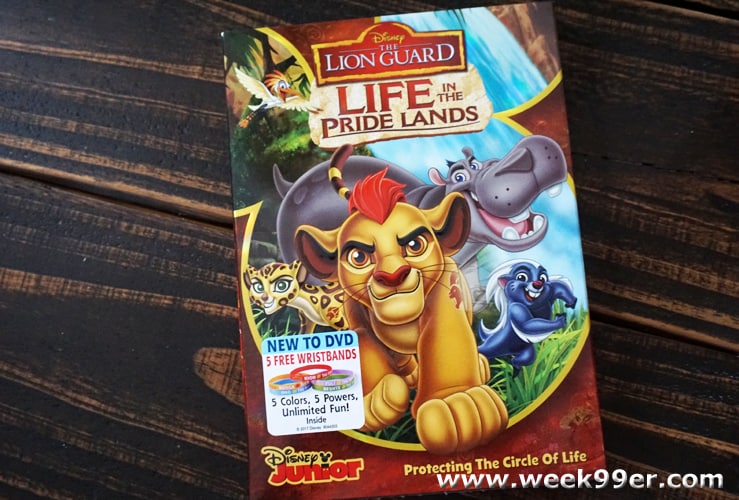 We were sent a copy of The Lion Guard; Life in the Pride Lands to watch before it came out, and love that it’s continuing on the story with some of our favorite characters. Kion is the son of Simba and Nala, and second in line for the throne. Since he’s not destined to rule, he partners with friends from all over the Pride Land to stop bad guys, and make sure everything goes smoothly. The episodes area always a lot of fun, have great songs and focus on teamwork and friendship. We love that they’re still expanding the Lion King series and their stories, and think this is a great addition to the story.

The Lion Guard: Life in the Pride Lands is available everywhere on DVD and has a total run time of 110 minutes and is rated TV-Y. The DVD set comes with 5 wrist bands all in different colors with the names of the Lion Guard team members.

About Lion Guard: Life in the Pride Lands:

Rough, tough and roarin’ to go, your favorite heroes are back for more epic adventures in The Lion Guard, the animated series that continues the storytelling of Disney’s The Lion King.

Join Kion and his diverse group of friends as they celebrate unity within the Circle of Life and protect the Pride Lands in five action-packed episodes also featuring Simba, the spirit of Mufasa and the hilarious antics of Timon and Pumbaa.  You’ll go wild for all the ferocious fun, because whether the Lion Guard team is tracking a rogue leopard, foiling tricky jackals or facing stubborn crocodiles, Life In The Pride Lands is always “hevi kabisa” – totally intense!