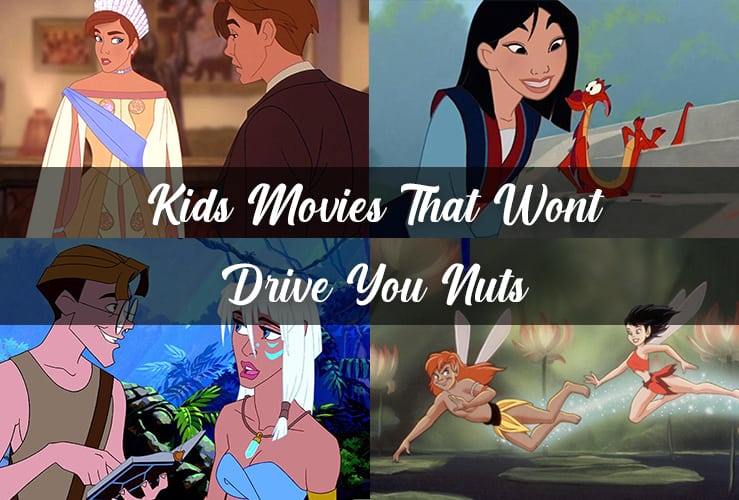 Are you about to pull your hair out if you hear “Do You Want to Build a Snowman” or “Into the Unknown” just one more time. There’s nothing wrong with the Frozen or whatever movie your kids are watching non-stop. But sometimes, just sometimes it’s time for a change. So we’ve come up with some of the best animated movies you can find online right now. Of course there are a ton of others we could add to this list, but these are some of the best that you can watch over and over again that wont drive you nuts.

Onward is the newest in the Pixar/Disney releases and just made its way to Disney+. With a rocking soundtrack and a story about two brothers and their relationship with their father they lost when they were little – the movie is full of heart. While a movie about death isn’t one you’d normally have kids watch, it’s wrapped up in a story of love and a fantasy world – that allows kids the chance to understand the situation and possibly learn more about what their friend’s with only 1 parent might have.

Onward is currently on Disney+ and available for purchase or rental on Amazon Prime.

Anastasia is a princess movie of another kind. Staring Meg Ryan and John Cusack, the movie is loosely based on the story of the missing princess Anastasia Romanov. Toss in some magic, a sarcastic bat and some songs you wont be able to get out of your head – you’re going to want to watch this Princess movie over and over again.

Anastasia is on Amazon Prime as part of a HBO Trial Package!

While we hope that the new live action version of Mulan will be able to hit theaters this summer, we’re still in love with the cartoon version. The songs are addicting, it’s full of girl power and some great fighting scenes.

Mulan is available on Disney+ or you can rent or purchase it on Amazon Prime.

For me, it’s hard to choose which of the Incredibles movies is my favorite, but the super heroes from an every day perspective is always fun to watch! With the mischief that Jack Jack gets in, the retro designs, Edna and the battle of good versus evil – how can you go wrong?

Both The Incredibles and Incredibles 2 are available on Disney+ or for rent and purchase on Amazon Prime.

Do you have a need for speed? We’re not going to even talk about the new Top Gun movie coming out- but the first 3 Cars movies will fill that need for you. (Yes, we’re convinced there will be more!) From the newcomer making it to the championship, to an international tour and turning into a mentor – Radiator Springs has our hearts and we could easily go through a movie marathon with our four wheeled friends.

All three of the Cars movies are available right now on Disney+ but you can rent or purchase them on Amazon Prime as well.

Do you LOOOOVVVVEE KUNNNNG FUUUUU? We do, and Po and Crane, Tigress and all of the rest of the Furious 5! These adventures are full of fun battles, great animation and cute adorable pandas! We absolutely love all three of these movies and they can break up the same ol’ same ol’ pretty easily.

You can rent or purchase any of the Kung Fu Panda movies on Amazon Prime.

Possibly one of the most under appreciated Disney movies out there, Atlantis takes you on an adventure under the sea to find the lost city of Atlantis and meet it’s people. With Michael J. Fox as Milo, and other great actors – Atlantis is full of snarky one liners and fun adventure you will love to watch.

Atlantis is currently available on Disney+ or for rental on other subscription services.

If you’re a child of the 80’s you probably remember Ferngully. The movie that taught us about the rain forest and what could happen to it if we don’t take care of the world around us. It spurred a lot of us to be more eco-friendly in our lives and it’s a movie that is worth a revisit and to introduce to your kids.

Ferngully is available with your Hulu and Amazon Prime Subscription, but can be rented on Youtube and Google Play Videos.