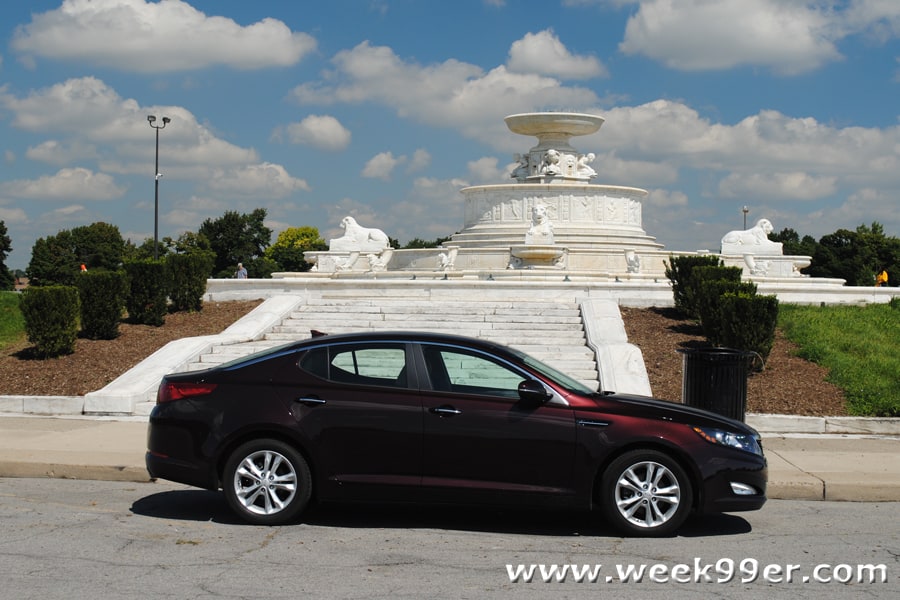 At the end of last month I was on the road (again). It seems to be the story of my summer! But luckily for me Kia delivered a pretty car for me to drive around. Since I was going to BlogHer, I knew I’d need a lot of space – I get a lot of goodies at conferences. Kia delivered an Optima EX – and while it looked small it delivered more on style and space than I expected. 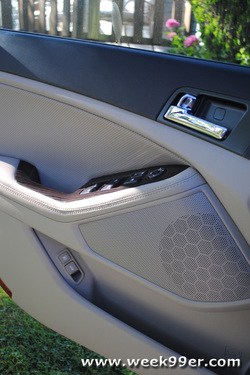 The Kia Optima EX isn’t the top of the line model. It actually is only the first step up from the basic line. But that doesn’t mean it’s a cheap car and it’s lacking all of the goodies you want in the car. I think the main things I noticed that were missing from the EX model (compared to other vehicles I’ve reviewed) were GPS service and heated seats. But it had everything else, satellite radio, duo climate zones, power driver seat with multiple positions, hands free control and several more.

Of course the first thing I had to do when I got in the car was to look for all of the features. The trunk release and gas hatch release are both in the door, and easily accessible for the driver. You also have full control of the windows and mirrors from the drivers door. 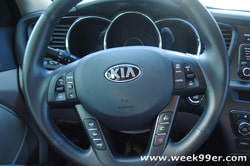 The steering wheel is the main command center featuring cruise control, the voice command buttons to answer calls, volume control for the radio and even the buttons to see how far you’e gone with mileage. You can control everything quickly with these buttons without losing focus on the road.

There are so many buttons but it is easy to figure out what they all do. For me, I always have an issue hitting the “call” button with the side of my hand. I don’t think this is a design issue, more a bad habit of how I hold my hand while driving. I do it at least once with each review car, and quickly learn not to do it again. 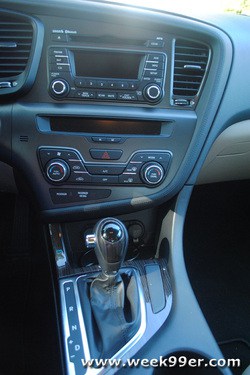 Remember how I said that the Optima EX was only a “middle of the road” model? By looking in the window and at all of the features you wouldn’t know it. The inside is full of chrome, leather and a ton of buttons. Not only did the EX have a CD player and satellite radio but it also had an ipod dock and two lighter plugs where you can charge your gear as you go.

The Kia Optima EX also had a feature that I find almost as a “must have” for newer vehicles – manual shifting. Yes, the EX is a fully automatic vehicle, but you can manually switch up a gear or down if you need it. This is awesome if you just need that extra “oomph” to get up hills or through a rough road patches and if you have a lot of luggage weighing down your car. 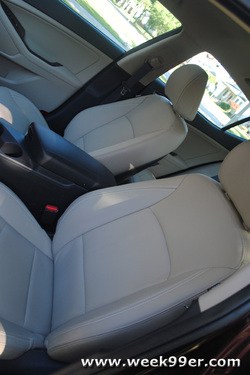 The Optima EX not only boasts a smooth right, but a beautiful interior. Full leather seats for all 5 passengers and plenty of leg room. Remember what I said it was big on space? It was comfortable for all passengers for the ride to Chicago and back to Detroit.

So the most important part when looking at any car – even beyond all of the features and extra goodies – mileage. I took the car to work, back, around town and all of my errands and to Chicago and only had to fill up once. The Optima EX averaged 45 miles a gallon and traveled well – no it’s not even the hybrid model! It also boasts a gas tank that holds over 20 gallons – the initial gas fill up is a bit hard on your wallet but it will last you over 500 miles! 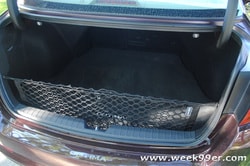 The second most important feature I look for in any vehicle is the storage space. Not only was this important for our trip to Chicago but is in general. For work I have to carry bags of books, design tubes, supplies on a normal day. And let’s not forget my computer and mouse and any other technology for that day. And forget any trips out of town, I pack for a small army. 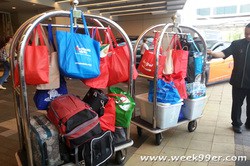 So… we went to Chicago with only a handful of things, and came back with two luggage carts full of goodies. Between the large trunk space and the back seat we filled the car up. But it took it all! It fit everything and we were able to drive home with full visibility. We even had enough space to stop off for Sprinkle’s cupcakes, at the Chocolate Garden for some truffles and a couple other places on the way.

Besides being a stylish ride, the Optima EX took us on our trip in style and luxury. It’s fuel economy and space were exactly what we needed! 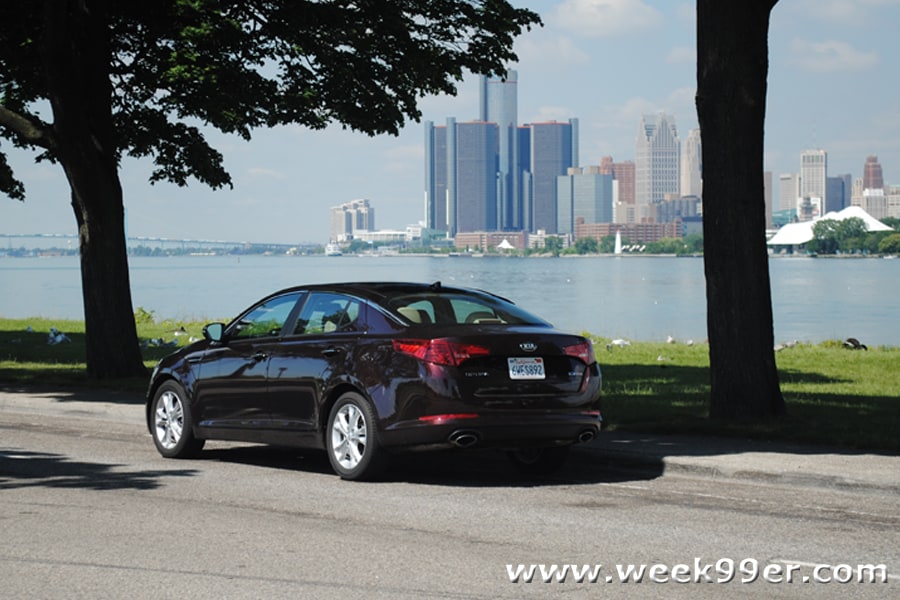