I consider myself lucky enough to be selected to do a review of Jumbies. I’m a child of the Eighties and they remind me so much of one of my favorite toys growing up I almost squealed with happiness.

You are probably asking yourself – what are Jumbies? That’s exactly what everyone asked me when I told them how excited I was to review them. Jumbies are small stuffed animals (about the size of bean bag animals) that are baby animals. The Story of Jumbies explains that they were being taken to their new families when the Storks carrying them collided and they got all jumbled up. Not knowing what to do, they put all the jumbled up baby animals on one island and called them Jumbies. There are Blabbits (Blue Bird + Rabbit), Camelots (Camel + Ocelot) and even Dingbats (Dingo + Bat). The poor little Jumbies are just looking for a home and some nice kids to love them. 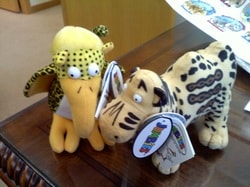 When my package of Jumbies showed up I was very excited. I was sent Arthur the Camelot and Leopold the Leopird (Leopard and Hornbilled Bird). Both animals were so cute and creatively done. The combination of the animals are fantastic and capture that child like imagination of their new owners.

The Jumbies came with a small book that tells the story of how they came to be, with the request that you read this to your child and have them go look for a Jumbie after the story is over. I loved this idea and had my nephew sit down for the story.

With him snuggled close I read him the book and asked if there was a Jumbie in the house – he quickly answered no (not knowing that they were hidden in Grandma’s office earlier that day). I told him he may want to search the house and see if there were any around. His father took him around the house until they found the Leopird. He ran out happy he had found a Jumbie! We’re not 100% sure why, but he has decided that the Leopird has been named Chucky – but that’s what happens when a toddler names a toy :).

In our house, Jumbies are appreciated and enjoyed. Children love them and we smile remember the toys we use to play with as kids. I think they’re a fantastic toy, and unique gift idea for kids and adults.

Please take a few minutes to go check out the Jumbie Website, and explore the different types of Jumbies that your little one could adopt. You can even play games or download coloring pages and request limited edition Jumbies sand dollars on their website!

But wait – there’s more! Jumbies has allowed me to do a giveaway to my fans! Enter below to win a Jumbie for your little one (or yourself)!

90 thoughts on “Jumbies – Review and Giveaway!”