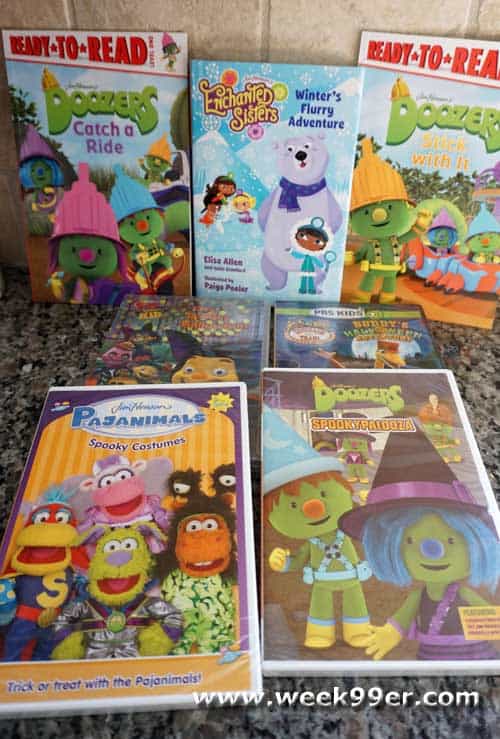 It seems this week, we’re talking a lot about big anniversaries for companies we have grown up with and loved since we were little. While a lot of the characters we have known our whole lives have been around for our parents generation and even longer. The Jim Henson Company first launched in on September 24th, 1965 and since then the company has brought to life characters and shows that now four generations have grown up with and loved. To celebrate their 60th anniversary, the Jim Henson company sent us a great prize package of movies and books with some of their favorite characters – and the shows are just in time for Halloween and Christmas! They’re also giving a set to one of my readers, but be sure to keep reading to find out how you can win below.

I’m sure we all know who Jim Henson is, but in case you don’t – he was a genius puppeteer, artist, inventor, screenwriter, actor, film director, and producer, and brought the world such indelible characters as Kermit the Frog, Miss Piggy, Fozzie Bear, Animal, Gonzo, Rowlf the Dog, Bunsen and Beaker and others, collectively known as The Muppets.  He also created the Sesame Street Muppets like Ernie & Bert, Big Bird, Cookie Monster and Grover.  In addition to creating The Muppet Show and the first three Muppet feature films, Jim also conceived the awe-inspiring fantasy film The Dark Crystal; the stunning visual-effects laden live-action feature Labyrinth; the perennial favorite, Fraggle Rock; and numerous other beloved titles like Emmet Otter’s Jugband Christmas and The Storyteller.

You probably know these classic titles from your own childhood, but you may not realize that The Jim Henson Company continues to create favorite childhood friends with some of the most popular and acclaimed children’s programming titles available!  Today, Jim Henson’s children continue to own and run the uniquely independent and creative company he founded, and under the leadership of Lisa Henson (CEO) and Brian Henson (Chairman), the company continues to create fresh, new characters and fantastical worlds that speak to today’s audiences, abiding by the essence of the Henson brand – innovation! We think you’ll know them all!

In the Jim Henson Company’s gift basket are 4 movies: Dinosaur Train: Buddy’s Halloween Adventure, Doozers: Spookypalooza, Pajanimals: Spooky Costumes, Sid the Kid: Sid’s Spooky Halloween and 3 books: Doozers Catch a Ride, Doozers Stick With It, Enchanted Sisters: Winter’s Flurry Adventure. One lucky reader will win a set for their family. Read how you can win below!

Enter to win with the form below. Which is your favorite Jim Henson Character or Show? Or who would you give this prize package to? If you do not do this entry – you will not win! So make sure you leave a comment and then enter using the form below!